People are reading
You are at:Home»Restaurants»Do You Know Who These Men Are? 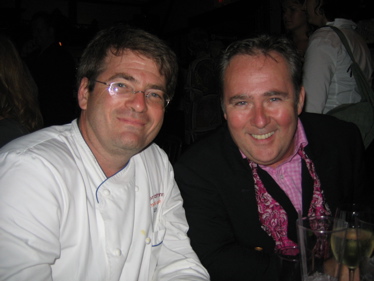 And what they have in common?

I snapped this photo at the donor dinner for the Make-A-Wish Foundation at Crabtree’s Kittle House in Chappaqua last Thursday, which I was covering as much for the food as for the fundraising. Besides being for a good cause, these types of events Ã¢â‚¬â€ where chefs are at tables, offering tastes of their signature dishes Ã¢â‚¬â€ are an excellent way to see who’s cooking what in the Lower Hudson Valley. (This one is especially touching because children who had their wish granted tell the story of how it happened and what it meant to them. If you donate to Make-A-Wish, you are invited to attend.)

A few of the dishes that stood out were Iron Horse Grill chef-owner Phil McGrath’s passionfruit tarlet Ã¢â‚¬â€ a single bite of tart-sweet with a plump blackberry on top; the spicy tuna tartar that Jeff Raider, chef of Valley Restaurant at The Garrison, served; and the quail by Equus chef David Haviland. I also loved the earthy lamb ragu by Zuppa chef David DiBari, but boy was it hot that night Ã¢â‚¬â€ I mean sticky-gross hot Ã¢â‚¬â€ and his dish wasn’t the kind of thing you really wanted seconds of in that weather.
Which brings me to this photo. (They do look a little warm, don’t they?)

On the left is Jon Pratt, the chef-owner of Peter Pratt’s Inn in Yorktown and Umami Cafe and MexiGo, both in Croton-on-Hudson. On the right is Ned Kelly, the general manager and maitre d’hotel of Freelance Cafe & Wine Bar in Piermont. After the event was over, we got to talking, and I realized these guys go way back. Jon told Ned that Ned’s sister Eileen Ã¢â‚¬â€ one of 12 siblings in the Kelly family, including chef Peter X. Kelly Ã¢â‚¬â€ used to babysit for Jon when the Kellys lived in Croton.
Then Ned told Jon that he remembered attending his 6th birthday party. (Yes: 6th.) Apparently Jon’s late father, Peter Pratt (the man for whom the restaurant is named), used to work at WFAS and he rounded up all the kids for little Jon’s birthday party and took them down to the station to record a song promoting the restaurant. Ned said something like “What a fun idea for a birthday party!” Sure, and you get a free commercial out of it!

A worthwhile event with good food and a funny story. What more could you ask out of an evening?