People are reading
You are at:Home»Restaurants»Barbecue at Bailey’s 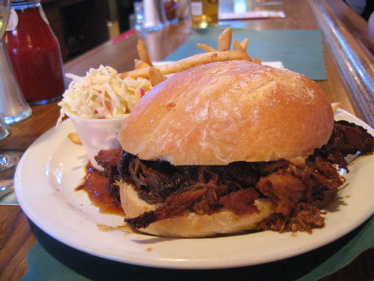 Bailey’s in Blauvelt is one of those old-school Rockland County pubs: knotty pine paneling, red-checkered plastic tablecloths, sports memorablia. But recently, it got an infusion of here-and-now with a Southern Pride smoker and a barbecue chef from New Jersey.

I stopped in for dinner on Monday night. The jukebox was loud and the bar was raucous with women out celebrating after softball. We took three seats at the bar and ordered the three barbecue specials on the menu: ribs, chicken and the pulled pork sandwich. 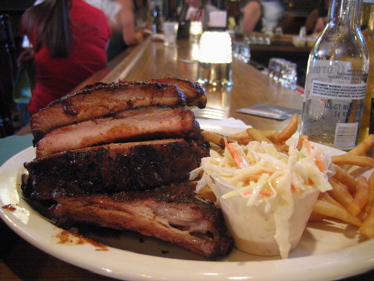 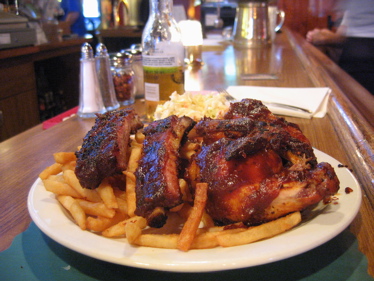 After we ate, I asked to see the smoker, mainly because I didn’t detect a lot of smoke in the meat. When I was introduced to Dave “Fink” Finkelstein, the chef, I found out he is the same guy made famous over on eGullet for his Fink’s Funky Ribs and Chicken restaurant in NJ. (It has since closed. <a href=”http://forums.egullet.org/index.php?showtopic=7521&st=0″ target=”_blank”>If you’re interested in the history, here’s a link.</a>) Turns out, there is indeed a smoker at Bailey’s: a big Southern Pride that used to be at Stickey’s in Teaneck. Dave uses cherrywood Ã¢â‚¬â€ not the kind of smoke I”m certainly used to having grown up in Texas. Mesquite is more my bag.

We got to chatting and Dave said the new menu would be up and running in a few weeks. They’re keeping the wings and the pizzas, but everything else will be barbecue-Southern style. He’s going to be doing some Creole and Cajun stuff, too, like catfish (I like to pronounce that caitfish, btw) and gumbo. I look forward to trying that, and we’ll be writing about Bailey’s (and its renovation: the downstairs is almost redone) in our restaurant preview in September.

Even without the hickory or mesquite flavor I’m used to in my barbecue, the ribs were my favorite. Dave makes all the sauces himself, and the ribs have a dry one. The pulled pork sandwich was, to my tastes, too sweet. But that’s the glorious thing about barbecue: it certainly inspires opinion. I’m looking forward to going to back to try all kinds of stuff: we just don’t have this kind of food in Rockland. (Especially the bar-b-ruben, which I saw photos of on the link below and it looks aweseome.)

As I was writing this, I googled Dave and Fink’s and found this other thread on eGullet with tons of photos of the food and of the smoker.

<a href=”http://finksfunky.net/” target=”_blank”>And here’s Fink’s Web site.</a> (Sorry ’bout that broken link before: I just went in and fixed it.) 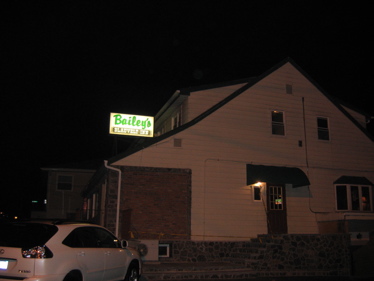