People are reading
You are at:Home»Restaurants»Goldfish in Ossining 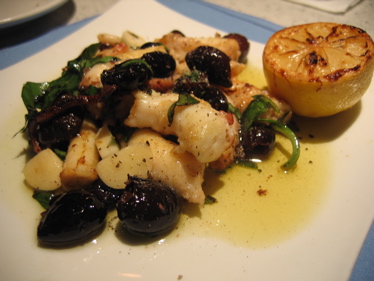 (sarcasm) <a href=”http://lizjohnson.lohudblogs.com/2006/08/23/where-for-dinner/” target=”_blank”>No thanks to your suggestions, readers, </a> (/sarcasm) I headed over to <a href=”http://www.goldfishdining.com/” target=”_blank”> Goldfish, </a> the seafood restaurant in Ossining that celebrated its two-month anniversary yesterday. I had an excellent meal that wasn’t too spendy.

That up there is my octopus appetizer. You know how octopus can be sometimes? Too chewy, not fresh, yuck. Not this version. The olives, garlic, lemon and basil were nice accompaniments to a nicely grilled, clean-tasting dish. (Though I could have done with a bit less olive oil.)

I can’t believe this is the same place that used to be Dudley’s. Dudley’s was dark. A little dank, even. Its centerpiece was an old wood bar, and the room had nooks and crannies and a low ceiling. You knew the place had been around a long time. It was, in fact, once a speakeasy. I saw the trap door that led to an underground tunnel to the river (for liquor deliveries) when I was reporting a story about Dudley’s excellent wine list. (I was also told there were phones in the old bar for reporters to call in their stories about executions at Sing Sing down the hill. And that the lights would dim in the restaurant when they pulled the switch at the prison.)

But you wouldn’t know any of that lore by stopping at Goldfish. It’s modern, light, airy and comfortable. Just avoid the seats right in front of the open kitchen Ã¢â‚¬â€ the light from above the stove and on the right wall glare too much. 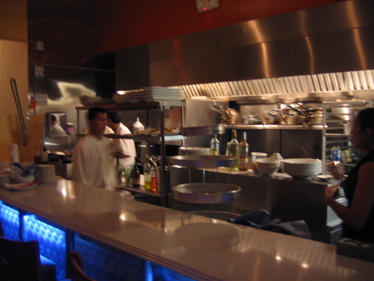 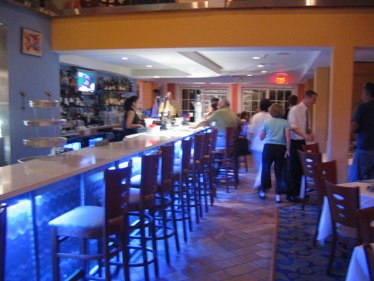 We sat at the bar. We usually sit at the bar. It was nice of the bartender to offer us a drink list. Goldfish has a creative cocktail list, and the drinks really are good: not syrupy and sweet Ã¢â‚¬â€ even my grapetini, made <a href=”http://www.ciroc.com/agecheck/?source=http%3A%2F%2Fwww.ciroc.com%2F” target=”_blank”> Ciroc vodka, which is made with grapes </a> (don’t ask me how that’s vodka, I don’t know), champagne (which is definitely made from grapes) and white grape juice (which, strangely, sometimes has apple juice in it). 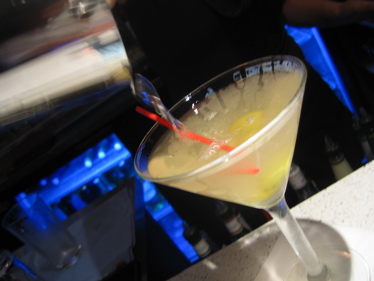 The drink is garnished with grapes, too.

Besides the octopus, we got fried oysters as an app. Look how gorgeous: 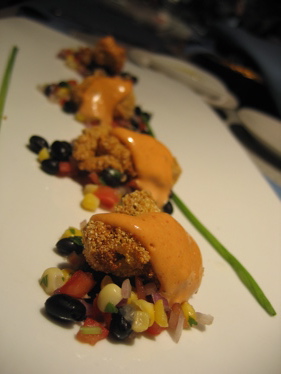 A lovely black-bean corn relish with tomato and a smoky chipotle aioli made this dish the winner of the night. 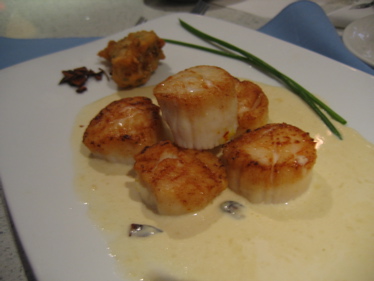 Ã¢â‚¬â€ and an appetizer portion of mussels in a tomato-saffron-tarragon broth that was well worth mopping up with the side of truffle fries we got. 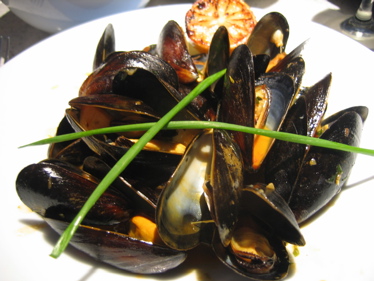 (Here’s the sauce after the mussels were gone!) 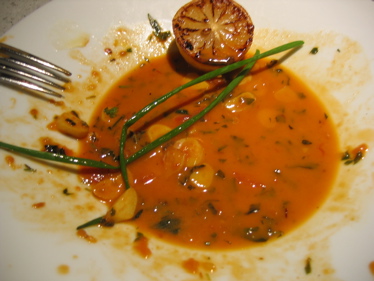 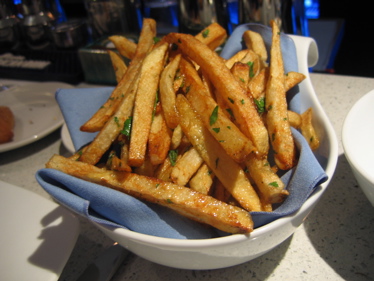 They were doused with truffle oil, which made them look slick.

I’m not really a dessert person, but I figured since we were trying out the restaurant, we should try the dessert. I wish we’d tried a different one. We thought we were being adventurous (and recognizing the creativity of the restaurant) by ordering what’s called dessert sushi.

Sounds gross, right? Well Ã¢â‚¬â€ not for the reasons you think. It’s not fishy or anything, it just wasn’t so good. It had a frozen strawberry inside and a few rice kernels and was covered in too much chocolate. (Too much chocolate. Weird, huh?) 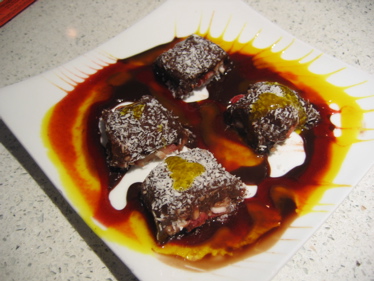 Everything else about the restaurant was great. We had a good time, people were friendly, and no one even asked why I was taking so many photographs. I guess they thought I liked the mascot. 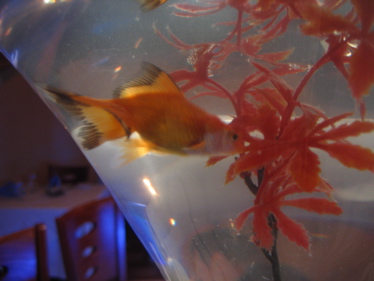 He swims at the bar in, appropriately, a big cocktail glass. 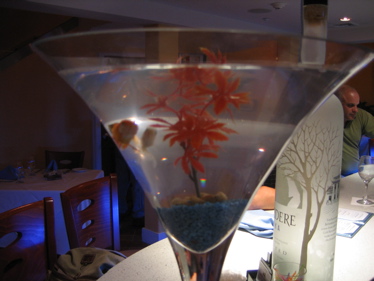