People are reading
You are at:Home»Food Links We Love»Fish Report No. 1: C&M in Pomona 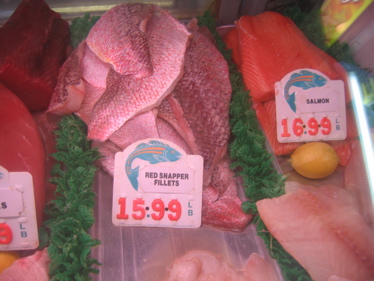 I was impressed. One great thing: Tuna not yet cut. I like to ask for steaks at least two inches thick, because I like to sear them over very high heat and keep them rare in the center. At C&M, you can watch as theyÃ¢â‚¬â„¢re cut. 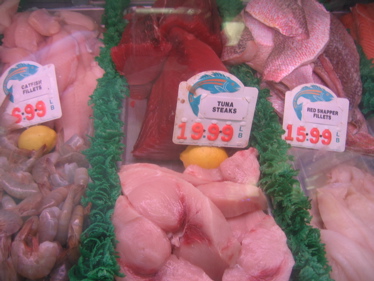 You can also help yourselve to the oysters, clams and mussels, all of which are living in a frosty bed of ice on the far wall. 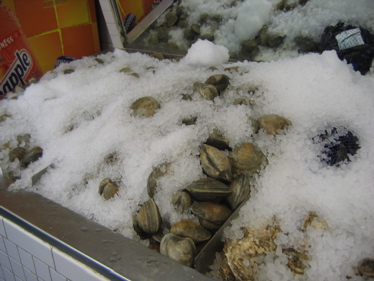 I like the selection, too. Halibut, grouper or snapper? Tuna, swordfish or salmon? One minor complaint: not too many whole fish. Though to be fair, I didnÃ¢â‚¬â„¢t ask whether they were available in the back.

I did ask for a recommendation, though, and was pleasantly surprised. I told the fishmonger I was interested in cooking the filet en papillote Ã¢â‚¬â€ meaning steamed in parchment paper. (Though I used foil.) He suggested a couple of different possibilites for me, including poddock, halibut and grouper. I went with the grouper.

The usual kitch decorates the shop: Hanging nets, oars and other nautical items, but all in all itÃ¢â‚¬â„¢s a clean shop with a nice selection and friendly service. 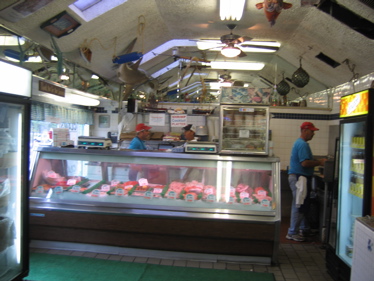 HereÃ¢â‚¬â„¢s how I cooked the fish, from a Food&Wine recipe in the February, 2003 issue. It took about 20 minutes and tasted like it took all day. I highly recommend it:

Preheat the oven to 450 degrees. Melt the butter in a medium saucepan. Add the shallots and cook over low heat, stirring occasionally until soft and golden, about 5 minutes. Add the wine and simmer until almost evaporated, about 3 minutes. Whisk in the coconut milk, fish sauce, lime juice, red curry paste and sugar and simmer until slightly thickened, about 5 minutes. You should have about 3/4 cup of sauce. Remove from heat.

Cut four 20-inch sheets of heavy duty aluminium foil or parchment paper. Set 1 sheet on a work surface and turn up the edges slightly to make a shallow bowl so the curry sauce wonÃ¢â‚¬â„¢t leak out. Spoon 1 tablespoon of the sauce on 1 side of the sheet and set a fish fillet on top. Season with salt and pepper and spoon 2 more tablespoons of the sauce on top. Top with a basil sprig. Fold the foil over the fish and, starting at one corner, fold the edge over itself in neat pleats so it slightly overlaps the previous one to make a tight seal. Repeat with the remaining curry sauce, fish fillets and basil.

Slide the papillotes onto a cookie sheet and bake them on the bottom rack of the oven for 12 to 14 minutes or until puffed. Remove from the oven and let stand 2 minutes.

Food&Wine says to put the papillotes in a bowl and open them up so people can eat the fish right out of their packages. But I made mine in foil and I donÃ¢â‚¬â„¢t want my fork scraping against foil as IÃ¢â‚¬â„¢m eating, so I used a spatula to transfer the fish onto a plate. Then I made a spout out of the foil and poured the extra sauce on top. However you want to do it: it tastes great.

To drink: Food&Wine recommends drinking a pinot blanc or chenin blanc from the Loire Valley.