People are reading
You are at:Home»Restaurants»ZzeST in Suffern 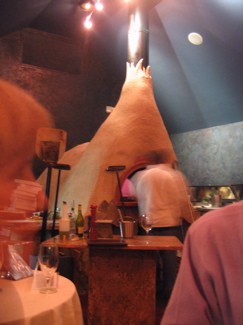 This clay and brick oven was imported from Italy. It landed at a new restaurant in Suffern: <a href=”http://www.zzestny.com/” target=”_blank”> ZzeST. </a> (People. Please. Stop with the music on Web sites. If I want to hear music, I’ll go to iTunes or turn on the Peak. Sheesh. You can’t even turn that off!) I dined there with my folks the other day. The food was pretty good, and everyone is thrilled to see a new place in town.

We got a little lost on the way because we thought it was in downtown Suffern. It’s actually at the light just after the big strip mall if you’re coming from the Airmont Road exit off the Thruway. Take a left onto Campbell. (The road is called Hemion if you turn right.)

Our greeting at the door was confusing. We checked in and the host just said: “OK.” We didn’t know if that meant we were going to our table? Was he going to take our coats? Should we get a drink at the (very loud and crowded) bar? After milling about a minute or two, we decided to take the third option.

The glasses of wine come with little carafes, which is nice. 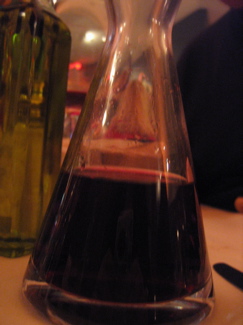 Now, into the dining room:

Once we were settled, it took us a while to decide what we wanted. There are TONS of choices.

I adored the oysters.

Some of you may remember Gregg Schwack from Pastels, which was in Orangeburg. He had a nice raw bar selection there, too, and has brought that to ZzeST (Why the double letters? Why the capitals at the end?)

We also quite liked the Belgian-Style Mussels with shallots, cream, chimay beer, crispy potatoes and rouille. (What a mouthful!) 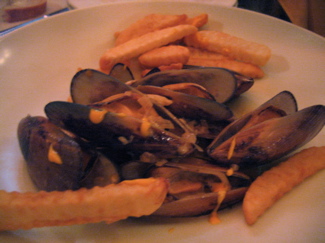 And this was one of the best dishes of the night, a special soup, English Pea with Proscuitto: 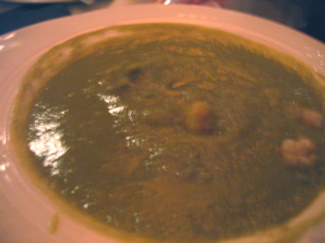 (Forgive the horrible photos. The restaurant was dim and I won’t use a flash.) 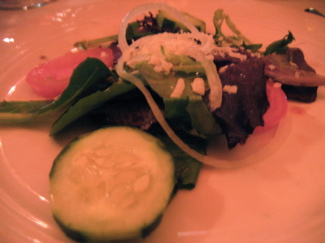 I ate some, but wanted to save room for my Kobe beef: 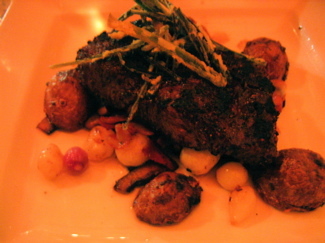 It came with pearl onions, mushrooms and a truffle glaze. I couldn’t much taste the truffle. The beef was cooked perfectly. 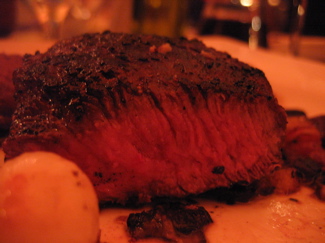 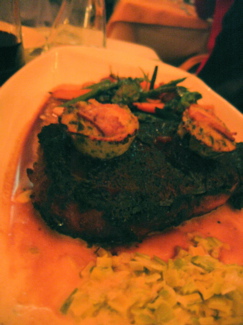 I think you can tell from the menu description that that dish could use an edit. (Everyone needs an editor.) It tasted good, but there’s so much going on it’s hard to know what to focus on.

The focusing part was true for most of Zzest. We also tried the poached cod, too, and a tilapia. But the menu is so big, we didn’t know whether to choose pizza, that fancy Kobe beef dish, oysters or old-school Italian like veal, shrimp or chicken, which can be prepared any of five ways: picatta, marsala, parmigana, francaise, or grilled.

Take this dish, for example: 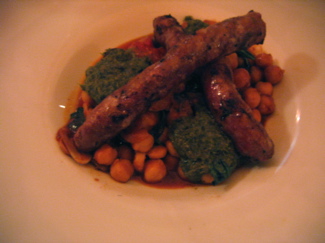 Wood-oven roasted sausage with chick pea puree and broccoli rabe puree. I ordered it because I’d had another rendition recently at <a href=”http://www.gustonyc.com/” target=”_blank”> Gusto </a> in Manhattan. Here’s a photo of the Gusto version: 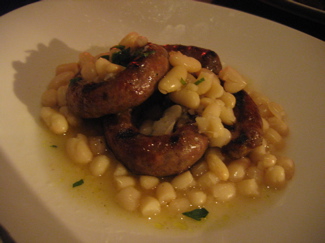 Gusto’s, which was made with white beans and without tomatoes, was deeply satisfying. ZzeSTs, while good, was just lacking a little oomph. Like the flavors just weren’t quite coming together Ã¢â‚¬â€ probably because there were too many of them. You can tell from the photo that ZzeST’s has a lot more going on the plate. (Just like it does on its fancy Web site and its crazy-long menu and the emphasis on the letters in its name.) Gusto’s is just perfectly simple and delicious.

I’m giving the restaurant the benefit of being a newbie, though. It just opened in January, so they’ve still got sea legs. I’d like to see them stand up straight and take a stand for what they’re focusing on. They’re really on to something with a brick oven and a raw bar in a casual but cool setting. I, for one, am going back for pizza and pasta. I hope I get another carafe for my wine. 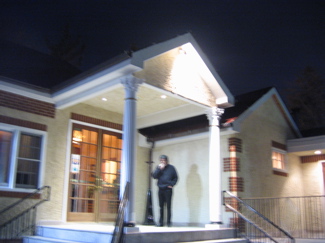