People are reading
You are at:Home»Restaurants»First Look: Morgans Fish House 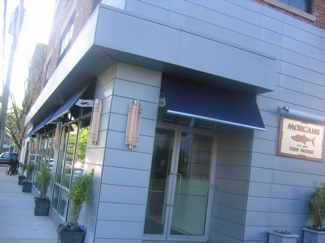 I was the first patron to get a legal pour of wine at Morgans Fish House yesterday. They’d just gotten the liquor license that afternoon.

The restaurant used to RK…An American Bistro. It was sleek Ã¢â‚¬â€ all white. But an all-white room can be unwelcoming, like you’re afraid you’ll track mud into or spill your red wine. That’s changed now: 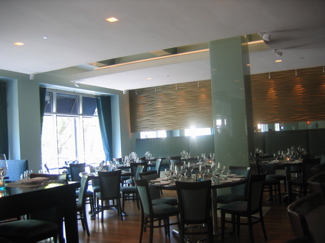 The restaurant is owned by the Pearl Management Group Ã¢â‚¬â€ partners Jim Sullivan, Jan Fabry and Lisa McKiernan. They also own Ruby’s Oyster Bar & Bistro in Rye, the Rye Grill, the Elm Street Oyster House in Greenwich, Conn., and Lexington Square Cafe in Mount Kisco. Mark Filippo, who was at Cafe Meze for a dozen years, is the chef.

Like Pearl’s other restaurants, it’s upscale-casual. You can wear jeans, but the food isn’t dressed down.

Lisa took me on a little tour, explaining that they chose a blue from the terrazzo in the bar and used it to warm up the restaurant. It’s a perfect color for a fish place, don’t you think? 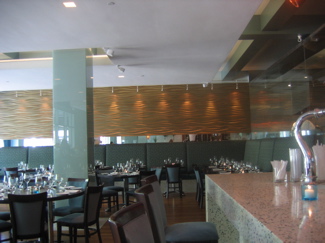 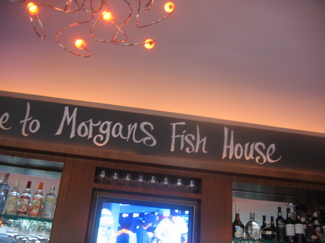 Those of you who have been to Ruby’s will recognize the tall communal table theme: 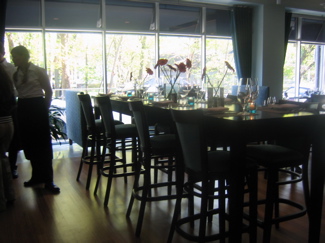 And if you’d been to RK before, you’ll surely remember the big open kitchen. Here’s a shot looking toward the dining room. That’s Jim on the left and Mark on the right: 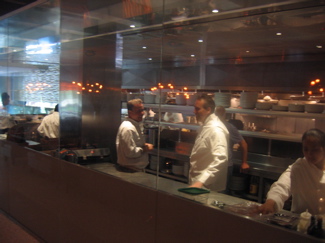 Across from the kitchen used to be a long straight banquette. Now it’s cozy little nooks: 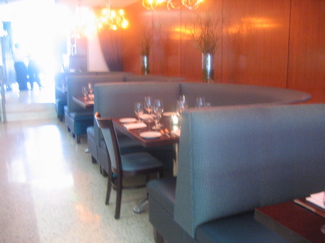 They also expanded the bar. It used to be the coat room: 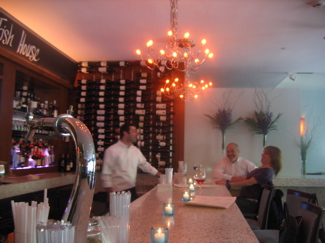 <br>If you’ve eaten Mark’s food before, you’ll know what to expect. Influences from the Mediterranean. A good balance of delicate and bold. Pristine ingredients. (Fans of his signature dish Ã¢â‚¬â€ the artichoke ravioli with truffle oil Ã¢â‚¬â€ will be pleased to know it’s on the menu.)

One cool thing, though it’s not ready yet: After they’re open for a little while, they’re going to be doing “appetizers for the table.” For a set price, you’ll get a sampling, served on tiered plates. Brilliant idea.

Of course, the menu is heavy on fish.

I tried the tuna carpaccio:

Fantastic. It’s similar to a dish he served at Meze, except that one had octopus. <a href=”http://lizjohnson.lohudblogs.com/2007/01/26/behind-the-scenes-at-chefs-dish/ ” target=”_blank”> (Remember it from this meal?) </a> This one is topped with lobster. Jim Sullivan recommended I try it and I’m glad I did.

Right now, it’s tough to get in to Morgan’s. Like I said before, Mark is not looking for a lot of hype. But I’m very excited about this new addition to the scene. I think it’s going to be a winner.