People are reading
You are at:Home»Restaurants»Dinner at One in Irvington 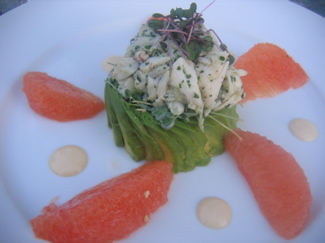 I met a couple of my friends for dinner at <a href=”http://www.restaurantoneny.com/” target=”_blank”> One in Irvington </a> last night. I’ve been before, but once for lunch and once for a couple of appetizers. <a href=”http://lizjohnson.lohudblogs.com/2006/12/06/a-first-glance-at-one/” target=”_blank”> Here’s my post on that visit. </a> So this was my first real meal there. That was the avocado-crab salad, and it was my favorite dish of the night.

Here’s the official title from the menu (which I’m getting from their web site, so it may or may not be exactly what we had): Jumbo Lump Crab and Avocado Salad: Fresh Hearts of Palm, Micro Basil, Ruby Grapefruit, Miso-Ginger Dressing. $17.

It was light and refreshing and very well balanced.

This was pretty tasty, too: 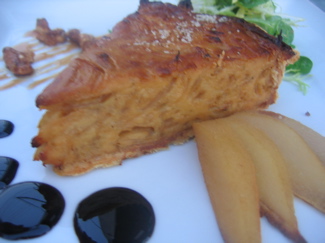 I thought it might be a little too wintery, but Ã¢â‚¬â€ even though the sultry tasting spices on the pear took it into fall Ã¢â‚¬â€ it was pleasantly light enough to work, even on as hot a day as yesterday.

Speaking of the day, indulge me while I share these photos of the setting sun. We sat outside, and the view was spectacular, as long as you can overlook the parking lot. 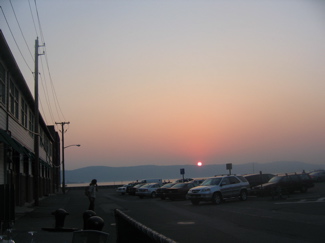 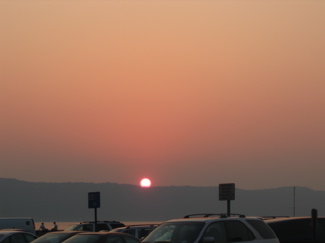 The bartender was waiting the tables outside, which seems like it might be a disaster, but actually worked very well. The service was friendly and professional, with just a little bit of chumminess that I like.

The meal started with these amuses bouches: 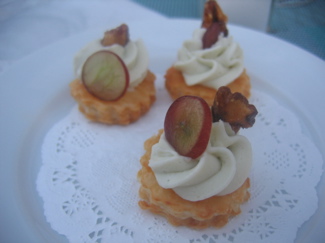 It tasted fine, but it was very similar to the amuse I had the last time I was there. Check it: 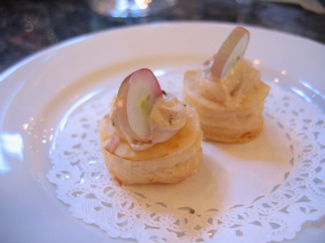 This was foie gras mousse, served back in December, but still. Mix it up!

Here was our other appetizer, Yellowtail tartare. 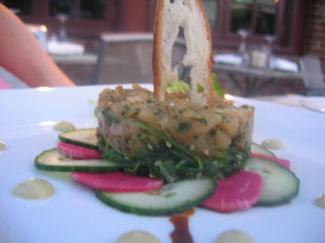 These flavors are very assertive. You couldn’t much taste the fish. Though the texture was nice.

For dinner we shared two entrees among three of us. Hey, we’re girls. We want room for dessert. BTW, just for giggles, here are my friends: 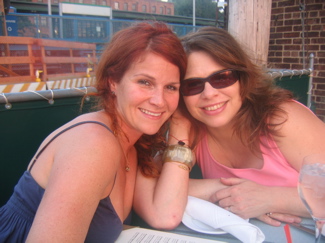 Back to the food. Here’s the chicken: 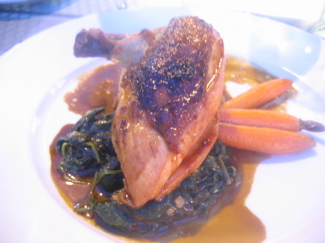 I like this OK, but I was really expecting fresh figs. The carrots were awesome.

My friend Kelli, who’s on the right up there, adores this salmon dish. She goes to One a lot with her husband (who loves to sit at the bar because they have three plasma TVs up there for watching sports, BTW) and she orders this salmon every single time. 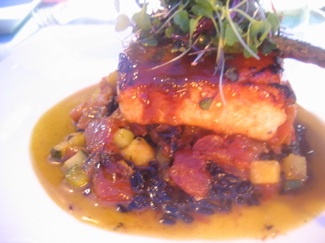 I loved the way the fish was cooked. It was treated thoughtfully and with care. The sauce was a little sweet, but it’s a good dish.

I was pretty full, so I only took a couple bites of dessert. Our waitress said she loves the peanut butter torte. 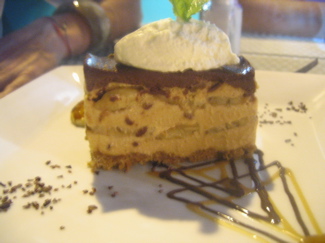 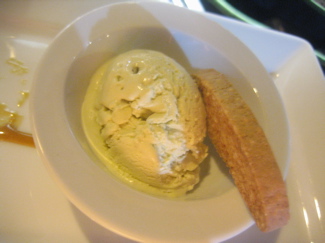 Ã¢â‚¬â€ which came with the strawberry rhubarb crisp: 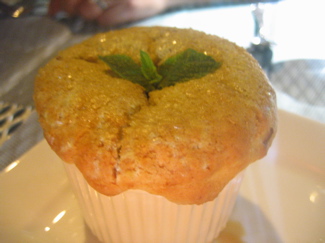 The ginger biscuit alongside the ice cream was also genius.

Overall impressions: Good cooking, especially on the left side of the menu. A little expensive. Very cool space, even outside. <a href=”http://lizjohnson.lohudblogs.com/2006/12/06/a-first-glance-at-one/” target=”_blank”> Check out my other post to see inside. </a> But a worthy addition to the dining scene. People in Irvington are lucky to have it, but I’d drive from the other side of the county Ã¢â‚¬â€ and yes, I’d even cross the bridge.