People are reading
You are at:Home»Recipes»Gazpacho Three Ways 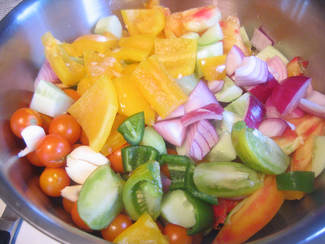 I do love gazpacho. I guess I must. I made it three times this weekend. That photo above is a step during the second time. Colorful, huh?

The first time was at the Cold Spring Farmers Market Saturday morning. I went there with chef Jeff Raider of Valley Restaurant at the Garrison. Once again, this was all about the Locally Grown Recipe Contest. Have you entered yet? Only 10 days left! You can win $600 worth of prizes Ã¢â‚¬â€ a $300 gift certificate to mypersonalfarmers.com and a $300 dinner at Valley Ã¢â‚¬â€ and four semifinalists will win the chance to cook in a “Top Chef”-style competition against your fellow contestants in the professional kitchens of Valley. Those same semifinalists will attend a dinner at Valley honoring local farmers where the winner will be announced. If I weren’t judging the darn thing, I’d enter myself!

But I digress: we went there to promote the contest, but also to cook, or rather blend, gazpacho. We were making Jeff’s recipe, which uses bread. Here is my colleague Randall Wolf’s photo of him slicing it: 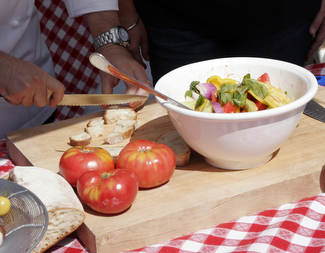 Using bread is the traditional way to make gazpacho Ã¢â‚¬â€ and the reason it was invented in the first place: to use up stale bread. Some people call it a liquid salad. And I guess that’s a good description. People seemed to like Jeff’s! 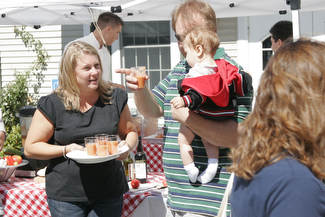 (That’s another of Randall’s photos. The rest in the post are mine.)

So after we made that soup, I made two more versions this weekend, and neither uses bread. My longtime gazpacho recipe is really simple: 5 pounds tomatoes, 1 cuke, 1 green pepper (though this time I used yellow), 1 red onion, 2-3 garlic cloves, oil and vinegar. I like to strain it through a sieve so it’s smooth, too. Not traditional, but the way I like it. This weekend, I harvested a bunch of my green zebras Ã¢â‚¬â€ 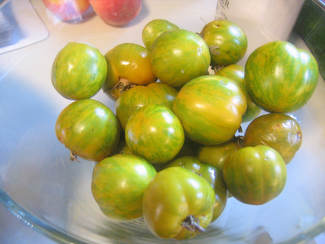 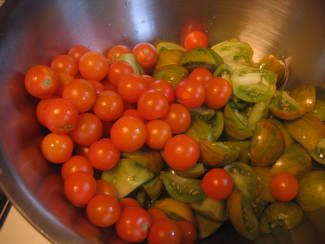 I didn’t have quite 5 pounds, so I added one more big tomato. I can’t remember the variety at the moment: 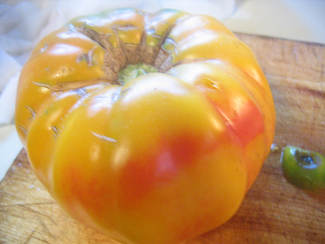 Chop everything up into chunks, like in that top photo, and blend: 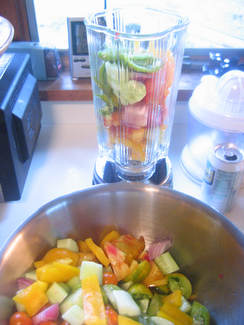 Yes, you’ll have to to do it in batches. That’s OK. While one batch is pureeing, you can strain the previous one through the seive: 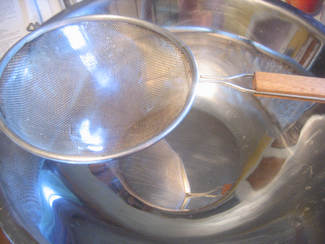 Each batch came out a different color, depending on what was in the blender. In the end, it came out a sort of dull yellow color. Oh well. Interesting at least! 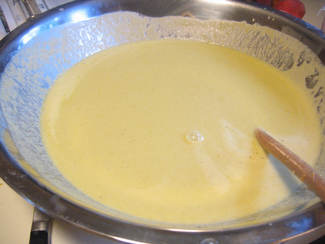 For my third batch of gazpacho, I decided to try a recipe from Food & Wine. This is an even less traditional recipe. It uses watermelon. It also asks you to blanch the tomatoes to remove their skins. Have you ever done that? You core the tomato and then score the bottom with a big X. 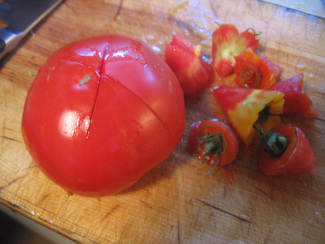 Then you drop the tomatoes into boiling water for about 30 seconds, until the skin looks crinkly. Then pull them out. Normally, I drop them into a bowlful of ice, but the recipe in Food&Wine suggests just leaving them out to cool. So I did that while I prepped the other ingredients. The skins came right off: 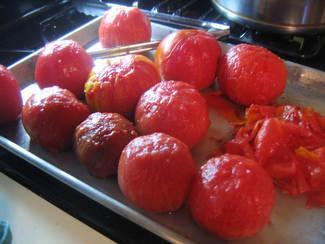 I won’t bore you with the rest of the prep. Let’s just say that between the ripe red tomatoes and the delicious local watermelon (purchased for this week’s Farmers Market Loot!). The soup came out as red as could be. 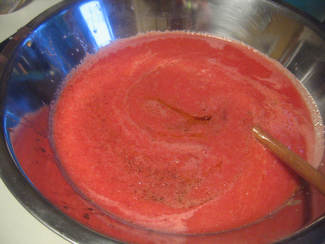 I’m still waiting on a taste test, but I’ll give you the recipes. Which kind do you prefer? Chunky? Smooth? Traditional? Modern? Tell me in the comments.

Also, vote for your favorite recipe in the poll on the right side of this blog, and don’t forget to enter the contest! Happy tomato season!

Liz’s Smooth Tomato Gazpacho
5 pounds tomatoes (about 6 to 7 large), cored
1 cucumber, peeled and seeded
1/2 green pepper, cored and seeded
1/2 red onion
1 jalapeÃƒÂ±o, seeded
3 cloves garlic, smashed and peeled
1/2 cup olive oil
1/2 cup red wine vinegar
Salt and pepper
Chop all the vegetables into large chunks add them to the bowl of a food processor. Add the olive oil, vinegar, salt and pepper and puree until smooth. Strain through seive into a bowl. Refrigerate until cold, up to 3 days.
Garnish with avocado and tomato chunks.
Yield: 8 servings.

Bring a large pot of water to a boil. Add the tomatoes and blanch until the skins are loosened, about 30 seconds. Transfer the tomatoes to a large rimmed baking sheet and let cool.

Peel the tomatoes and halve them crosswise. Working over a coarse sieve set over a large bowl, squeeze the tomato halves to release the seeds and juices. Press on the seeds; you should have about 2 cups of tomato juices in the bowl. Coarsely chop enough of the tomatoes to make 4 cups. Cut the remaining tomatoes into 1/2-inch dice.

In a food processor, puree the coarsely chopped tomatoes with the reserved tomato juice and the 2 cups each of chopped watermelon and cucumber. Transfer the soup to a large bowl. Stir in the diced tomato, watermelon and cucumber, the vinegar and 1 tablespoon of the olive oil and season with salt and pepper. Refrigerate until chilled, at least 1 hour.

In a small bowl, mix the scallions, jalapeÃƒÂ±os, cilantro and lime juice; season with salt and pepper. Ladle the soup into bowls, drizzle with the remaining 2 tablespoons of olive oil and sprinkle the chives on top. Pass the scallion relish at the table.
Active time: 40 minutes.
Total time: 1 hour 40 minutes.
Yield: 12 servings.