People are reading
You are at:Home»Restaurants»A Very Fine Meal at Monteverde 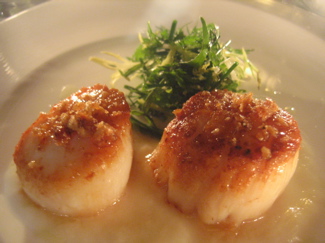 I just can’t believe what’s happened to our food scene in the last year or so. Neil Ferguson, the chef at Monteverde at Oldstone Manor, is just one example. His sense of balance on the plate and the palate is something to be admired. In one dish Ã¢â‚¬â€ scallops with an onion puree Ã¢â‚¬â€ I found sweet, crunchy and earthy, and bitter, creamy and bright. All in one bite.

I was the first in my party to arrive, so I waited with a glass of wine at the bar. 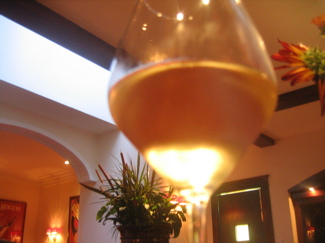 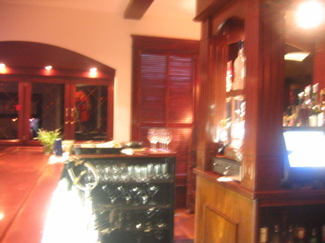 It’s a comfortable room, with wood trim and a nice floral display: 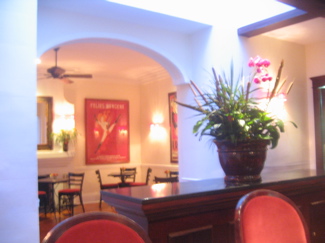 See that red velvet? That’s the vibe of the dining room, too Ã¢â‚¬â€ though I don’t have any photos of that. There are white tablecloths, and red carpet matches the red velvet walls. It’s a little boudoir-esque, but fun, in an old-school kind of way.

We sat outside, though, where the views of the Hudson really take your breath away. Lucky for us, the sun set, because it would have been hard to choose what to pay more attention to… the views or the food. 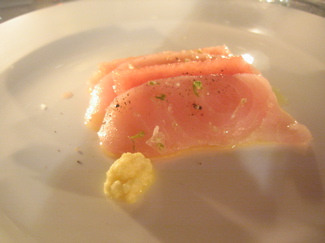 (Sarawak is in Borneo… it’s where the pepper comes from.)

The watermelon wasn’t sweet like the kind you eat out of hand at a picnic in August. It was there more for texture. But it did have the slightest bit of sugar, which played nicely with the ginger. The textures had a lot of fun playing with each other, and the salt was like the twinkle of the first star at dusk.

I wasn’t kidding when I said I found all those flavors and textures here. There was sweet( scallops and onion), crunchy (walnut, plus the sear of the scallop) and earthy (bacon), and bitter (herbs), creamy (puree) and bright (those herbs again). 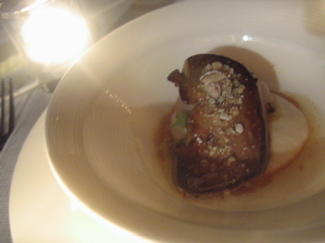 I loved what Neil did with turnips here. They retained their earthy Ã¢â‚¬â€ almost dirty Ã¢â‚¬â€ flavor, and still worked really well with the sweetness of the foie.

Can you feel fall in the air? Guess what’s next? 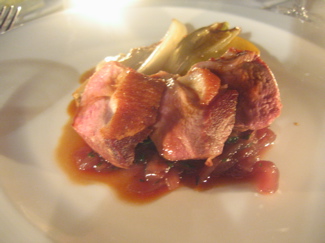 This was luscious. Bitter endive, sweet duck. And a great wine pairing, thanks to general manager Glenn Vogt.

Please don’t kill me Ã¢â‚¬â€ but none of the photos came out for that. I must have had a bad setting on my camera. It was so delicious that I finished my friend’s portion, too.

Not that we had any room, but we tried a few of the desserts. 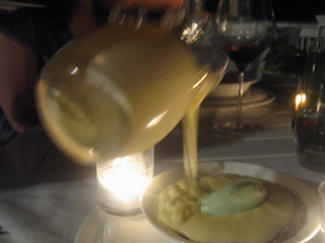 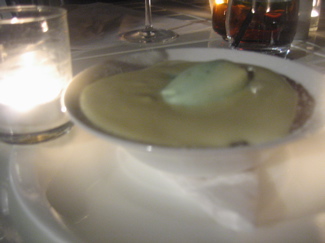 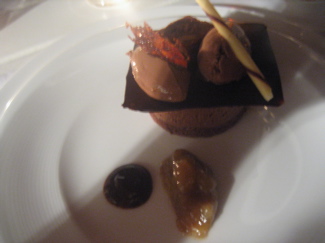 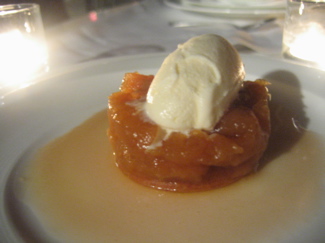 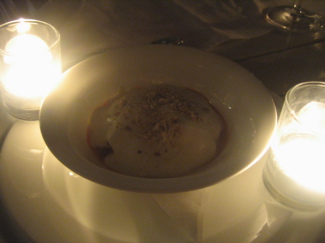 All the desserts played on the same field as the savory courses: a nice blend of textures and flavors, yet they were satisfying enough for any sweet tooth just looking for a nice end to the meal.

I’m really thrilled that Monteverde now has the kind of talent in the kitchen to stand up to the grandeur of the setting. (And check out Neil and Glenn at Allen & Delancey, owner Richard Friedberg’s new restaurant on the Lower East Side. It is set to open this week.)