People are reading
You are at:Home»Restaurants»Best Thai Food: An Introduction at Sripraphai

Come along, everybody. I’m working on a story for Rockland and Intown Westchester magazines about the best Thai food in the Lower Hudson Valley. 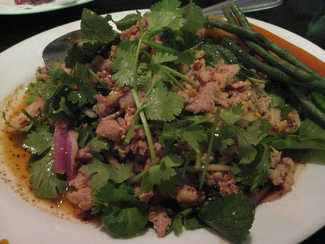 I’ve traveled in Thailand and done my scholarly research too, learning about the influences of Chinese and Indian cooking in Thai cuisine, learning about incorporating the five flavors (salty, sweet, bitter, sour and spicy) and the essence of good balance. But, I thought â€” before I start, I need to pay a visit to what most people say is the best Thai restaurant around: Sripraphai in Queens.

I’ve always wanted to to Sripraphai (pronounced see-pra-pie), ever since I heard rumblings about it online in the late 90s. I’m sorry I waited so long. Above, is the larb, made with chicken, mint, cilantro, chilis, lime juice, fish sauce and toasted rice, which gives it a lovely crunch a little like pop rocks. It was well-balanced and had more fish sauce than I’ve tasted at other Thai places, which perhaps try to dumb down that flavor, which, since it tastes salty and fermented, might not appeal to all Americans. And man oh man it was spicy. It had me reaching for my Singha over and over!

Speaking of Americans, they do give us foreigners a picture menu along with the regular menu at Sripraphai. 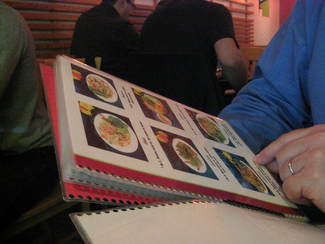 It’s kind of funny â€” it matches up with the regular menu by number and letter. So, for example, if you’re interested in the Tom Kai Gai soup, which, on the printed menu says S-8 “Chicken soup with mushrooms, coconut milk and galanga,” you can turn to S-8 in the picture book and get a look at it, and see the English translation of its Thai name.

Or, or course, you can just order it and see what comes out: 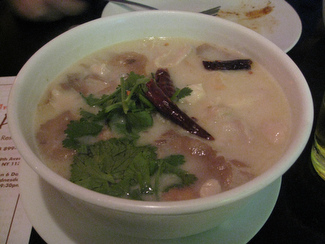 It was delicate â€” not salty and overwhelmed by coconut milk as so many version are. It had depth and balance, with just a bit of spice from the chili, sweetness from the coconut and brightness from the herbs. I knew I had to save room but I couldn’t stop eating it.

I’ve heard Sripraphai used to be a dump. After it got a ton of press, including a two-star review from The New York Times, it went for a makeover. It’s cleaned up nice. Here’s a look around: 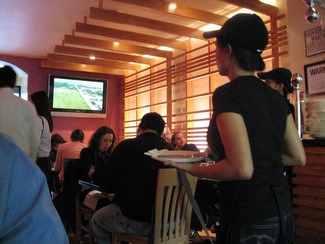 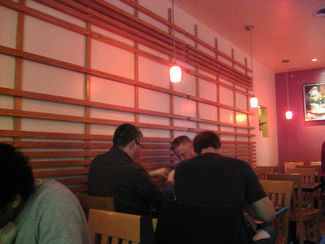 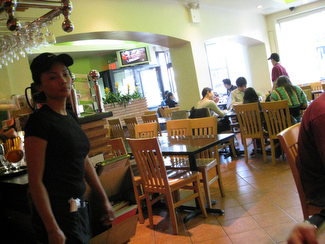 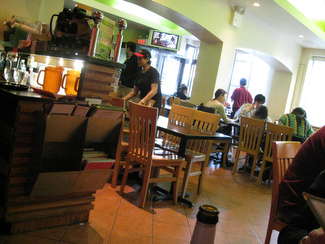 There’s a garden out back: 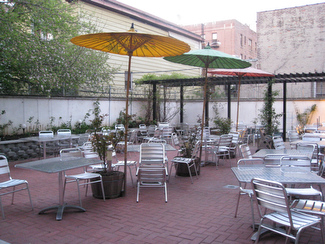 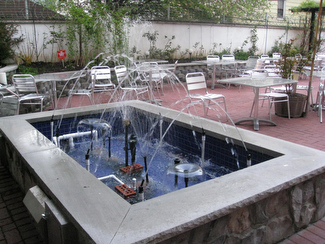 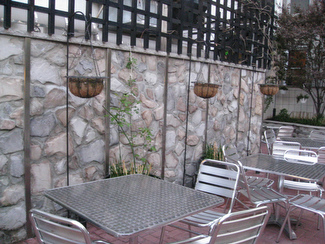 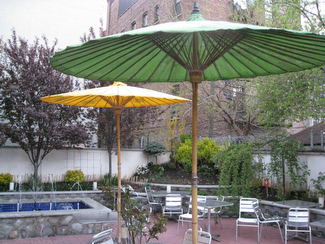 One of my husband’s favorite Thai dishes is chiekcn with basil. On the menu here it’s called “Choice of ground meat with chili and basil over rice.” 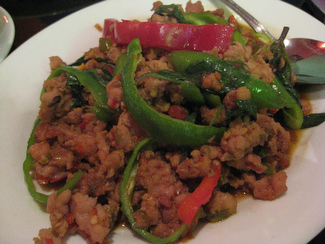 I’m not used to this dish coming with ground meat â€” I’ve always had it with slices of chicken. But the flavor was nice: not too spicy but enough heat to make you notice.

Green curry with chicken and eggplant: 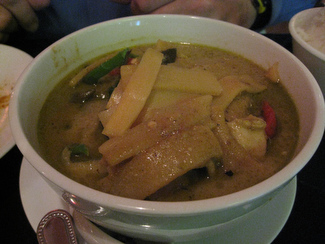 This is going to be the curry by which I measure all others. You could drink it like a soup: it wasn’t all thick and laden with coconut, yet had enough thickness to coat the rice and permeate the vegetables and the meat.

This is the dish everyone was raving about, the roasted duck salad: 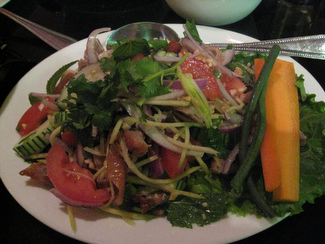 I know why now. The duck was meaty and soft, the cucumbers gave it crunch, there was salt and crunch from the peanuts and the mint and cilantro made it fresh. I could have this every day and find new things to love about it.

Unfortunately, we were only two, and that’s all the food I could eat in one sitting. But knowing we wouldn’t be back soon, I decided to get a pad Thai and a massaman curry to go. I won’t judge it on its presentation, but I think the flavor will hold up until lunch today. I’ll let you know.

My only regret? We didn’t get the fried fish with mango sauce. Nearly every table had it and they looked very happy indeed. 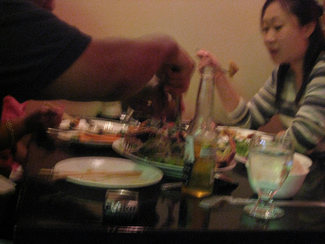 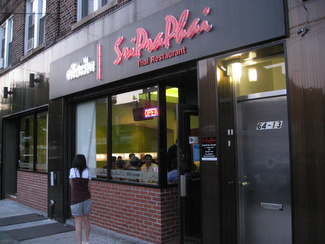 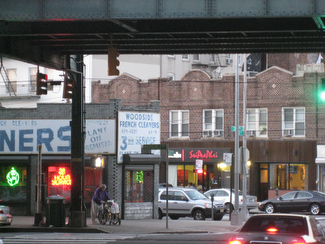