People are reading
You are at:Home»review»Thai House, Nyack

On my quest for the best Thai in the Lower Hudson Valley, Rockland is first. I might be a little biased when it comes to the Thai House. It’s been my Thai house of choice for years. 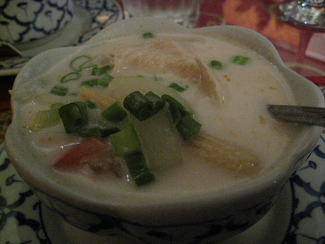 There has been many a Sunday night â€” at least when I’m not out at my folks house grilling in the summer â€” where my husband and I have curled up in front of the television with Thai takeout from the Thai House. Tom Kha Gai soup usually starts the meal.

But here’s the good thing about having had years to judge a restaurant: you notice the little things. The soup is still satisfying and good (I love the baby corn and the mushrooms), but lately it’s been awfully salty. This visit was no different. I don’t know if it’s the broth or the fish sauce, but it’s almost unbearable sometimes. Tonight it was just slightly salty. The coconut milk is sweet, but not too much. 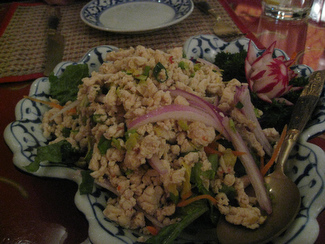 It didn’t have the spice of Sripraphai, but then again, we didn’t ask for it. The other thing I would have liked to have seen was mint. This version is served only with cilantro. It’s good, but was missing something. On a side note, check out the carved radish around 1 o’clock in the photo above. The Thai are known for elaborate food carvings, and Thai house always has beautiful presentation, even for takeout. Seriously. You get that little radish in the aluminum tin.

And look at the cucumbers that come with the satay. The sides are carved with a zester for contrast. The plates are beautiful, too, aren’t they? 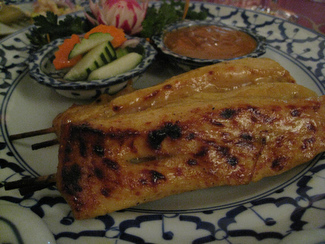 The satay was juicy. I hate when it’s a shriveled up piece of chicken. The peanut sauce was very sweet. 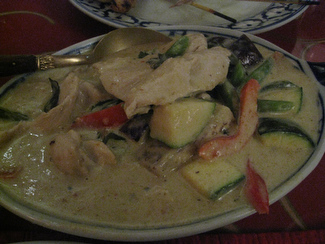 Delicious. Nice balance, especially on the heat. The vegetables, even the eggplant, are cooked perfectly, just a little al dente. 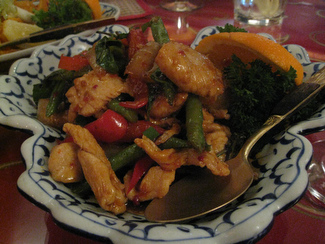 I liked this version even better than Sripraphai, especially because it has chunks of chicken instead of ground meat. I know that in Asian cuisines, meat is secondary to grains, but the ugly American in me likes more protein.

The spice-sweet balance on this was like a see-saw. Some bites hit you with chili, others with sugar. I liked this because I’ve also tasted this when my husband asks for it very, very spicy. It’s unbearable. 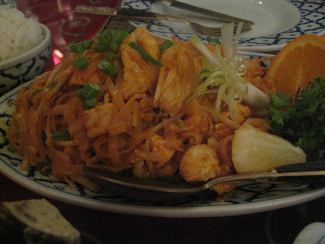 It was a little sticky and sweet, but once I squeezed the lemon it was all good. Crunch from the peanuts, soft from the noodles, a little watery from the bean sprouts. Not as earthy as it could have been, and no spice whatsoever.

I know I’ve got along way to go, and I’ll reserve judgment. But as it stands, it’s going to be tough to knock Thai House out of the running for top Thai. 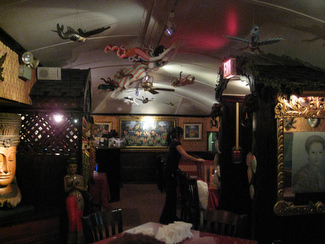