People are reading
You are at:Home»Restaurants»First Look»First Taste: Velo in Nyack

Velo, the new wine bar and bistro in Nyack, is an exciting addition to the restaurant scene. The energy is upbeat, the wines are eclectic and the food rarely takes a misstep. I’ve been twice and tasted most of the menu â€” and not a single dish was a failure. In fact, most were home runs â€” especially the fabulous chianti risotto with black truffle. 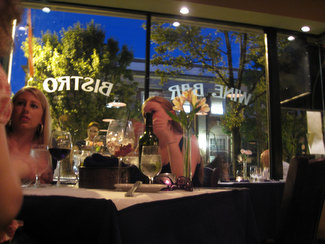 The wine list offers many by-the-glass and half bottle options and it changes frequently. I started with a lovely rosÃ©. Look at that red color! 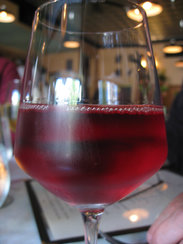 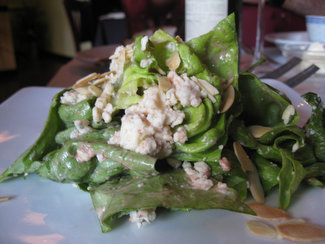 Not my dish but I had a taste. Perfectly acceptable and the cheese was nice with the fruity dressing.

The fried oysters ($12) come in this adorable wooden box. I’m not usually a fan of fried oysters (I prefer them raw and sometimes I think frying makes them slimy), but these were out-of-control delicious. Crisp, not too big, not too hot. What a nice nibble. 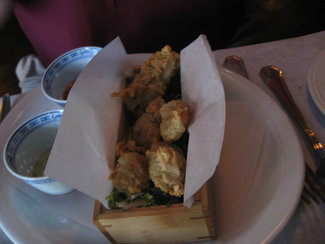 Arugula, shaved fennel, sea scallops, citrus vinaigrette, roasted chickpeas ($13): The fennel brings a good contrast to the arugula and I really like roasted chickpeas (they’re kind of like pea-shaped French fries), but the scallops â€” while nice â€” would have been better warm. 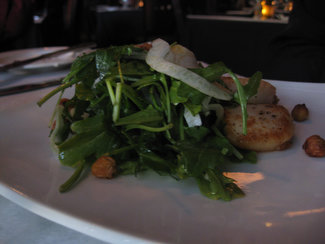 This goat cheese tart rocks. It’s reminds me of something that might come out of my favorite cookbook (Patricia Wells “At Home in Provence”). Goat Cheese Tartlet with Caramelized Onions, Thyme, White Wine Honey Syrup ($10): 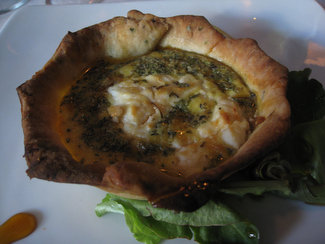 Think of herbed goat cheese but for dessert. Creamy, tart, sweet, herbaceous. It took everything in my power not to order this on my second visit.

We were a table of four so we shared the grilled pizza ($9): 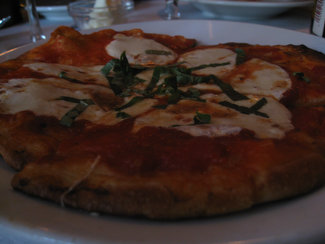 Thin crust, nice sauce, fresh milky cheese. Nice for sharing at the bar over a glass of wine.

After ordering four different apps and a grilled pizza to share and taking photos of each â€” plus with another four different entrees on the way â€“ the kitchen might have started to wonder about our table. Either we’re very curious diners or critics. I didn’t ask why, but chef Anthony DeVanzo sent out a little bonus tasting course of gnocchi with lamb bolognese and pecorino romano. The dish normally sells for $13: 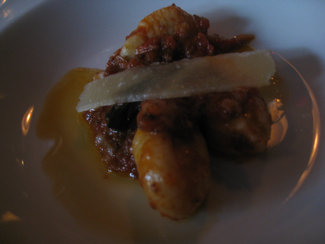 I’m so glad he did. DeVanzo, who used to cook at Two Spear Street and Marcello’s locally, spent four months cooking around Italy, including at the Michelen-starred Agatha e Romeoâ€™s in Rome. Between this dish and the to-die-for chianti risotto with black truffle ($15) that I tried over the weekend (sorry â€” no photo), I can tell already that he has a gift for making amazing pasta. This was mouthwateringly delicious; rich and a bit tangy from the lamb, salty from the cheese and satisfying from the gnocchi. Somehow even with a meaty ragu, it manages to be light. It’s summer and I’m still craving this dish. Same for the risotto. The rice was just al dente and but came together in one creamy bite on the tip of my fork. The truffle taste was there, being seductive, but not flashy. One single shaving permeated the dish.

For our entrees we had the Semi Boneless Free Roaming Organic 1/2 Chicken “Al Mattone” (phew!) with broccoli rabe and pan gravy ($19): 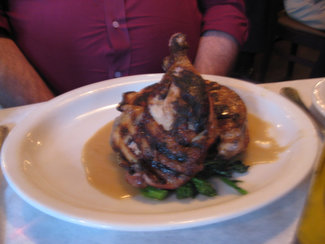 I only had a taste but the meat was juicy and the skin was crispy. 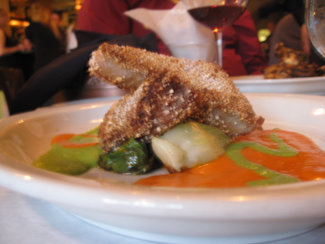 Look how the coulis makes a yin-yang with its colors. This dish tasted as bright as it looks. The tuna was cooked medium rare. 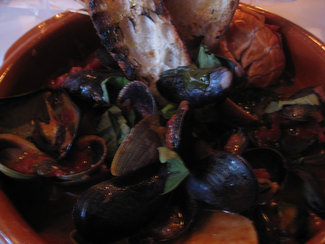 This dish could have been better. The mussels, while not off, were not a highlight. They were rather small and mealy; not fresh and plump. Instead of tasting of the sea, the dish was fishy and flabby. The broth had depth, though, and the other shellfish were better than the mussels. This is the one dish I’ll fault in my two meals. 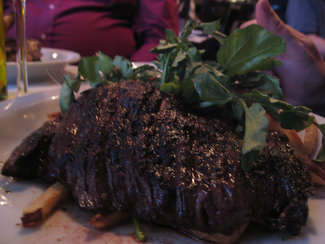 A nice steak. Chewy, but not too much, and nutty from the brown butter. Fries were crispy and salty, too.

We arrived at 7 and when we were finishing up the restaurant started to get really packed. It’s a late crowd. Note how De Vanzo brought back the tin ceiling? And the color scheme is earth tones. Otherwise, not too much of a change from Heather’s. 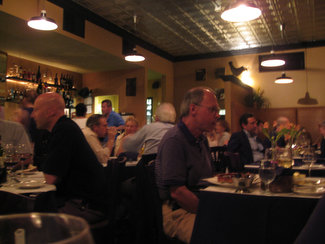 There’s a little lounge area with couches by the door, and there’s a long bar where you can dine. On Friday night I came back with my husband. We tried the fried calamari with tomato chutney (the chutney was great, a little sweet), the Caesar wedge (basically a deconstructed Caesar with the dressing and the croutons on the side), the arugula salad with scallops (again; scallops still need to be warm) and the delicious risotto.

By the way, De Vanzo named the place Velo, which means bicycle in French, because he is himself a biker. Yes, with the uniform and the whole nine yards. When I was there on Friday I got to chatting with him, and he told me he’d ridden down from his home in Pomona that night. There are also little bikes, trikes and unicycles decorating the restaurant.

But I digress. Here’s dessert:

A chocolate port wine semifreddo with pistachio puree. It’s kind of a trompe d’oeil… doesn’t it look like foie gras? 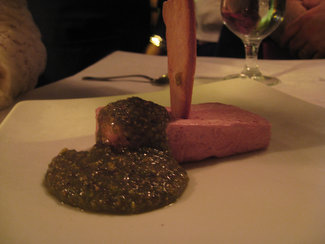 This had a nice texture, but wasn’t knock-me-down cryin.

Donuts. The creme anglais dipping sauce was sweet and addictive: 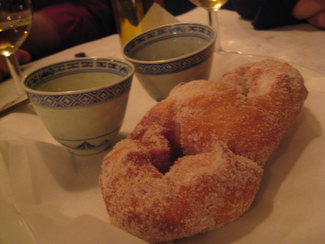 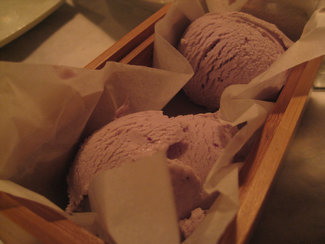 Very nice. All in all a great meal. I hesitate to write about Velo because â€” living in Nyack â€” I want to keep it all for myself. Alas, my duty is to you, readers. So go. Enjoy. Get the goat cheese tartlet. Get the risotto. Choose from among the lovely wines. And rejoice that there’s another great place to eat in the Lower Hudson Valley.