People are reading
You are at:Home»Food Links We Love»Did The Author of “The Waiter Rant” Work at Lanterna Tuscan Bistro?

A commenter over at Grub Street takes a pretty good guess that Steve Dublanica, the author of “The Waiter Rant,” worked at Lanterna Tuscan Bistro in Nyack. 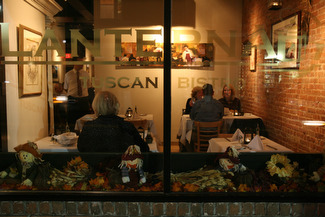 Here are a couple of descriptions of the restaurant, courtesy of Grub Street:

A small, 50-seat restaurant nestled in an artsy neighborhood somewhere in the New York area. A long rectangle tucked inside an old building… It has been open for about eight years….Thereâ€™s a large window in the front.

All signs point to yes.

â€œFluvio,â€ is an ex-chef in his late forties. He is married (once divorced). He opened a second restaurant about two years ago, and then another.

Chef-owner Rossano Giannini opened a second restaurant in Larchmont in 2006, but it has since closed.

Â The menu features … spaghetti pomodoro.. (and) Itâ€™s â€œfamousâ€ for its rack of wild boar.

Well, not rack of wild boar, but it’s famous for its papardelle with cinghiale â€” or wild boar.

The Bistro was briefly identified after Russell Crowe visited it and a fan site revealed its name. However, the Waiter promptly convinced the site to edit out the name.

Hmmm. Russell Crowe? Lived in Nyack for a time. And then there’s this post, “Holy Shit, It’s Alice Baldwin!” The watier lists the other celebs he’s served:

Hmm? Those names sound awful familiar to Rocklanders, don’t they?

The blog describes the sous chef as being from Lucca; in fact, Rossano Giannini is from Lucca.

Still not sure? Well maybe you’ll recognize Steve himself? There’s a photo of him along with this interview in today’s NY Post.Â