People are reading
You are at:Home»Restaurants»Next Week’s Restaurant Review: The Cabin in Greenburgh

I know we did a Westchester restaurant last week, but I’ve got something pretty exciting coming up in Rockland next week, so I thought we’d do a two-fer in Westchester. So this week, Judith Hausman visits The Cabin, an old favorite with a new look in Greenburgh. 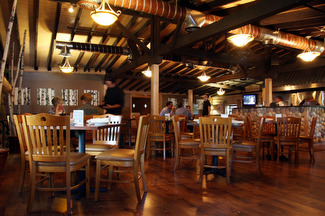 Tell me what you think of The Cabin? I’ll choose a few comments to print alongside the review in the paper on Wednesday.

The review, after the jump.

Judith Hausman
For The Journal News
If youâ€™ve been around Westchester anytime in the last 60 years, you likely know about The Cabin: that old-fashioned, family-run restaurant at the corner of Routes 100, 100A and 100C in Greenburgh, with wood paneling and a menu that covered everything from burgers to eggplant Parmesan to Cajun catfish.

When it closed in 2006, it was to the cries of regulars who had been dining there for decades. Literally. Former owner Jody Bassett â€” who was hired as a waitress at age 19 and married the son of the boss â€” wiped a tear from her eye when remembering some of the old times. â€œThatâ€™s a tearjerker,â€ she told The Journal News when the restaurant closed.

So you can imagine the pressure Steve Cross is under. Heâ€™s only the second owner since 1937, and because heâ€™s completely restored the restaurant, from the log walls to the stonework, heâ€™s got quite a number of peopleâ€™s expectations and memories to contend with.

â€œEveryone has a recollection of a cabin somewhere,â€ he says.
Itâ€™s fun to compare his work to the photograph of the original Cabin on the entrance wall.

â€œWe want Cabin to be comfortable and affordable, a little bit of an experience,â€ says Cross, who is also the owner of Striped Bass in Tarrytown and of Greenwich Lobster House in Greenwich, Conn. â€œAnd nothing on the menu will ever be over $20.â€

His concern with price point and flexibility in todayâ€™s economic atmosphere is evident on the menu. A meal can be as homey as the best-seller Black Angus meatloaf or sliced grilled steak with garlic mashed potatoes at the bar or as elaborate as a catered business function in the banquet room. At lunchtime, the Cabin serves construction crews, business lunchers and seniors; at dinner the crowd segues into families; late at night there are barflies and couples out on the town. There are TVs mounted everywhere and food is served until 12:30 in the morning.

A stone-faced hearth pizza oven dominates the center of the dining room, which is decorated with birch logs and oak chairs and tables. Our welcoming and knowledgeable waitress raved about the garlicky fresh clam pizza, but to us it was (over) perfuming the entire restaurant.

We chose the pizza special instead, a sparer combination of thin, chewy prosciutto and crunchy baby arugula, just sprinkled with grated asiago. We liked it so much we used the crunchy hand-stretched crust to scoop up the spicy marechiara sauce in our other entrÃ©e: a fish special with clams, mussels and tilapia filet. Planked salmon or scallops are other seafood options and casual sandwiches and fries, such as the half-pound Angus sirloin burger and crab-cake BLT, are winners, too.

You could begin a meal at the bar with mini crab cakes, baked stuffed clams (â€œthat made Striped Bass famousâ€), chicken quesadilla or vegetable samosas. Or you could dig into an almond-crusted goat cheese salad, as we did. The raspberry vinaigrette was overly sweet and didnâ€™t taste homemade, but the fresh raspberries and pecan garnishes were nice touches.

Cross has wisely redesigned Cabin and expanded the â€œhangoutâ€ possibilities of a Westchester landmark. I was pleased and I think the old regulars will be, too.

In brief
Step back in time in this restored roadhouse. The bar is friendly and the cuisine is reasonable and satisfying. Thereâ€™s something for everyone, from comfort food to modern salads to gourmet pizzas in between.