People are reading
You are at:Home»Food Links We Love»Deven Black Reports from an Eating Adventure with Jim Leff, Co-Founder of Chowhound.com

We’re lucky to have palate experience of one Deven Black â€” not to mention his wife, Jill Rovitzky Black â€” among the freelance writers at the Journal News. He’s been eating and writing about it for more than 2 decades, and was an editor at chowhound.com for many years. We’re especially lucky to have this fun report from the field. Today, Deven went on the hunt for some true chow in Rockland, and Jim Leff, co-founder of Chowhound, was the distinguished guest. (True, I’ve never met him. Maybe distinguished is not the right word.) They hit Reneâ€™s in Spring Valley, La Parrilla BBQ in Spring Valley and Don Sabino Mexican Restaurant in New City. 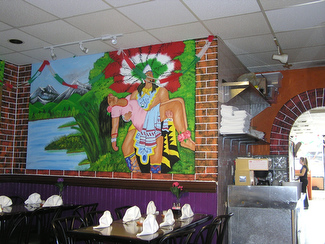 After the jump, Deven’s report.

Going eating with Jim Leff, trombone player and co-founder of Chowhound.com, can be delicious, frustrating, exhausting, exhilarating and educational. Almost every time Iâ€™ve done it â€“ and Iâ€™ve done it many times in the almost twenty years Iâ€™ve known him â€“ I ended up so stuffed I can barely waddle inside from the driveway of my home. That was not the problem this time.

We set out with a goal: we wanted to visit a couple of restaurants we had scoped out while we were visiting other places on an earlier jaunt around the county. We were also open to serendipity, the unexpected find. You have to be when youâ€™re eating with Jim. He has chow instinct that picks up on incredibly subtle clues that tell Jim that this pizza shop is more worth stopping at than any other weâ€™ve passed.

We started off sticking to our plan, serendipity struck later.

On our last joint venture we discovered that CJâ€™s Jerk House in Spring Valley had been replaced with another, less bare-bones Jamaican restaurant called Reneâ€™s. Today when we went to check it out we also discovered that the name and dÃ©cor were not all that had changed. The friendly welcome at CJâ€™s had been replaced by a cold, almost hostile reception at Reneâ€™s. Based solely on that greeting we decided to move on without eating.

Our next stop was La Parrilla BBQ in Spring Valley, in the same strip mall as Vietnam Restaurant. When we stuck our heads in a couple of weeks ago, we agreed that it smelled promising, but we were already full. When we arrived today, our well-trained noses immediately noticed the mouth-watering aromas of grilled meat werenâ€™t there. Neither was the meat. Jim speaks fluent Spanish, so he got it the first time the waitress explained that the delivery truck had not arrived yet and there was no meat available for a late lunch. Come back tomorrow, she suggested.

The third place on our list was Don Sabino Mexican Restaurant in New City. Iâ€™d been there before, Jim hadnâ€™t. Last time I was there, they were out of everything I ordered. Jim had never been there. We looked at the lunch menu and were only inspired by the soft tacos and the torta Milanesa. â€œAlways order a torta Milanesa,â€ says Jim.

Don Sabinoâ€™s menu lists about six or seven taco toppings including lengua (tongue) cecina (aged beef) and the rarely-seen-in-Rockland cabeza (beef head). Those were the tacos we wanted.

â€œOh, so sorry,â€ said our chirpy waitress in Spanish, before switching to English, apparently for my benefit. â€œWe donâ€™t have those.â€

We settled for carne enchilada (spicy beef) and carnitas (roasted and braised pork) and a torta Milanesa. 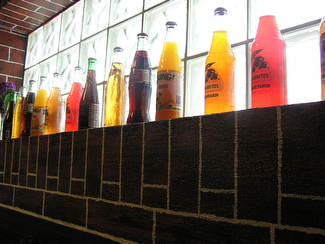 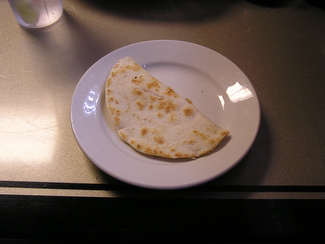 We each took one bite and put it to the side. The cheese was wrong, a mixture of American and something else that dripped water when we picked the quesadilla up. Jim looked at me across the table. I knew that look. It said, â€œI wonâ€™t hate you for taking me here but it will affect your credibility in the future.â€ I needed redemption. The tacos delivered it. 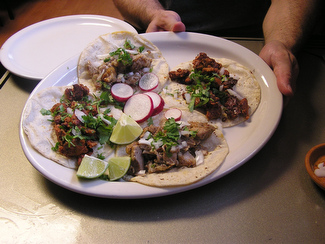 The carnitas (front and back in the picture) was moist and rich tasting, and the carne enchilada was spicy and cooked to just the right degree of chewiness, enough to give your teeth something to do while your tongue celebrates. Top the tacos off with salsa verde (green sauce, you have to ask for it) for more complexity of flavor. 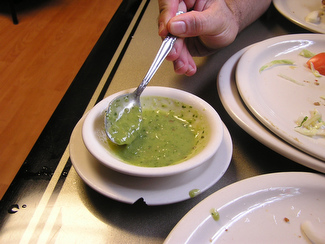 The torta Milanesa, essentially a chicken-fried steak sandwich, topped with lettuce, tomato, crema, and jalapenos and served on a thick roll â€”

â€” was good but nothing to write home about. There was no jalapeno flavor that we could detect and the sandwich needed the extra boost they would have given. Stick to the tacos.

This is where serendipity comes in. Jim was in a hurry to get to a salsa dancing class in White Plains, we still wanted to stop at Cable Beverage in Bardonia to check out their extensive selection of craft beers, and Jim needed to drop me off at my home. But when we drove by Rinaldoâ€™s Pizzeria at 80 S. Main St. Jim made a quick left across Rt. 304, pulled into their parking lot and jumped out leaving the door open and me still in my seat. Two minutes later he was back carrying two large plain slices.

â€œItalian owner who seemed angry I wouldnâ€™t take a free soda and a Spanish guy really proud of the pizza he makes. He pounded that dough and pounded it some more. This should be good.â€

It was. The crust was thin and slightly crunchy, the cheese flavorful and not oily or strings. The sauce was good but not great. Another find for Jim, and another place Jill and I will return to for a less rushed and more thorough assessment.