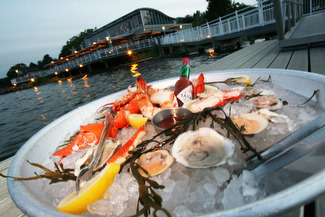 The Blacks weigh in, after the jump.

Deven Black and Jill Rovitzky Black
For The Journal News
It would be easy enough for Hudson Water Club, located at Haverstraw Marina, to coast on its near-idyllic spot: right on the bank of the Hudson, opposite a particularly lush and scenic swath of wooded Westchester hills. You could sit on the deck, gazing at the dramatic view, and have yourself a fine old time even if the food were just a notch or two north of mediocre.

Fortunately, though, the food does a great job of keeping pace with the dramatic setting, making Hudson Water Club a destination dining spot. Go while the weather is still good and enjoy drinks and a meal on the spacious deck; even when the weather fails, you still can enjoy dinner and the same terrific view from the equally airy-feeling, glassed-in dining room, brand new as of midsummer, but boasting chic touches of mid-century moderne style.

Dinner starts with crusty, rustic bread and a little dish of olive oil, decanted with a dramatic flourish from a little pot onto a square white plate. We loved the way the oil looked, a golden pool flecked with red pepper flakes, but found it a bit acrid, possibly the result of too free a hand with the pepper.

As an appetizer, the New England clam chowder, creamy and thick with chunks of potato and lots of tender but substantial clams, was almost too much. A full bowl of this extremely satisfying soup made it tough to soldier on with the rest of the meal. Tuna tartare, with a wasabi-accented dressing and a small mizuna salad, makes a lighter alternative. The bitter, jagged-edged mizuna, Japanâ€™s answer to arugula, was an apt foil for the slight sweetness of the diced raw tuna.

Pan-fried crab cakes were the entrÃ©e of choice when we were at Hudson Water Club; we spotted at least one order on nearly every table. The two substantial mounds really were mostly crabmeat under their crunchy, coppery-brown shells, with just enough breading to hold them together. They were served atop a subtly seasoned chipotle mayonnaise, with a sneaky cumulative effect: You donâ€™t really get the full spicy effect until youâ€™re nearly done. Long, thin fries on the side echoed the texture of the crab cakes â€” crispy outside, soft within. A small ramekin of mixed green and red cabbage slaw, clearly made in house, finished out the plate.

Mushroom ravioli in a truffle-scented cream sauce may sound too autumnal for a summer night, but it was gratifyingly earthy and light enough in texture to suit the weather.

We tried to keep it light for dessert, splitting a cupcake-sized angel food cake topped with intensely flavored berry compote and accented with a sprinkle of oatmeal streusel. That and espresso accompanied the after-dark entertainment, courtesy of Mother Nature: a dramatic display of lightning flashing up and down the opposite bank.

Service was friendly, enthusiastic, knowledgeable and generally attentive. The biggest room for improvement lies on the beverage side. The beer list is a boring assemblage of the usual suspects while the wine list is uninspiring, but among the appealing cocktails we can recommend the blackberry mojito as ideal riverside-sipping material.

Crushed fresh berries mix well with the muddled mint, and the sugar cane swizzle stick is a nice touch for this refreshing but not overly sugary summer drink.

In short, Hudson Water Club beautifully exploits its spectacular riverside site and provides food that is as good as the setting, making it a worthwhile dining option for all seasons.

In brief
Dramatic river views, an appealing menu that highlights seafood but goes beyond, and service both professional and personable make this waterfront restaurant a dining destination. Even when weather shuts down the outdoor tables, the expansive windows on the airy dining room offer the same lagniappe of terrific scenery with your meal.