People are reading
You are at:Home»Restaurants»Next Week’s Restaurant Review: Priya in Suffern 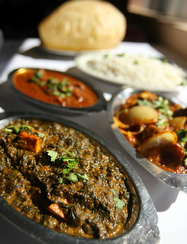 The Blacks find an old friend has stood the test of time in Suffern. What do you think? Add your comments below and we’ll choose a few to publish on Wednesday with the review.

Deven Black and Jill Rovitzky Black
For The Journal News
Like many Indian restaurants, Suffernâ€™s Priya Indian Cuisine has a mix-and-match quality to its menu. Match one of several preparation styles â€” tikka for example, food marinated in yogurt and spices, then baked in a tandoor oven â€” with a choice of vegetable dishes, lamb, chicken, maybe beef and perhaps a shrimp dish or two.

What sets Priya apart, though, is the emphasis on seafood, a reflection of the ownersâ€™ roots in Kerala, on the southwest coast of India. Although the usual land-sourced suspects are there, youâ€™ll find plenty of crab, swordfish, king mackerel and salmon, as well as shrimp.

Priya also features recipes that bear the coastal stamp of neighboring Malabar and Goa. The latter, once colonized by Portugal, is the source of the vindaloo dishes, their heat accented with a lively tartness and mellowed just a bit by Port wine.

We were impressed with the balance and complexity of the lamb vindaloo at Priya, a ballet of Kashmiri chili, cayenne pepper, turmeric and a host of supporting flavors.

The tandoori chicken seemed a little chewy and tough at first bite, but that was just the outside; it was moist and flavorful within.

The sheekh kabob was tantalizingly spiced to bring out the flavor of the ground lamb.

Even better was the chicken dopiaza. The Hindi term â€œdopiazaâ€ means two onions, and this preparation incorporates both the mellow sweetness of long and slow-cooked onions and the sharpness of finely minced fresh onions, each added at different stages of preparation. That two-tone flavor gets a boost from other flavoring elements and the result is a winning combination.

Among the appetizers, the samosas were nearly greaseless, but the filling was disappointingly bland. The two pakoras we sampled â€” cheese and onion â€” were also deftly fried and were much tastier than the potato-filled samosa.
Tandoori shrimp, though, were rubbery, and we detected a slight iodine flavor and aroma.

Like most Indian restaurants, Priya is vegetarian friendly. One noteworthy example: the chena saag, a saucy combination of fresh spinach and chick peas.

It seems to be standard practice these days at Indian restaurants that most extras are a la carte, so if you want to electrify your entree with one of the intensely hot, tart and salty pickle condiments, then cool it down with soothing yogurt-based raita, it will cost you a few bucks more.

Priya is hardly unique in this respect, but it feels like ordering a hot dog and being told that mustard is extra.

The budget-minded will understandably omit these extras, or perhaps spring for them only with a large group, when the cost can be amortized. After all, for most Western palates, a little lime pickle goes a long way. But any strategy that eliminates chutney and other condiments unfortunately blunts on the range of flavors that an Indian meal can supply.

In the same vein, we regret that none of the Indian restaurants around here serves a thali. Itâ€™s a sampling platter with lots of little bowls arrayed along the edges of a round tray, Seder-plate style, providing tastes of multiple dishes.

For novices, thalis offer a perfect introduction to Indian food, but they also offer a full and very affordable meal, including those tasty little extras.

Besides the fish-heavy menu, Priya distinguishes itself by truly treating customers like guests, with warm and gracious hospitality.

We found the management and staff not just willing but apparently happy to explain and advise, clearly demonstrating pride in their food.

Suffernâ€™s Priya Indian Cuisine stands among the veteran ethnic restaurants in Rockland County, and weâ€™re happy to report that it has also stood the test of time. True, the dÃ©cor could stand some freshening, but the high-quality food and the gracious hospitality with which it is provided will always be in fashion.

In brief: This veteran among Rocklandâ€™s restaurants offers the standard range of Indian foods, with a heavy emphasis on seafood, reflecting its ownersâ€™ origins on Indianâ€™s southwestern coast. Go there to enjoy hot and tangy vindaloos, the onion two-way preparation known as dopiaza, and a generous amount of warm and gracious service.