People are reading
You are at:Home»Restaurants»First Look»First Taste: Duke Ocean Grill in Tappan

Duke Ocean Grill, formerly a supermarket, is supermammoth. It seats almost 400 people and has a banquet room for 200 more. But somehow — probably because of the sushi bar and its cozy, low-hanging, boat-shaped chandelier — it doesn’t feel cavernous.

Because of the waterfall wall in the grand entryway, the display cases of aging meat and aged wines, and the novelty of a sushi conveyor-belt, Duke is the kind of place that will draw curious diners from around the region. 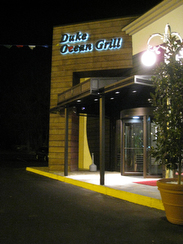 With a five-page menu, it’s also the sort of place where you can take people with disparate tastes and, if you order right, everyone will go home happy, from the steak lover to the sushi fan.

We sat next to the conveyor belt and grabbed this shrimp and seaweed salad as it went motoring by: 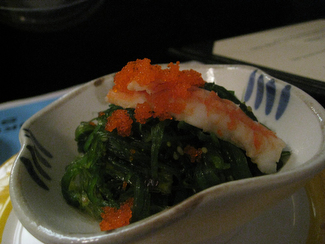 Nice, light start to our meal.

Here is the light above the sushi bar. Bringing the ceiling lower around this area makes the large room feel more cozy. 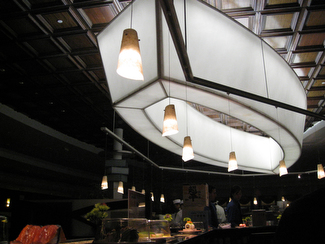 The owners put millions into the renovations, and there are details like this wood pattern on glass all around. 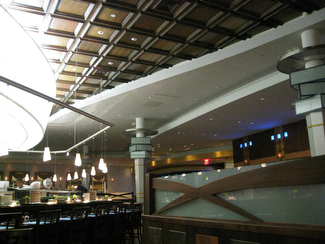 It really is a sight. It is like the Epcot Center of restaurants.

When you’ve got everything from pork chops to pizza on your menu, you’ve got to except curious eaters to order as such. We tried the brick-oven pizza, which comes with smoked chicken, fontina, roasted peppers and cilantro. Except it was parsley: 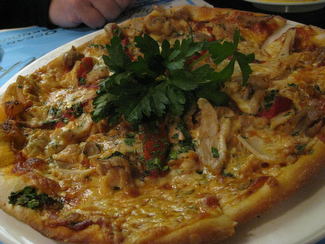 The cheese slid off the crust onto the plate and the chicken was so salty it was inedible: 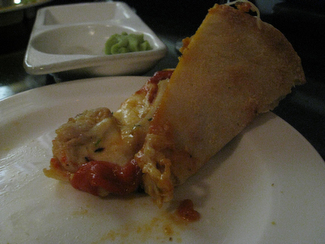 I try to be kind on this blog. But the following dish is just plain bizzare: 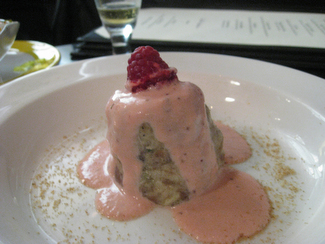 It’s tuna tartare with strawberry sauce. It was filled with tiny pieces of raw onion that crunched in my mouth. Sort of like a too-literal take on beef tartare. The tuna was shredded into tiny pieces with a lot of the sinew still attached, which made it very difficult to chew. And the sauce was so sweet! This definitely falls into the what-on-earth-were-you-thinking category. Doesn’t it look like oatmeal? 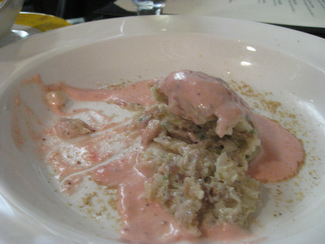 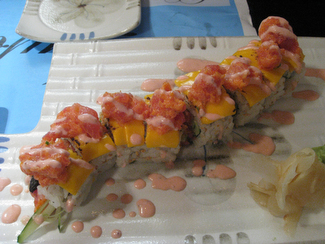 Why, you may ask, would I order such a thing? Because that is my job. If somebody is putting out a sushi roll with slices of Land O Lakes on top, you better believe I’m going to try it for all of you. What if it’s fabulous? (It’s not.) 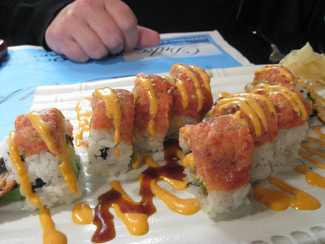 The tuna and the salmon were more my speed: 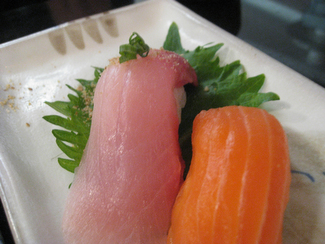 I asked about shichimi, which is used in a crusted salmon dish. The waitress was kind enough to bring it over for me. 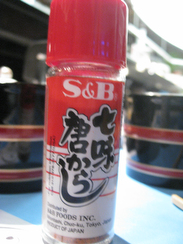 It’s a spice blend of pepper, orange peel, sesame seeds and ginger. It was quite good on the crusted salmon — 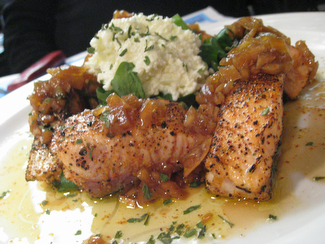 — but the fish came out cold. Also it was served with a side dish of those tiny, chopped-up onions and had the same texture as the tartare. Close, but still needs work.

The mussels were plump and fresh: 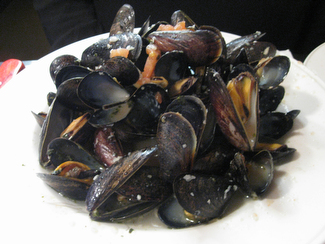 The broth was a little watery. 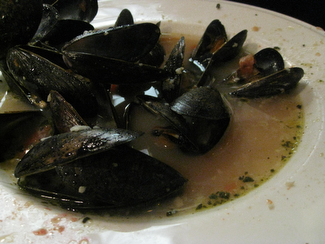 The aged sirloin steak was my very favorite dish of the night. It has a nice crust and was cooked medium rare as requested. The red wine butter was a little unappetizing looking, but it tasted fine. The green beans were al dente and the mashed were smooth and truffle-y. 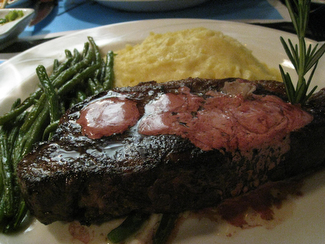 Here are a few more snaps of the interior: 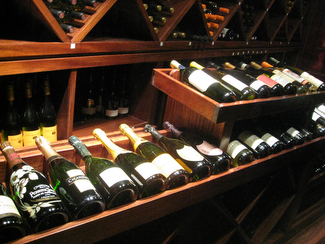 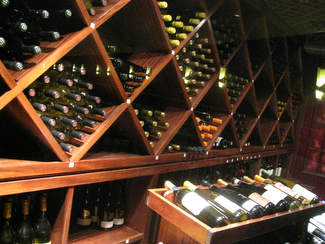 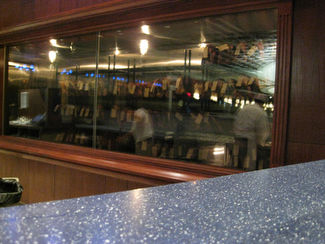 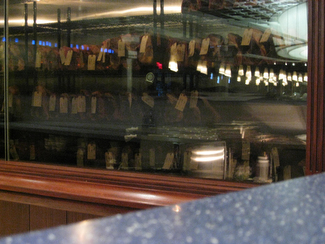 We had dessert, too, and it was delicious. My camera battery died, so I don’t have photos.

This was a very early trip to the restaurant and some of the combinations were a little out there. I except the kitchen will make some changes as they work the kinks out. Service was a little green, but a delight. The ingredients were fresh and good.  So far, stick with the traditional at Duke and you should do just fine. Plus, you’ll be busy marveling at the decor.

Click here for a PDF of Duke’s appetizer menu.

Click her for a PDF of Duke’s sushi and sashimi a la carte menu.

Click here for a PDF of Duke’s special rolls menu.