People are reading
You are at:Home»Restaurants»First Taste: The Farmhouse at Bedford Post

The Farmhouse at Bedford Post — the restaurant owned by the actor Richard Gere and Russell Hernandez of Pound Ridge — opened this month, and in a few short weeks, it’s already earning its place as one of the best restaurants in Westchester. 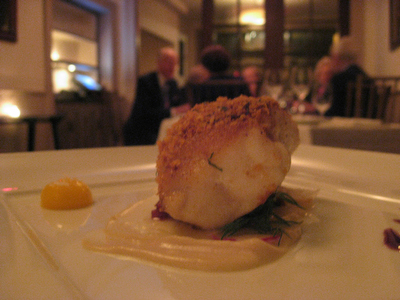 Chef Brian Lewis — a Northern Westchester native who cooked at Oceana in Manhattan and worked in San Francisco and Phoenix — has had a while to work on his menu. The Barn at Bedford Post — the Bedford Post Inn’s cafe and bakery — has been open for nearly a year, and a couple of the dishes on that menu have made their way over to the main dining room, too.

The building is framed around a 300-year-old oak tree, which is uplit dramatically and is visible from the dining room. After valeting your car, you walk alongside the cafe, then under a pergola and past the yoga studio along a bluestone path to the dining room.

You’re greeted by the host in the foyer, and you could walk through to the bar, except it’s not yet finished. There are no stools; just a couple tables by the fireplace.

The dining room itself has a farmhouse feel, but one that’s modern and eclectic. Soft beige walls and fieldstone fireplaces keep company with a contemporary glass-topped sideboard and chairs with spindle backs and cane seats. It was very dark so you’ll please excuse the quality of the photos here: 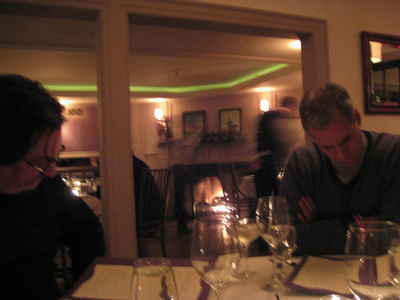 The cocktail menu is among the most creative I’ve seen in Westchester. This pear drink was made with gin, fresh pear nectar and pastis. It wasn’t too sweet, too thick or too licoric-y; but perfectly balanced and a lovely starter to the evening. 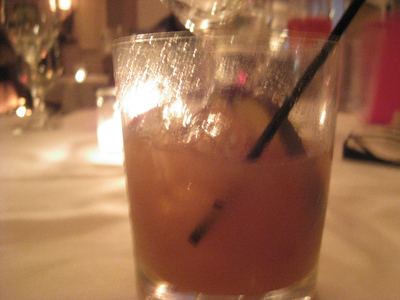 My one complaint: the sticker was still on the fruit. For a chef who touts the heritage of the ingredients on the menu, that was disappointing. We tried a riff on a Manhattan and a Bellini, too, and both were terrific. Our amiable server, Dan, said the staff is working on a drink called the Woodsman that has so much juniper it tastes like pine. It sounded great.

We started with an amuse bouche of cauliflower puree that was drizzled with almond oil. 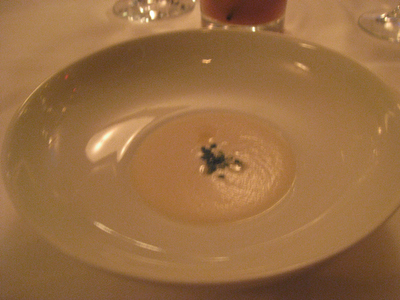 Earthy and smooth as silk.

The menu is quite short and with four at our table we were able to work our way through most of it. 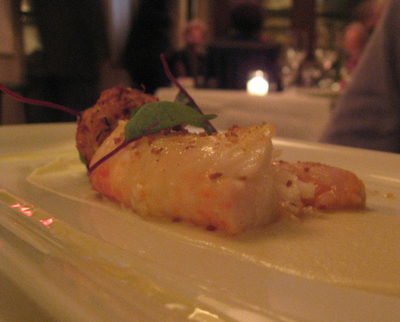 Sweet crab with hints of vanilla. The crabcake on the side was crunchy and full of crab. 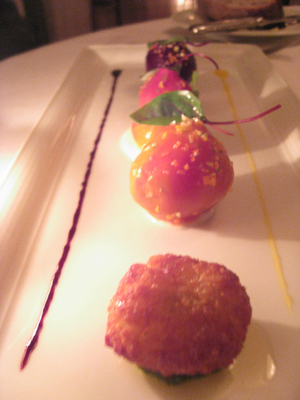 My husband finished the croquette before I could get a taste but he said it was so delicate it fell apart if you looked at it too hard. The beets were perfectly cooked and a delight in my mouth. 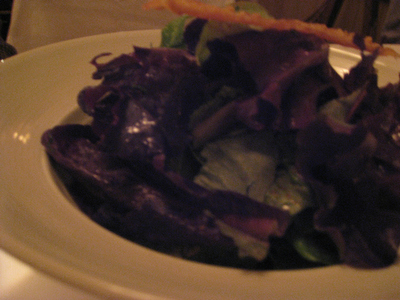 You can tell these were happy lettuces. The liked the cold. And they were so daintily dressed yet so packed with flavor. Little flakes of salt melted on your tongue. 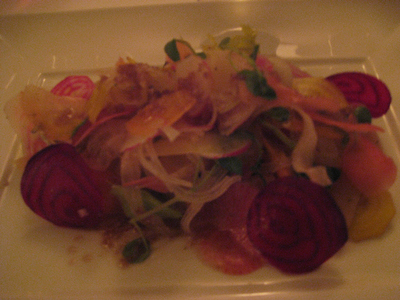 Y’all know the book, right? What a clever name for a dish. This was unbelieveable. Fennel, beets, carrots and other root vegetables. Sharp and bitter with the first few bites, then as your fork brought the goat cheese, dates and dressing up from the bottom of the plate to mix with the vegetables, the dish becamed tempered with fresh, grassy, sweet notes. Loved this dish.

The pastas had something in common with the lettuce dish: they were delicate but full of robust flavors. 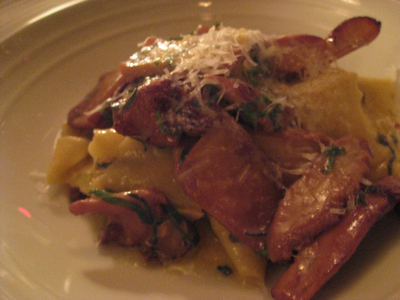 All that you want out of a long-noodled pasta: the sauce was slippery, the mushrooms were meaty and the cheese was rich. 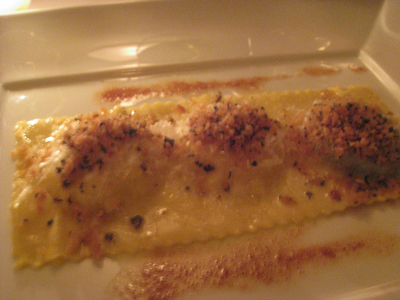 This dish is now in my pantheon. On the left is a raviolo with ricotta. On the right is a raviolo with spinach. In the center is a raviolo with a soft-cooked egg. Yes, it runs when you cut the pasta. Mix them all together and you have one amazing combination of flavors and textures. The crunch of the breadcrumbs and the perfume of the sage are the icing on the cake. 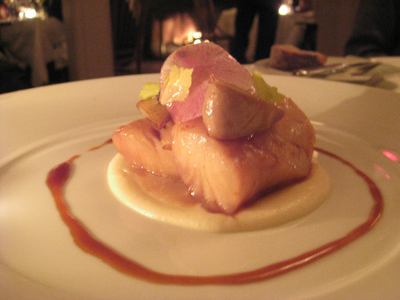 Fresh, buttery and flaky. The radish brought some zing. 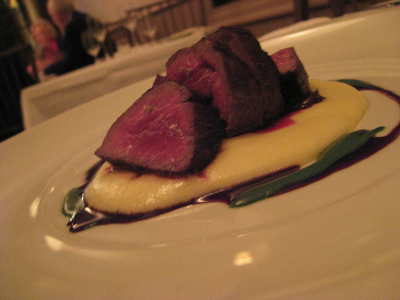 This was the best entree of the night. I normally don’t order tenderloin; I don’t think it has much flavor. Boy was I wrong on this one. The outside was crusted with chunks of salt and herbs and was crispy and dark but not charred. The inside was gorgeous: buttery and beefy. The potato was so utterly rich; it was made by folding a fondue-type melt of robiola into the cleanest puree of potato. And the reduction was incredible too. Four stars. 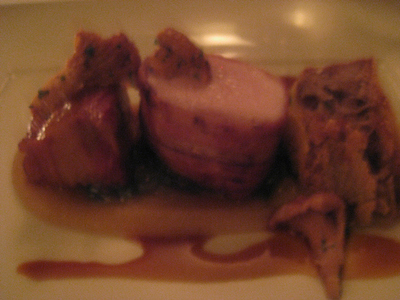 So sorry for the blur. And I toppled the terrine on the right before taking a picture. My apologies. So from left to right we have the belly, which was braised in agave nectar; the tenderloin, wrapped in pancetta; and the terrine, which was covered in corn nuts and deep fried. This should have been my favorite dish. I mean throw an egg on there and you have all my favorite things in the world. Unfortunately, the terrine was stringy and hard to eat and the tenderloin was dry, even though it was wrapped in pancetta (which was hard to cut through). The belly was unctuous and fatty. Very good. I just hoped for more from this dish, especially knowning that it comes from John Boy’s farm.

If you went to an ordinary restaurant and ordered the Cabbage Hill lettuces and this monkfish, you’d walk away stunned. But the wow factor of the other dishes here brought a bit of a “what else?” feeling to this dish. It was perfectly good, just upstaged by its friends. The egg, though, was a fascinating blend of white and yolk set into a texture that was somehow a combination of both, but better. See it on the left, about 11 o’clock? Fantastic.

Desserts suffered the same fate. They were very tasty, but simple. I found this quite acceptable; I was ready for my taste buds to settle down. But some people might want more from chocolate. 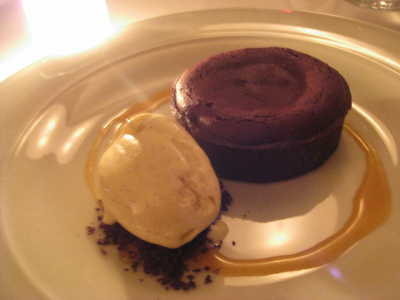 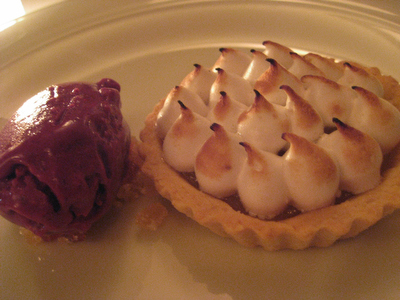 The gelato was fabulous.

We ended with mignardises: a rich truffle and an etheral coconut ball: 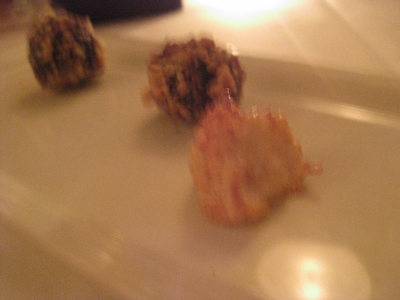 Couple notes about the experience. Our waiter was very knowledgable, superfriendly and eager to please. He talked just as much as we wanted him to, and no more. 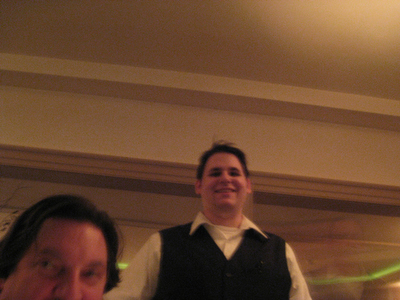 He asked “are you a blogger?” because of the camera and I had to admit I was. He posed for me.

But there were a few green moments. We waited an awfully long time for drinks and the check, yet pastas came almost as our appetizers were being cleared. Maybe the kitchen’s fault; maybe the servers. We wanted red wine with our pastas and – even though we’d already ordered it and it had been opened — we had to wait until we were almost finished with the dishes before it was poured. Speaking of wine, the wine list doesn’t have many inexpensive options. It was hard for me to find anything under $60.

And there were a few other rough-around-the-edges things: tiny quibbles that only a very experienced diner would take issue with: wine bottles touching the rim of the glass when poured (and little spills here and there); the valet not taking the claim check off the windshield or closing the door behind you. Really really nitpicky things that normally I wouldn’t bother mentioning — except that you can tell this restaurant is going for the gold.

And it’s nearly there. The Farmhouse at Bedford Post has only been open a few short weeks and it is almost running on all cylinders. Opening the property piecemeal has paid off for Gere and Hernandez — and for Lewis. It’s given everybody time to get comfortable making delicious, creative food. The restaurant is on my short list of destination restaurants and is worth the drive from just about anywhere.

PDFs of the menus:

The 411 on the Barn at Bedford Post (I’ll put up the link for the Farmhouse in a couple hours.)