People are reading
You are at:Home»Food Links We Love»Bobby Flay at Stew Leonard’s Today

So I stopped by Stew’s this morning to check out Bobby Flay shooting “The Art of the Sandwich.” He shot 10 webisodes to air over the summer on Yahoo’s food site. 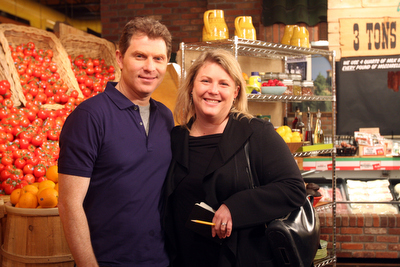 More photos — and one of the sandwiches — after the jump.

So the premise is that once a week from Labor Day to Memorial Day, Yahoo will show a 3-minute (or so) video on how to make a great sandwich. The show is sponsored by Hellman’s, so you can imagine mayonniase is involved. (Funny story about that afterward.)

Yesterday they made five sandiwches, including a philly cheese steak-style one, a muffaletta style (which used mayo in the olive sauce), a fried egg and ham sandwich (yum) and a shrimp roll with cilantro.

When I stopped by this morning around 11, he was preparing an egg salad sandwich with a flavored mayonniase (Hellman’s light; Dijonnaise; white vinegar and smoked paprika). 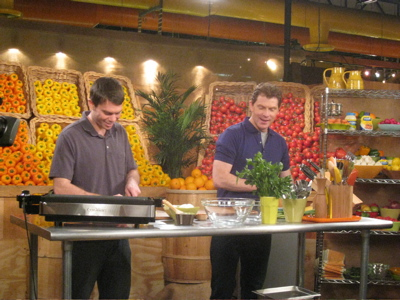 They picked a random guy from the audience to help Bobby. 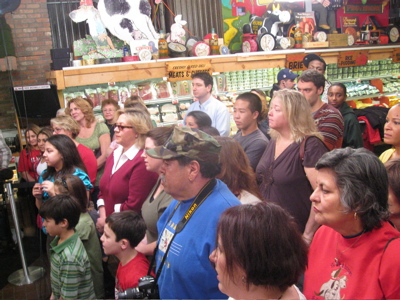 See the girl in the blue shirt? That’s Sydney Harris of Yonkers. She’s an 11-year-old who adores the Food Network and Throwdown in particular. 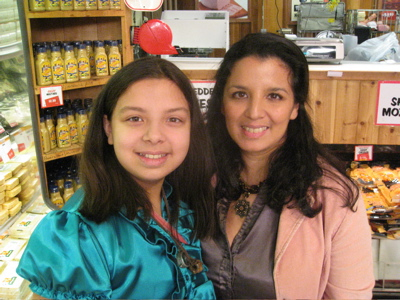 That’s her with her mom, Renee Guerrero.

She told Bobby and the crew about her recipe for deviled eggs: mayo, salt, parsley in the yolks and stuff back into the whites. Sounds pretty good!

So Bobby and random guy cooked for a bit more — 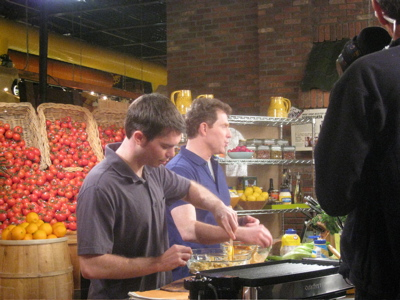 — and then they handed out samples to the crowd: 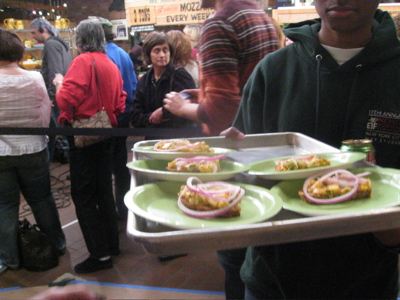 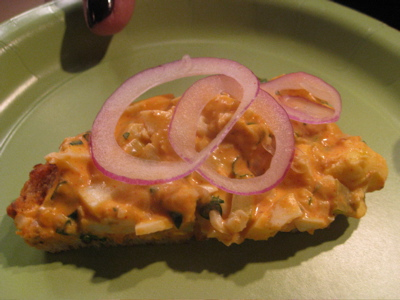 Afterward, I asked Bobby what he thinks goes into making a great sandwich. He said you have to think about each component individually; pick the right bread; decide how you’re going to treat that bread (toast? grill?) and make sure there’s a moisture component for your bread. (That’s where the mayonnaise comes in, I guess. And then, of course, you’ve got to have great ingredients to go inside. 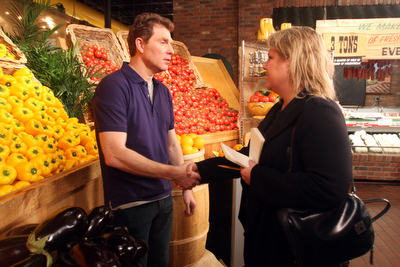 (That photo by Carucha, too. Thanks Ru!)

Oh, and about that funny story:

My brother-in-law works in film. Whenever he’s on location, a crowd always gathers, looking for Leo DiCaprio or some such. Inevitably, someone asks: “What’s going on?”

He always tells them, in his dry wit: “Mayonnaise commercial.”

People usually shrug their shoulders and walk away after that, which is, of course, what he’s hoping for.

Thing was, there was this one time when a woman shrieked: “I love Hellman’s!”

So you can imagine how I laughed when today I actually was at a mayonnaise commercial. And it was for Hellman’s.