Good morning and happy Monday. The snow surprised me this weekend; I guess I’ve been too busy watching the first four seasons of Lost to pay much attention to what’s going on outside! I can’t believe I’ve been missing it all these years. What fun.

A lot of cooking this Saturday. We started with this cocktail, from Food & Wine’s Cocktails 2008 book, called the Rose Marie: 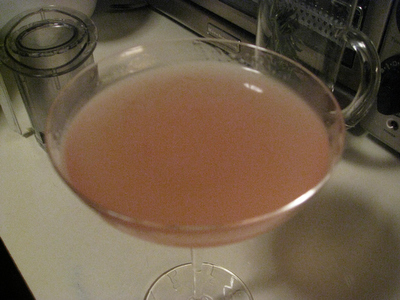 Created by chef Drew Brown at Piedmont in Durham, N.C., it’s made with rosemary and grapefruit. Make a simple syrup (1:1) and steep a 4-inch rosemary sprig in it. Strain. Then make the drink:

Rose Marie
Ice
2 ounces gin
1 ounce fresh grapefruit juice (I get my ruby reds mail order from Red Cooper in the Rio Grande valley. Man are they amazing.)
1/4 ounce Rosemary Syrup (the original calls for 1/2 but I think it’s too much)
1 rosemary sprig
Fill a cocktail shaker with ice. Add the gin, grapefruit juice and rosemary syrup. Shake well. Strain into a chilled martini glass and garnish with the rosemary sprig.

I liked it quite a bit; my husband found the rosemary competed too much with the juniper of the gin.

We had Welsh Rarebit fondue (fondue recipe here) with our cocktails by the fire. 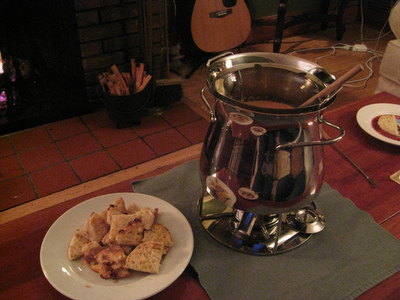 For supper, we had a bowl of black bean chili with pork, and skillet cornbread. And (over the end of Lost, Season 2), we enjoyed our baba au rhum for dessert. 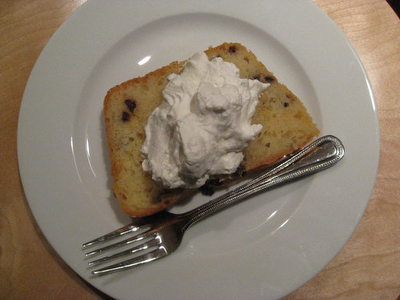 (Full disclosure: this is another baba that my friend made over New Year’s weekend. but it was so delicious we had to recreate it. We used Ina Garten’s recipe and it is amazingly good: boozy without being harsh. I adore it.)

A great winter meal, if you don’t mind me saying so!

With that, here’s what people have been talking about.

Alice weighs in on the Tarry Lodge. She seems to be pretty even keel about the whole thing. (NYT)
A truly ridiculous Chowhound discussion about said review. (CH)
James goes off-line, and says thanks to everyone who’s helped him along the way (including me. Thanks!) (A Man Has To Eat)
Dara has set out some great winter meals in her Menu Plan Mondays this week, including crock pot goulash and mulligatawny soup. (Chick in the Kitchen)
Doug really likes Half Moon in Dobbs Ferry, even though his pictures came out dark. (HT)
Classic Italian restaurants in Yonkers. (CH)