People are reading
You are at:Home»Recipes»Recipes: Welsh Rarebit Fondue

I suppose Welsh Rarebit is sort of a fondue even if you don’t serve it in a fondue pot. But I had a hankering for fondue this weekend, and found this recipe in the new “Great Party Fondues” book by Peggy Fallon. 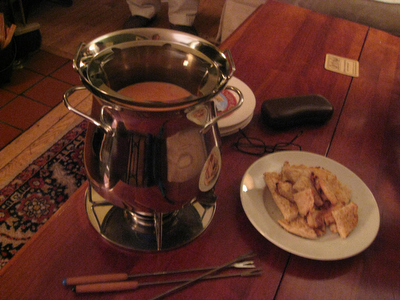 None of us could stop eating it. Delicious. The recipe, after the jump.

Welsh Rarebit Fondue
I ran out of Worcestershire, so I substituted soy sauce. I also used about half the recommended amount of tomatoes; the whole can seemed like too much. Also, Peggy recommends cooking the bacon in the microwave. Not my bag, but if it’s easier for you, go ahead.

Cook the bacon until crispy and dice into pieces.
In a large bowl, toss the cheddar with the cornstarch and powdered mustard to coat.
In a medium saucepan, melt the butter in the beer over medium heat. Bring to a boil, reduce the heat to low, and gradually stir in the cheese mixture, letting each addition melt before adding more. Stir in the diced tomatoes, bacon, Worcestershire and cayenne. Cook for one minute longer, or until heated through.
Transfer to a fondue pot and serve at once.
“Great Party Fondues” (Wiley) by Peggy Fallon