People are reading
You are at:Home»Food Links We Love»Finally, I get to check out the Tarry Lodge. Now when can I go back?

The following guest blog is written by Diana Costello, a staff writer at The Journal News/LoHud.com.

First of all, a big hello to all the Small Bites readers and an even bigger thank you to Liz for letting me post on her scrumptious blog! Sorry I got a bit wordy here, but I just couldn’t help myself. Writing about food is too much fun!

OK, so I’ve been wanting to check out the Tarry Lodge ever since Liz first wrote about it. I swear I took one look at that menu and my mouth instantly started watering (as it is now, even just thinking about it) because it all sounded way too tasty. Add to that the fact that this is a Mario Batali and Joe Bastianich joint, and I absolutely NEEDED to go. Like, immediately. (I’m not shy about admitting I’m a Molto Mario fan.) 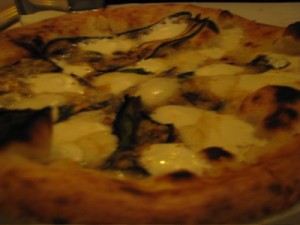 But I’m broke… So eating out lately has taken a back seat to buying groceries.

My big chance to check it out came last week when my friend — who is a total foodie — told me she would be in town from San Francisco and wanted to get together for dinner. As I was considering our options, I thought about the Tarry Lodge and that was it. This was where we were going. If we could get a reservation…

Upon Liz’s recommendation, I checked out OpenTable.com and luckily there was one table for two available at 8:30 p.m. Done. Booked. We were going and I was stoked.

We arrived hungry (as we always do!) and started to plan out our menu. Should we just order a bunch of pizzas? That was a thought, but in the end we created a more rounded offering and I’m absolutely beyond happy that we did.

For starters, we went with two dishes: the Marinated Calamari and the Fennel with Blood Oranges. We paired these with a glass of Captain Lawrence Double IPA. 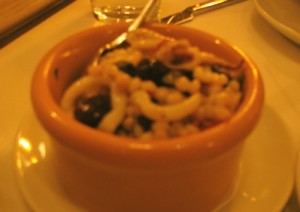 The calamari were just right, tender and thinly sliced. They were served in a mixture of Israeli couscous, which I absolutely adore for the way it feels on my tongue, and two of my favorite things in the world: capers and really rich olives. (I think the olives were calamata, but I can’t say with absolute certainty. In trying to imagine the flavor of the dish, imagine a really concentrated calamata and you’ll get the point.) Despite the flavor power of these ingredients, they all blended together quite subtly, leaving you to search for each one individually. Just delicious.

Along with the fennel salad, it made for a great pairing. The light licorice flavor of the fennel was refreshing and nicely balanced by the sweet flavor of small blood-orange slices and what I believe were some heavily caramelized red onions. It was all marinating in a light vinaigrette of olive oil and the dish’s natural juices. (Sorry, the photo of the salad just is unusable. Big props to Liz for taking such great food shots! It’s NOT easy!)

Suffice it to say that I was already on cloud nine, but we still had some treats in store!

Up next was the pizza. We went with the Quattro Formaggi with Grilled Eggplant, and paired it with a red wine. (Sorry, I forget which one. My friend picked it.) 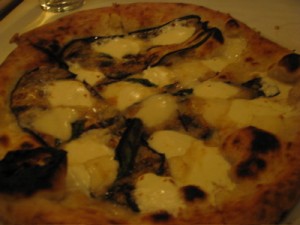 Having read in the book “Heat” about how Mario had worked so hard to perfect his pizza dough, I was very excited about this course. I consider myself to be a bit of a pizza aficionado (or some might say geek…) and so I was ready to critique.

The pizza is very much in the Naples style, with thin and yet bouncy crust. It’s kind of like Luzzo’s, if you’ve ever had that pie on 1st Avenue and 12th Street in New York. If it were an absolutely perfect pie, however, the dough would have been a touch thinner and a touch bouncier. And the toppings would have extended a little closer to the edge of the pie. But really, I haven’t had better pizza in Westchester, so don’t take away the wrong message here. Speaking of the crust, it had a nice char on the bottom, though I personally wouldn’t have objected to charring it just a bit more. That’s just my preference.

The toppings were great. I loved the mixture of the cheeses: mozzarella, aged goat cheese, ricotta and Parmesan. It seemed as though the Parmesan went down first, permeating the dough with that beautiful salty flavor that I just can’t get enough of. Some shaved Parmesan over the top would have been over the top, if you know what I’m sayin’! As for the eggplant, it was simply rustic; grilled and left as is. It worked perfectly. Along with a touch of fresh basil, it added a nice earthy flavor to the pie.

And then…. our main event…. PASTA!

Let me preface what I’m about to say by saying quite frankly that I LIVE for pasta. I cannot go too long without it, otherwise I crave it like a fiend. It’s an addiction. I admit it. But I guess that’s what you get when you grow up in an Italian family, right?

So when I tell you that I could eat the pasta we had at Tarry Lodge every night (if I had the budget and a better metabolism) please know I am not exaggerating. I enjoyed it that much. (Though I’m sure you could take your pick of the pastas on the menu and feel the same way!) 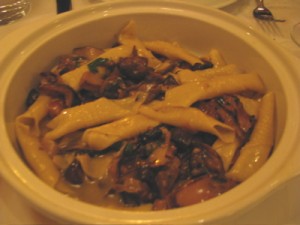 We chose the Garganelli with Funghi Trifolati. The dish was served in a nice white pot with a lid on the top, which when the waiter lifted, the smell of garlic instantly smacked us in the face. That’s a good start in my book. The pasta — which of course was homemade — was a bit larger than penne, and cooked to the tooth, so to say, which isn’t always easy with fresh pastas. The cremini, shitaki, and oyster mushrooms were soft and packed with flavor. It all came together in a browned butter sauce. With a touch of parsley and heaps of freshly grated Parmesan on top, I couldn’t get enough, even though by this point I was nicely stuffed. (For all you Parmesan lovers, you’ll be happy to know that the waiters leave you a little bowl of freshly grated Parmesan so you don’t have to be shy with your sprinkling. I love that. And I took full advantage.) 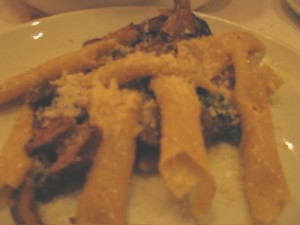 So now we were quite happily stuffed and buzzed, my favorite combination. Time for the check. But don’t worry, there’s no need to sneak out to the bathroom in hopes that your friend will pick up the monstrous tab. 😉 It was perfectly reasonable: about $35 each.

Obviously I was happy with the food at Tarry Lodge. But the experience was enriched by the lively atmosphere and friendly staff (who really only slipped up once, when my friend and I went to split the check on two credit cards and they accidentally charged one card twice and the other card not at all). Even by 10:30 p.m. on a Wednesday, there were still people comfortably eating at the tables and sipping drinks at the bar.

Suffice it to say I’m already dreaming (yes, literally, I’ve had dreams about this meal) of going back…