Another winner of a meal at Woody’s for Hudson Valley Restaurant Week. Bold flavors, big portions.

More than 80 restaurants throughout the Hudson Valley are offering $28.09 dinners and $20.09 lunches through April 3 except Saturday. (Caveat: check the Web site hudsonvalleyrestaurantweek.com to see which restaurants are offering which meals. Not all are offering both.)

Every day through April 3, we’ll be covering a different restaurant here on Small Bites.

Woody’s — like Tavern last night — has lots of choices and generous portions. We started with an iceberg wedge. Great temperature (don’t you hate when salads are cold?), nice tasty cheese, proper amount of dressing and crispy delicious bacon. 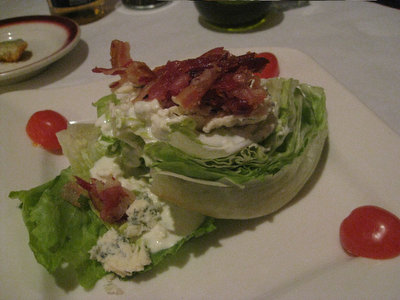 There were four tables in the room, including ours. I dropped the ball a little bit tonight — the batteries died on both my video and still camera, and I forgot to Twitter until after I got home. Sorry folks. I’m doing the best I can here! 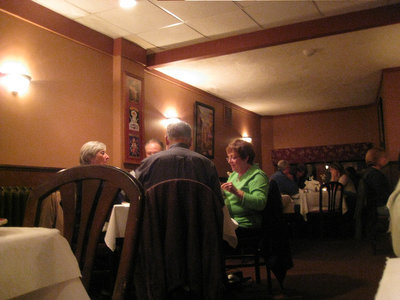 This garlicky spread on a toast arrived at the table — 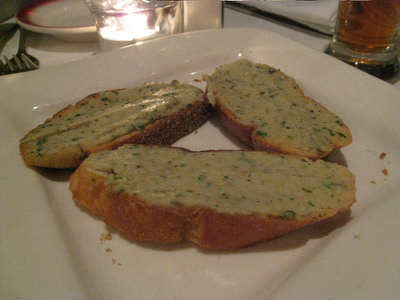 — and then I went off to talk to my fellow diners.

Dave Gannon and Laura Gannon (and their very shy daughter) came down from Monroe: 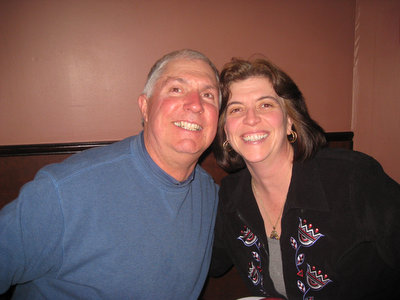 Dave so loved his mussels that — he was a little sheepish to admit — he took the leftover tomato sauce home. He says he wouldn’t have done it on his own, but the waitress suggested it. He’s going to use it on pasta tomorrow! He also had the steak and adored it.

Laura had the crab-artichoke gratin and the gnocchi, which she also adored.

“We’ll defintely be back,” she said. They’re also heading to Restaurant X & Bully Boy Bar and a restaurant in Orange County for HVRW.

Speaking of the crab and artichoke gratin, that was also on our list. 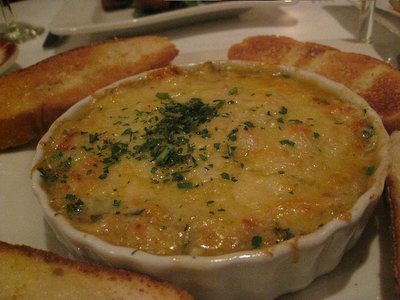 I loved the big chunks of crab and the consistency was nice. I wasn’t a huge fan of the chopped peppers that were inside. It was nice on toast though!

My grandmother got the crispy pork and scallion spring rolls with soy-ginger dipping sauce: 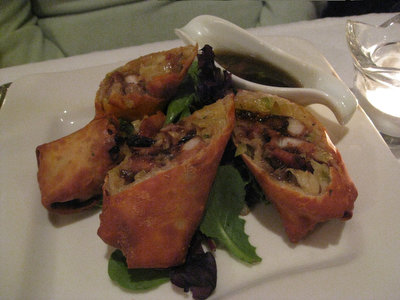 Huge portion. Meaty. Cabbage inside, too. Very tasty — the spring roll itself a little thick. But that’s quibbling.

Allan and Holly Freedman of Piermont: 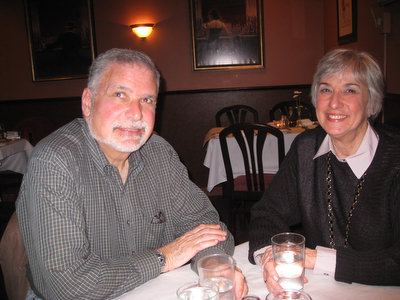 Alan had the French onion soup and the gnocchi with duck ragu. “Delicious. Tangy. Just right.”
Holly had the iceberg wedge and the salmon with tomato, saffron and shellfish broth. She said it was “excellent — really made very well.”

Their friends George and Rita Cardone, who lived for many years in Upper Nyack but now live in Maryland: 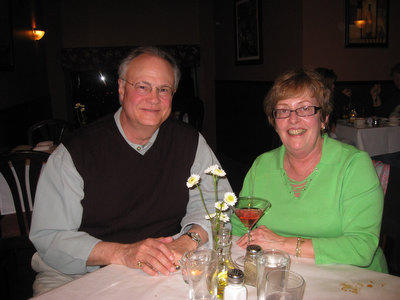 They both had the gnocchi, which they proclaimed “excellent. A lot of flavor and very light.”

And Rita had the mussels, which she said were “very nice — flavorful and the sauce was nicely done too.”

My husband’s hanger steak with mashed: 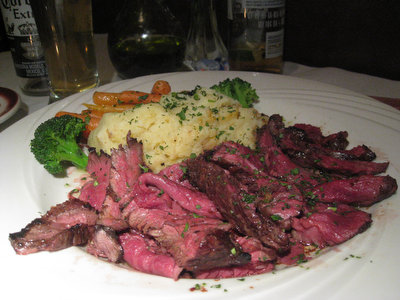 My chicken fontina with spinach, proscuitto and Madiera. 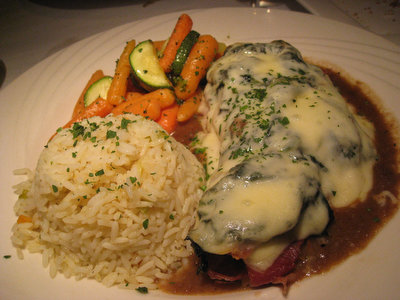 The chicken was juicy and all the components were good… a little salty for me, though.

The winner of the evening was, in my opinion, my grandmother’s dish. The Hungarian Goulash: 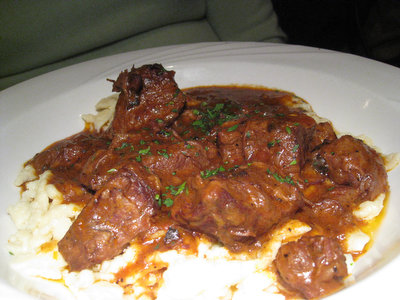 Chef Debbie uses her Grandfather’s recipe — and he was born in Budapest. She imports hot and sweet Hungarian paprika and makes her own special mixture. The spatzle is homemade and the beef is meltingly tender.

I was off working and my grandmother and my husband tore into their desserts, leaving only mine pretty enough to photograph. Pear and gingerbread pudding: 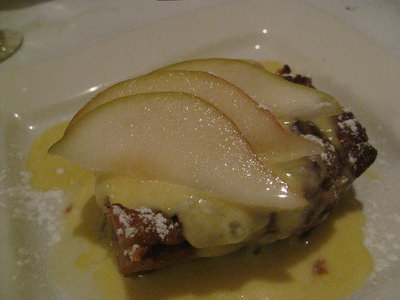 Sauced with a creme anglais.

My husband did, however, shoot this photo of me interviewing Holly and Alan: 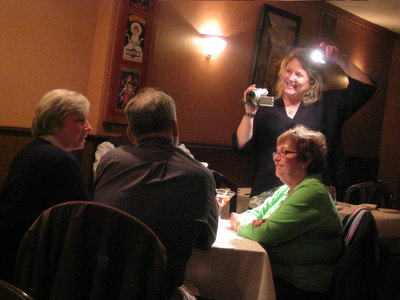 A lot of people are heading for the big-ticket restaurant this week, and I understand getting a great deal at some place that’s expensive. But don’t forget your neighborhood places like Woody’s. Say you’ve been wondering about it but have never taken the time to try it out? Or maybe it’s a place where you normally just get a burger? Restaurant Week gives you the chance to be adventurous without putting a lot of the line.

I know I’ll be back to Woody’s! 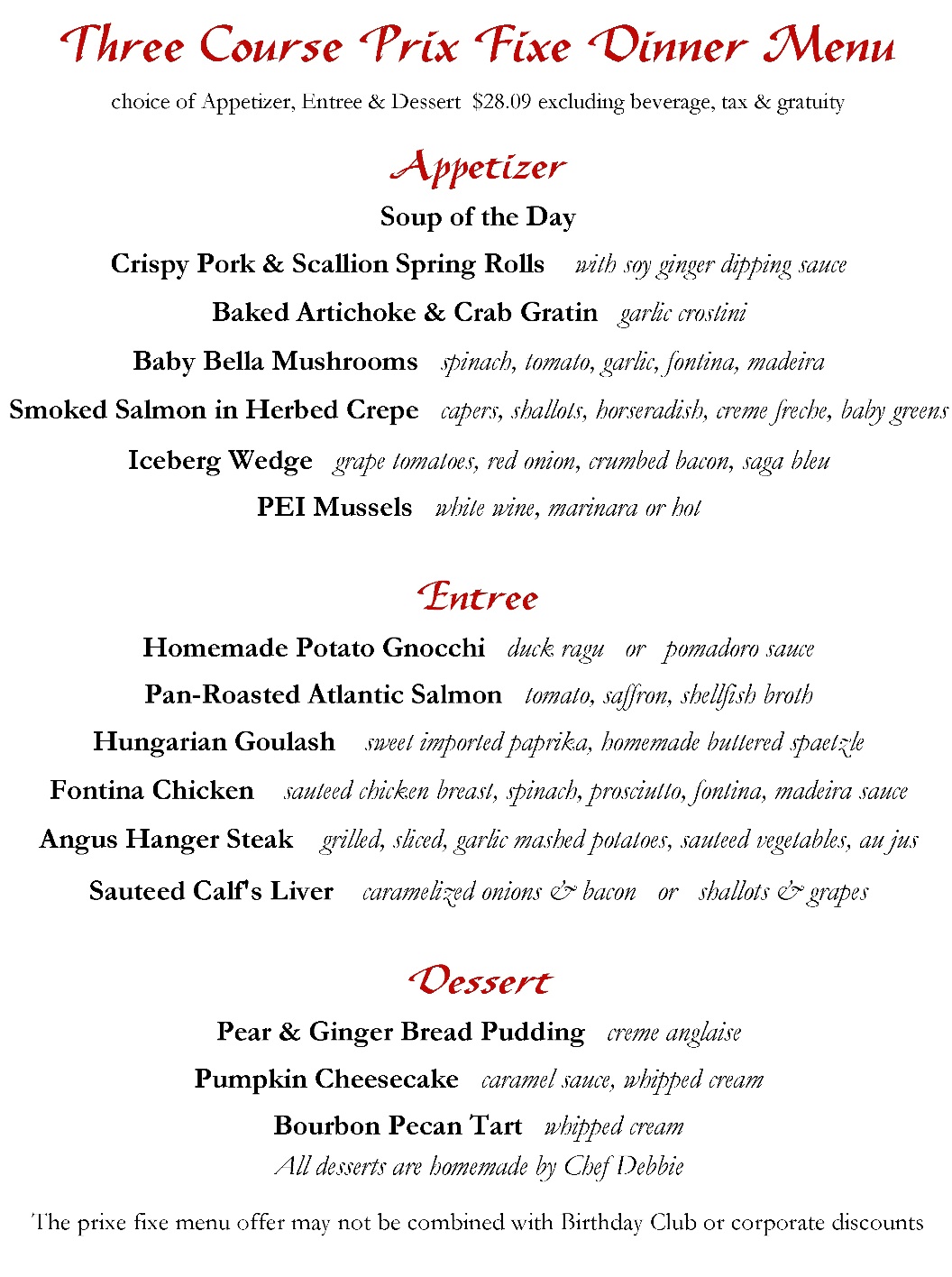