People are reading
You are at:Home»Food Links We Love»First Taste: Sweet Grass Grill

I stopped by the new Sweet Grass Grill in Tarrytown last night and shared a few things with a couple of friends. By no means is this a full review, just a sampling, but I have to say I was impressed. My favorite dish was the chicken: 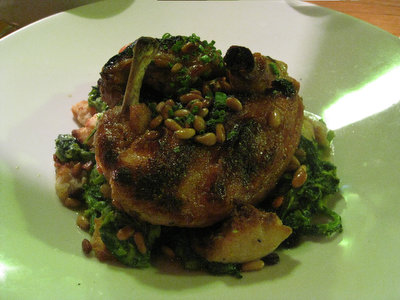 Crisp skin. Juicy meat. The broccoli rabe was cooked with a lot of attention — it wasn’t stringy like it can be sometimes. The pine nuts gave the dish a nice texture contrast, too. 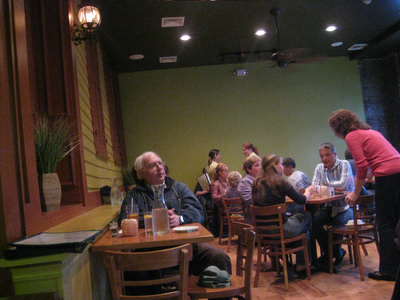 The restaurant is done in tones of green. Like the grass, I suppose. The dining room is spare. The one wall looks like the outside of a house. There are varnished wood tables and chairs. Wood floors. Green walls. Except the wall by the bar. That’s brick: 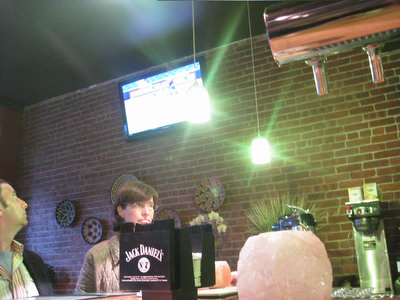 (The baskets hanging on the wall are made of sweetgrass. They’re made in Rwanda and buying them supports the women who weave them.)

The chef, Tommy Lasely, formerly cooked at Blue Hill at Stone Barns, where he was a was a vegetable cook and meat entremetier (that means entre-maker). He graduated from the Culinary Institute of America. He was raised in North Carolina, and worked in restaurants there, too, including as sous chef of Cypress International Cuisine in Asheville. (In my post here I called him Carl, which is his first name. He goes by his middle name.)

The first thing we tried was the pigs in a blanket. 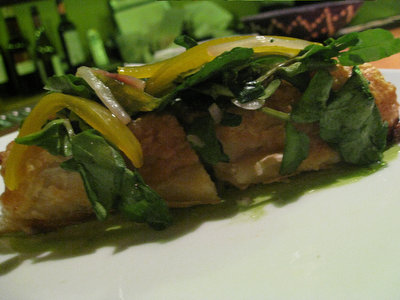 On the menu “Stone Barns pork wrapped in pastry with a tarragon mustard.” The pork was great. The vegetables and herbs were too. The tarragon really came out. The pastry wasn’t what I expected. I guess I didn’t think it was going to be puff pastry…. and so it was a little buttery. I also expected it to be smaller?

One of three sliders: 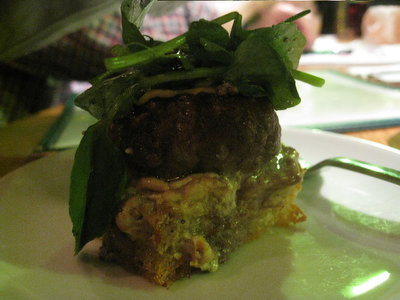 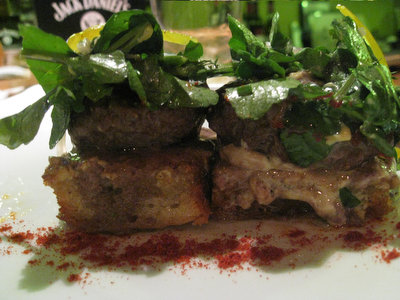 I liked these. The foccacia was crunchy (and buttery and I liked the butter!). I wondered why they didn’t have a top, but I just ate them with a fork and my fingers and didn’t miss the extra bread. The sauce was mustardy. And I found more tarragon flavor. (I called the chef this morning and he thinks this may have come from the fennel seeds in the bread.) The meat was beefy and good.

These were bar none the best sweet potato fries I have ever had. 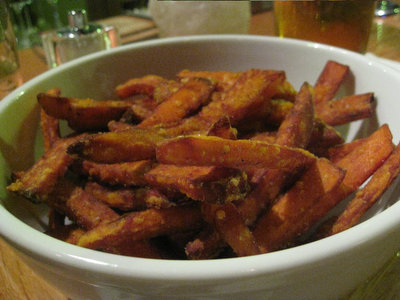 Crispy, salty, sweet and earthy. Just delicious. It’s so hard to get these right. They’re usually limp. These held up all the way through dinner. Completely addictive. Really a winner.

I guess you could call this a “salad.” 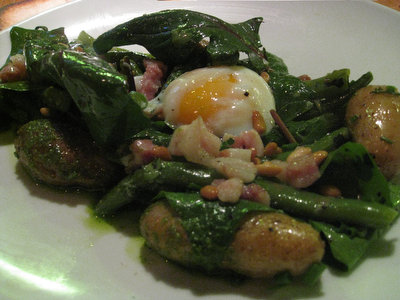 On the menu: “Spinach Salad with a Poached Stone Barns Farm Egg: Homemade pancetta and potatoes.”

The egg was, of course, delicious. The fingerlings were cooked perfectly. The pork was just right. The asparagus didn’t do much for me. The spinach was great — and the red stems were beautiful. (You can just see one peeking out at noon o’clock in the photo.) But don’t think you’re going all weight watchers if you order this “salad.” It’s indulgent. Not that there’s anything wrong with that! The balance was very nice. 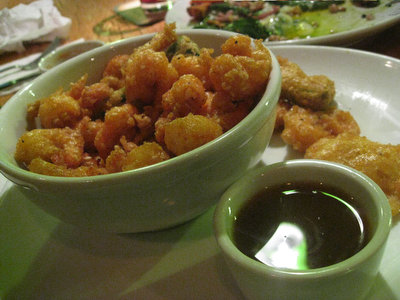 My two friends very much enjoyed this. I was ambivalent. The breading was light, airy and crisp and the shrimp tasted nice. You may very well like as much as they did.

Back to the chicken: 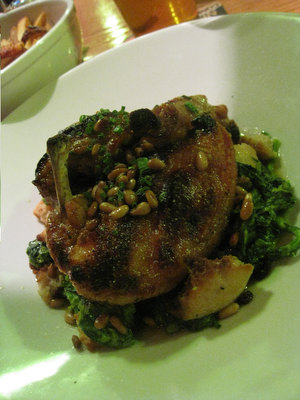 The chicken is really the sort of dish you want from a neighborhood restaurant. Underneath was a “loose stuffing,” as Tommy calls it, made of sourdough bread, sherry vinegar, chicken stock, shallots and chives. It reminded me of dumplings. And what goes better together than chicken and dumplings? It was fun to pull my fork across the bottom of the plate and pick up the stuffing with the rabe.

The restaurant officially opened April 17. It’s only been two weeks. And people have been waiting a long time — more than six months — to check it out, so it’s pretty mobbed. Especially before an event at the Tarrytown Music Hall. The staff was harried between about 7 and 8 o’clock… after that things were running pretty smoothly.

You can absolutely see Dan Barber’s influence in Tommy’s cooking. Some dishes are very similar indeed. (But why would that surprise you? Dan is one of Time’s 100 Most Influential people!)  The compositions are not careful, precise and edited like Dan’s, but I’m not sure they’re meant to be.

This is a bistro-cafe, so the food is laid back. But there are lots of layers and components (herbs, pinenuts, that “stuffing”), and lots of flavor. I guess if I had one small complaint, I’d say that I tasted a tarragon flavor in almost every dish… and wished for a little more variety. But I’ll be back to try more of the menu. And soon.