People are reading
You are at:Home»Food Links We Love»Tony Esnault, formerly of Alain Ducasse, to Guest Chef at La Panetiere in June

Speaking of La Panetiere (I just posted about the new spring and summer menus), a press release just came over announcing that Tony Esnault, who earned three Michelin stars at Alain Ducasse at the Essex House in Manhattan, will be the guest chef at La Panetiere from June 17 to June 20. 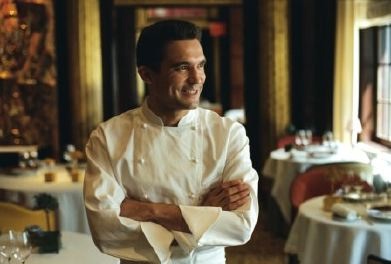 He’ll also be doing a cooking demonstration on bi-colored gazpacho followed by a three-course luncheon on June 17th to June 19th.

The press release, including a bio of Tony, after the jump.

RYE, NY – La Panetière Restaurant announces a special guest-chef week from Wednesday, June 17th to Saturday, June 20th, hosted by celebrity-chef, Tony Esnault. Former Executive Chef for Alain Ducasse, Chef Esnault garnered three stars from Michelin, the industry’s highest achievement, at one of only seven restaurants in the United States who have received this distinction to date. In addition to his guest-chef week menu, Chef Esnault will also lead a cooking demonstration on bi-colored gazpacho soup followed by a three-course luncheon on June 17th to June 19th.

Known for his signature elegant, contemporary French cuisine, Chef Esnault has perfected the craft of preserving the integrity of ingredients in their preparation and pairing them harmoniously on the plate.  Chef Esnault’s five-course prix-fixe dinner menu will offer an optional wine pairing to further enhance this unique culinary experience.

La Panetière Restaurant Proprietor Jacques Loupiac, is excited to welcome his friend, Chef Tony Esnault to cook at his restaurant, “I have owned La Panetière for 23 years and it is so gratifying when I can offer my clients an opportunity like this to have a once-in-a-lifetime experience in my restaurant.”

Trained at the François Rabelais culinary school in France, Chef Tony Esnault fostered his passion for precision, knowledge and flavor by working at Michelin-rated restaurants in Paris. In 1996, Esnault began working for Alain Ducasse at various locations internationally including Monte Carlo and San Francisco. While at The Ritz-Carlton Boston in 2004, Food & Wine magazine awarded Esnault “Best Hotel Chef of America,” and his cuisine won the restaurant four AAA Diamonds in 2004 and four Mobil Stars in 2005. Chef Esnault earned three-stars from the Michelin Guide New York City in 2006 while at Alain Ducasse at the Essex House, receiving the highest honor in the industry worldwide.  He then moved with Alain Ducasse to the St. Regis hotel to open Adour as Executive Chef, where he earned three-stars from The New York Times and two-stars from the Michelin Guide New York City in 2009.

“I am thrilled that Jacques has invited me to cook at his restaurant,” says Esnault. “La Panetière is exceptional to me because they are preserving the ultimate dining experience through every detail, which I strongly believe in and I am very excited to work with their team for the week.”