People are reading
You are at:Home»Food Links We Love»Burgers, Shakes & Fries in Greenwich

I’ve been hearing a lot about our suburban version of Shake Shack: Burgers, Shakes & Fries in Greenwich, Conn. So the other day, after I invited Alan Richman to lunch and he begged off going to Tarry Lodge (I guess he’d had enough pizza lately), I suggested BSF as an alternative. 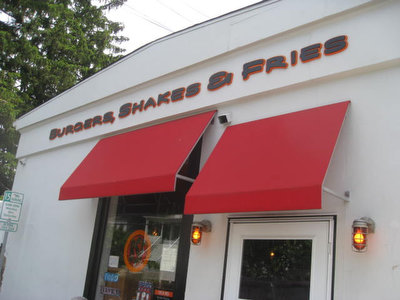 Alan got a single with cheddar and raw onions. 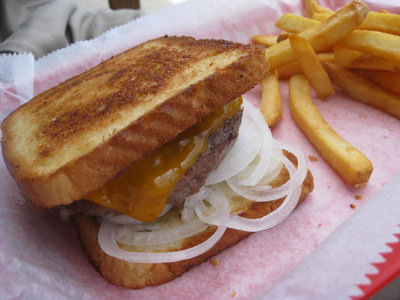 We split an order of fries. 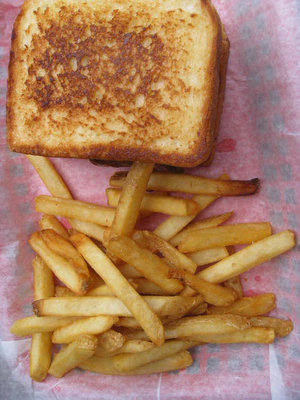 I got a single with cheddar and mushrooms. I was planning on getting gorgonzola (and took some ribbing from Alan for that) but once I saw the ‘shrooms, I decided to go for that.

Alan says he doesn’t like blue cheese on burgers because the cheese overwhelms the meat. He says it’s only become popular because the burger at the Spotted Pig made it trendy. I’ve had that burger and I think it’s delicious. So Alan’s admonshing didn’t talk me out of my gorgonzola; rather I prefered the ‘shrooms.

This is the kind of burger that makes a friend like to say he could take a bath in it. (In fact, I brought him one back to the office and that’s exactly what he said.) Owner Kory Wollins gets the beef from Masters Purveyors, which supplies beef to all kinds of great restaurants and burger joints. Each burger takes 1/3 a pound. You may choose single or double, and there are all kinds of toppings, but not lettuce.

The bread, which is buttered and griddled, comes from Rockland Bakery. The burgers, as you can see, are served patty-melt style: 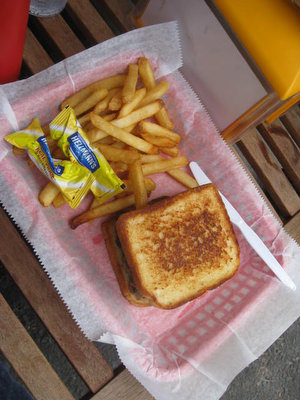 Yes. I put mayo on my burger. You got a problem with that? 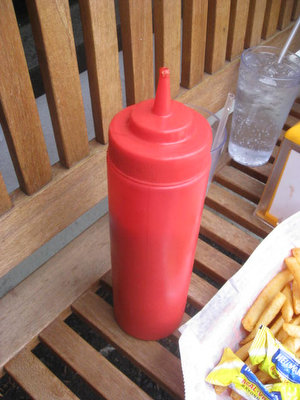 Alan got a seltzer. I got a birch beer.

The burgers are juicy, but not so juicy the grease runs down your wrists, and the patty is meaty but not dense. The crisp buttery bread is delicous and I really liked my toppings. (Next time I’m getting the gorgonzola, though.)

Here’s a look inside.

We ordered at the counter: 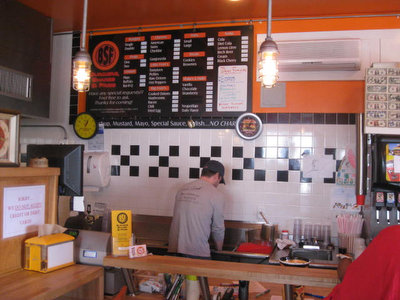 There are just a few seats — 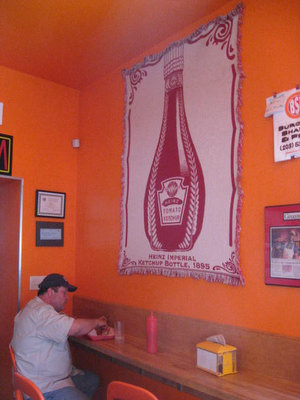 — so we took our burgers outside to the bench: 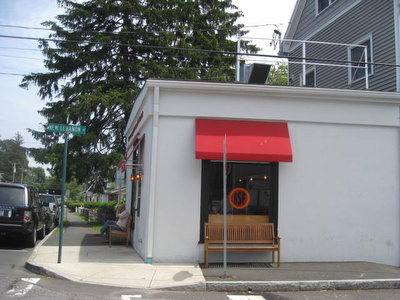 Sean, one of the employees, brought out our burgers, plus fries and ketchup. Because of the fine service, Alan called it the best restaurant in America. It’s a damn good one, that’s for sure. 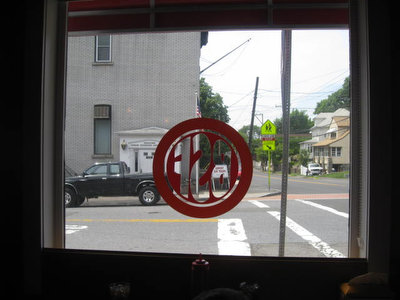 You can also get chicken (plain, bbq or buffalo) and hot dogs. I was also tempted by the topping of a fried egg. My friend (the one who likes to bathe in burgers) also got a chocolate shake and I sipped it on the way back to the office. Thick, rich and chocolately. Deserving of being in the name of the restaurant.

BSF is just over the Byram River from Port Chester into Greenwich.

Burgers Shakes & Fries web site here. The 411 is on its way.