People are reading
You are at:Home»Food Links We Love»First Taste: Comfort Lounge in Hastings

After nearly two years of waiting for renovations to be complete, people at Comfort Lounge Wednesday night seemed very, very happy to be dining there. After digging into the food — simple, homey, delicious — so was I. 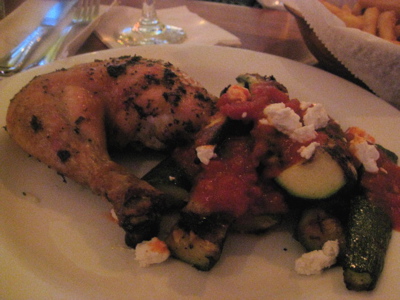 For several years, chef-owner John Halko, a former caterer for the film industry, ran a 5-table restaurant across the street, also called Comfort. He touted his organic ingredients and simple cooking, and it became extremely popular — especially for its roast chicken. Two years ago, he decided to expand.

You may have read how the story goes from here: he refinanced his house but, the economy already tanking, couldn’t get a loan to renovate his new space. So he came up with an genius idea: he sold VIP cards called Comfort Dollars with a 20 percent rate of return. For every $100 investment, diners get $120 worth of food in return.

Eight weeks ago, Halko and his team of diner-investors finally opened. Not only did he get $25,000 worth of cash infusion from the VIP cards (one for $10,000 and a bunch of others for $500 and $1,000) — the restaurant got a whole lot of buzz, and the community invested in itself.

“It generated a lot of buzz within our community,” Halko told me by phone. “Bringing people together and giving them more a sense of helping out in the community.”

It’s like the old-fashioned concept of bartering. Douglas Rushkoff, author of Life, Inc.: How the World Became a Corporation and How to Take It Back, wrote about the Comfort Dollars on BoingBoing.net last fall:

The entire scheme refocuses a community’s energy and cash on itself. Because our money goes further at our own restaurant than a restaurant somewhere else, we are biased towards eating locally. Since we have a stake in the success (and the non-failure) of the restaurant in whose food we have invested, we’ll also be more likely to promote it to our friends. And since we have already spent a big chunk of money on Comfort’s food, we’re more likely go get food there than dish out more cash for a meal somewhere else.

And the community was eating here on Wednesday. Every table was filled with families or foursomes, out for a night of good food at a fair price.

If you didn’t know about all the hardships it took to open Comfort, you might walk in and think: what took so long? There are a lot of hard surfaces. No art or mirrors adorn the walls. (Except above the bar.) The banquette doesn’t have pillows. And all the wood make it really hard to block out the noise of children.

But Halko says help is on the way. Upholstery on the banquette, for one. That should really make a difference. 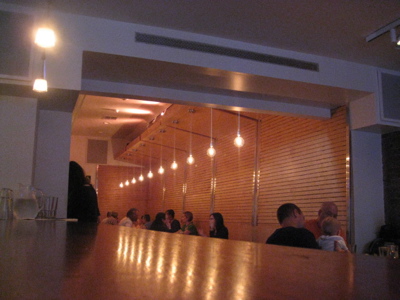 — but for now, I have just one complaint about Comfort. It’s not that comfortable.

But that’s my only complaint. Onto the food. It’s absolutely accessible, affordable and delicious. My friend Lettie Teague and I shared two entrees — each of which came with two sides. This one was a special. Shrimp in Coconut Milk, Lemon Grass and Basil ($18.95 with two sides!): 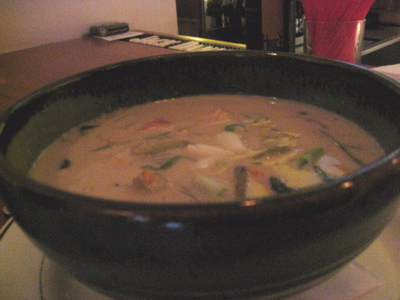 It was a little like a green curry, but not super-spicy. Just the right amount of kick. And the shrimp had a great texture.

With it, she chose her two sides, Organic Curried Chick Pea Salad and Sesame Sauteed Kale with Shiitake Mushrooms: 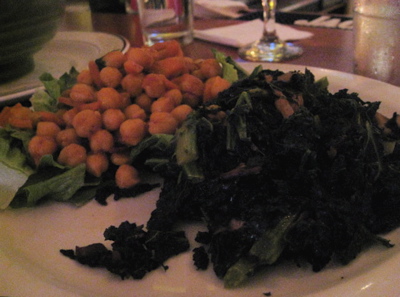 The kale was perfecly cooked and the mushrooms played nicely with the sesame, and the bit of ginger gave the dish a zing. The chick pea salad would have been better warm. The curry flavor was nice, but it was quite cold.

As you saw above, I got the quarter-dark herb-roasted chicken with two sides. ($8.25 With Two Sides!):

The chicken was so moist. I tried the herb version, but there’s another that’s made with Asian spices (anise seed, chilie powder and soy sauce among them). Comfort won a Best of Weschester for it in 2007. If it’s anything like the herb version, I’m sure it deserved it.

One of my sides was grilled zucchini with pomodoro and goat cheese: it was simple and soulful.

And speaking of simple and soulful,  John tells me one of the things he’s hoping diners will take away from the restaurant is an inspiration to cook like that at home.

“I have people eating in my restaruant two to three times a week,” he says. “And throughout the course of the years, I introduce these salads and side dishes.” By serving something like kale with shiitakes and ginger, he hopes that when people are planning their own meals, they’ll realize it’s not so difficult to put great ingredients together and make a delicious dish. He wants them take his ideas and get creative in their own kitchens. 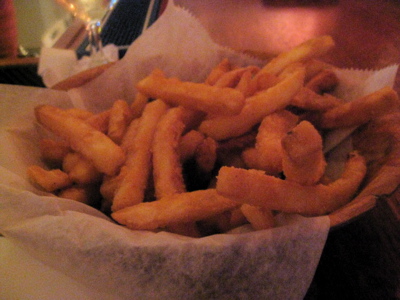 Fries. Crisp on the outside, fluffy on the inside. Just what you want. (And nice for dragging through Lettie’s curry, though I must say she was a little appalled by that. I made her try it, though, and she agreed it tasted good. It just wasn’t really her way of doing things.)

Here’s another amazing thing about Comfort. For many years, Lettie was the executive wine editor for Food&Wine. So unless a place has a really great wine list, she likes to bring her own. She doesn’t mind paying corkage, of course.

And Comfort’s corkage was an astonishing $7. Seven dollars. And I’m glad, too, because that’s the only other complaint I have about the place. Though the cocktail list is very ambitious, the wine selection is a little rudimentary, especially on whites. I was very, very happy to have Lettie’s gruner veltliner along, rather than the Mirassou pinot grigio I sipped while waiting for her. (That was $7, too, by the way.) 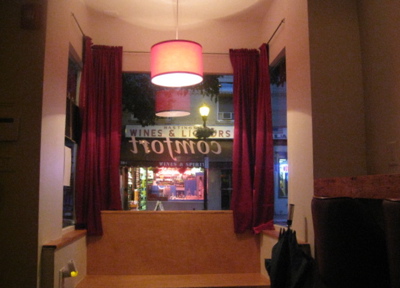 In order to open, John had to close down the original Comfort. But he says he’ll be re-opening it. He’s tossing around a few concepts, including a bakery (with gluten-free items) and a barbecue joint that will serve ribs and ice cream.

For now, we have a real winner in Comfort Lounge. The people in Hastings are lucky to have it, and even luckier to have invested in it. And I think it’s part of a growing trend of good, neighborhood restaurants serving well prepared food for not very much money. Comfort, Cookery, Sweet Grass… hey… that’s a lot in the riverowns, huh? Everyone else better catch up!