People are reading
You are at:Home»Restaurants»A Spanish Take on Pizza: The Coca 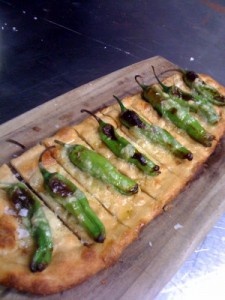 Christian Petroni, the chef de cuisine at Peniche in White Plains, has put cocas — or Spanish pizzas — on the menu, and he’s getting really creative with the toppings. He emailed me this photo of one he recently had on special: Shishito peppers, aged Mahon cheese and truffle oil.

Cocas are really flatbreads with toppings. In Spain, they can start with anything from caramelized onions to roasted piquillo peppers.

Christian served me a coca with figs, bacon and gorgonzola about six weeks ago, and man was it delicious. Now that theses cocas are on the menu, I predict they will be very popular indeed. He’s doing two or three kinds each night.