People are reading
You are at:Home»Food Links We Love»Alex & Henry’s: 10 Years Later. Your Memories?

I haven’t been around long enough to remember Alex & Henry’s — the former restaurant and catering hall in the Lord & Taylor shopping center in Eastchester.

But it’s come up in conversation several times in the past week or so. Peniche chef de cuisine Christian Petroni worked there when he was in high school, and Anthony Delfino, chef-owner of Al Dente in Harrison used to be a chef there, too. 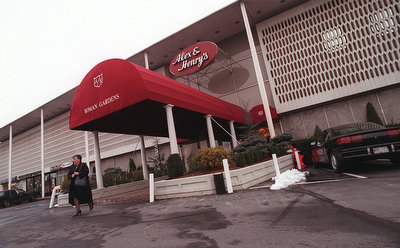 My colleague Karen Croke, who has lived in Westchester for 40 years, says she went to at least three weddings there.

“When you got invited to a wedding there it was so exciting,” she tells me, “Because it was a dress-up kind of place. It was huge. It was glitzy.”

She remembers the catering part of it best, but there was also a restaurant.

So what do y’all remember about Alex & Henry’s? Was the food any good? Can you share some memories?

EASTCHESTER – Vince Natrella and Tony Colavita have hand-picked candidates for county executive, judgeships and statewide office together. And they’ve done it, for the most part, over lunch and dinner at Alex & Henry’s Roman Gardens.

So it wasn’t surprising to find these Westchester County party leaders there yesterday, enjoying yet another lunch and worrying about what will become of their ample waistlines after the end of this year, when this 25-year-old restaurant, catering hall and de facto political clubhouse closes for good.

The owners, Mario Faustini and Nat Recine, have decided to take their landlord, shopping center owner Sal Pepe, up on his generous offer to buy out their lease so he can rent their 28,000 square feet of space to a retailer.

” I’m very happy for them, ” said Colavita, the former longtime head of the county Republican Party who is also their lawyer. ” I know what they’re being paid, but I’m sad because I’ve got to find a new place fast. I’m liable to lose weight. ”

” To a lot of people, Alex & Henry’s is Eastchester, ” said town Supervisor Jim Cavanaugh, who will hold a fund-raiser there on St. Patrick’s Day. ” More importantly, it’s been a place where an awful lot of political events have taken place. Every governor going back to Rockefeller has been there. ”

The loss is all the more devastating because it comes on the heels of the closing of Andy Albanese’s Restaurant, another GOP stronghold in Eastchester.

” It’s been a member of the family for all of us, ” said Yonkers City Council President Vincenza Restiano, Faustini’s sister, who has attended her share of dinners, weddings, christenings and sweet 16 parties at Alex & Henry’s. ” This is the end of an era. ”

If only the oak-paneled walls could talk. Over escarole and white beans, Colavita genially admitted to hatching umpteen political deals at Alex & Henry’s – either at his power table close by the kitchen, where he sat yesterday or, when the topic was really hot, in a back room. Yes, District Attorney Jeanine Pirro’s political ascendance was plotted at this restaurant, without her presence, of course, Colavita said.

” Generally, we don’t have the object of our discussion at the table, ” he explained.

Political careers have also gone up in smoke here. After Pierre Rinfret, a 1990 Republican gubernatorial candidate, failed to appear at a GOP dinner because the dinner committee wouldn’t send a helicopter to fetch him, his political fortune went into the Dumpster, along with most of the 500 uneaten steak dinners.

Natrella, the chairman of the county Conservative Party, likes the food, the service and the respect so much that he had Faustini send him meals in the hospital when he was recovering from open-heart surgery. When he was released after a bypass operation, he came straight there for lunch, still wearing his hospital identification bracelet.

” It is a place that has been looked upon as the icon for the Republican Party for our fund-raising events, ” said Sen. Nick Spano, R-Yonkers, county GOP chairman. ” We feel comfortable there. There are many great memories, and it will be missed by many. There have been times I have had breakfast, lunch and dinner there. I’d walk in, and the bartender would say, ‘Here’s your Diet Coke, senator.’ ”

Although Faustini is vice chairman of the Eastchester Republican Party, he never let politics interfere with business. Democrats such as Assemblyman Ron Tocci, D-New Rochelle, and Domenic Procopio, who heads the Calabria Society in New Rochelle, have also hosted crowded dinners there.

When Faustini and Recine opened the restaurant in 1975, they had instant name recognition. Alex and Henry Recine, Faustini’s grandfather, and Recine’s father, respectively, had opened the first Alex & Henry’s in 1946 in the Bronx after emigrating from Ripi, Italy. They built their Bronx business from a bar and grill to a major restaurant on 161st Street. It became an extension of the Yankee clubhouse, a favorite with fans and the judges and lawyers who frequented the nearby Bronx County courthouse. That restaurant is being sold.

In Eastchester, Alex & Henry’s also had one of the biggest ballrooms around, predating the shore clubs in New Rochelle. Even before they brought their blend of Italian-American and continental fare to the restaurant, it had played host to Republican Party dinners and up-and-comers. On June 1, 1966, the guest speaker at the Westchester County Association dinner was Richard M. Nixon, who had not yet declared his candidacy for president.

At the time, the restaurant was known as Schrafft’s Country Restaurant, the wait staff was female and a fashion show at lunch gave diners some eye candy along with their cocktails and crustless cucumber sandwiches. When Faustini and Recine took over, they gradually phased in male wait staff in tuxedos, hearty Italian fare and decor that now favors etched glass, crystal chandeliers, copies of Old Master paintings on the dining room walls and oak paneling in the entry hall.

At 57, Faustini isn’t ready to hang up his party-planning hat just yet. Although he hopes to play a little more golf, he’s looking around for a good location to open a new restaurant with his 26-year-old son, Mario Jr.

Although the restaurant has played host to politicians, movie stars and sports idols, Faustini’s fondest memories are of the many happy brides he has made queen for a day.

” When we take care of all our brides and they walk out of here extremely happy, ” Faustini said, ” that takes the place of any political event or dinner-dance. ”

Celebrity diners at Alex and Henry’s

Along with the local politicians who have eaten their way to power at Alex & Henry’s, these are some of the famous people who have dined there over the years:

We also have the obituaries of owners Mario E. Faustini and Nat Recine in our archives. Recine died in 1999, before the restaurant even closed. Faustini died in 2004. If you’d like me to cut and paste those, just let me know.