People are reading
You are at:Home»Restaurants»First Taste: Lolita Cocina, the New, Cool Mexican in Byram

The other night I tried a few small dishes at Lolita Cocina & Tequila Bar in the Byram section of Greenwich — right across the bridge from the Tarry Lodge. I love the setting. It’s like goth meets biker and old saloon Mexican all rolled into one. The food is interior Mexican, not Tex-Mex, and it’s creative, fun and, from what I tasted, mostly very delicious. Dinner starts with a dramatic dry ice presentation of a grapefruit granitee: 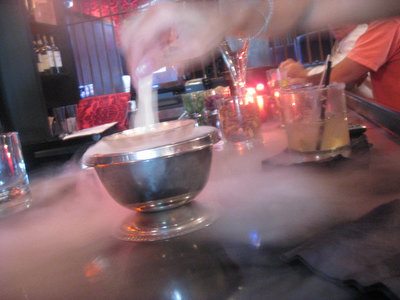 My friend and I started with margaritas at the bar. I highly recommend this. If you don’t go for margaritas, try one of the restaurant’s more than 147 kinds of tequila. 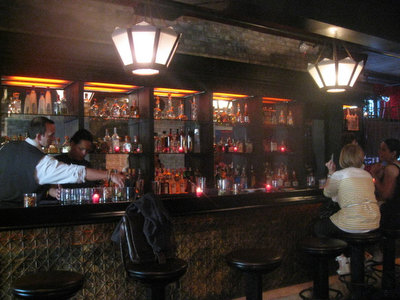 We enjoyed two cocktails off the list: the Morena (brown sugar, lime, Sprite and Corzo Blanca tequila) and the Lolita (Sauza ‘100 years, C’ointreau, fresh lime, cane syrup and a squeeze of grapefruit). Both were terrific. 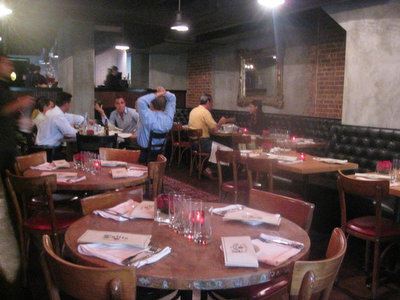 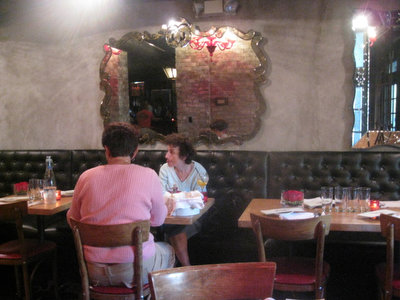 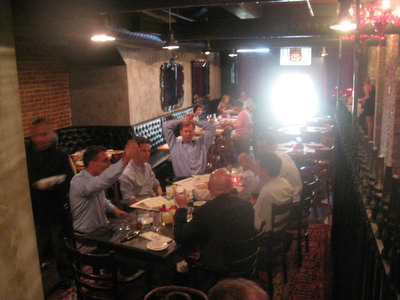 There’s also a dining room with big round booths and one long communal table. It’s behind me at the top of the stairs where I’m standing to take this photo. And, as you’ll see later, there’s outdoor dining too.

Just as at most Mexican restaurant, you start with chips and salsa. But unlike most, you get three kinds of salsa. One chipotle, one tomatillo and one tomato: 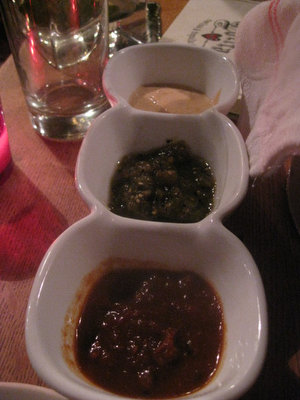 The chips were fresh, hot and crisp. Very nice: 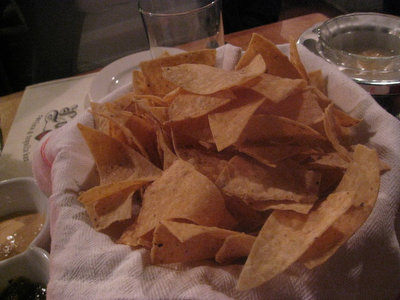 Pllus you get a bottle of Lolita hot sauce to go alongside. 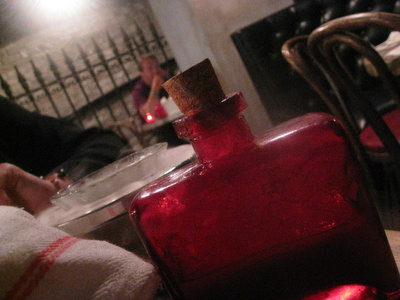 There’s a bite, but it’s a good bite.

I decided to try the tortilla soup, described as “rich chicken broth over pulled chicken, crisp tortillas, avocado, pico de gallo, green chiles and queso blanco.” It comes with all the fixin’s — 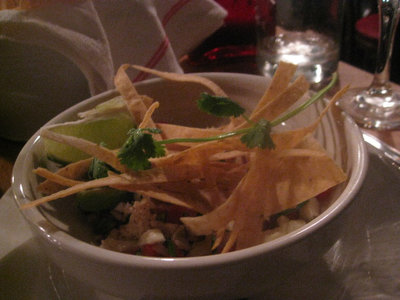 — and then the waiter pours the broth over the bowl: 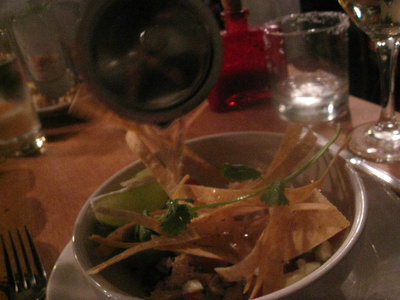 I liked everything — except the broth. I’ve eaten tortilla soup all over Mexico (especially in central Mexico where it’s a regional dish and sometimes called sopa Azteca), and I’ve never had it with a clear broth. Usually the soup is made with a rich tomato base that’s pureed and cooked again til it’s a dark brownish red… then you add the broth. This was too thin. It belonged instead in a soup like chicken lime soup from the Yucatan.

Sorry. I’m very particular about my Mexican food! I lived there for a year and I cook it often. So that’s how I know that these ceviches — all three kinds — were out of sight: 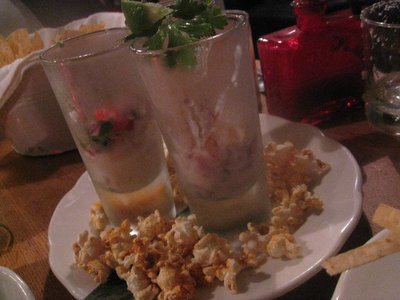 It’s a tasting. The traditional has grouper in fresh lime juice, serrano chile and red onion. The sangrita has shrimp and scallops with tomato, orange, hot sauce and avocado. The coco has ahi tuna, lime, cilantro and jalapenos. All three were very well balanced. The fish was not too far cooked by the acid (the tuna was barely touched by it. It might have been tartar, in fact) and there was just enough heat to make it interesting. Bravo! 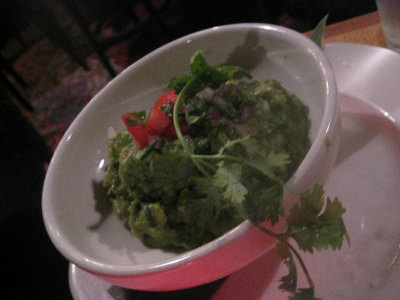 Fresh, good and just the way I like it: without a bunch of tiny chopped onions mucking up the creamy texture — but with enough big chunks of avocado to keep it interesting. 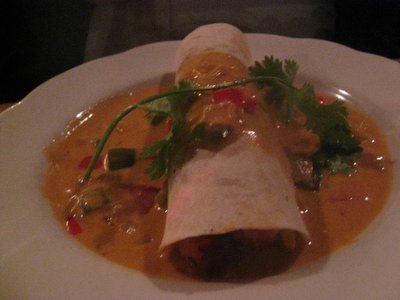 Ancho-glazed lobster, fire-roasted corn with chipotle chiles and Monterey Jack cheese. The flavors were very nice and bold but the texture was a little soggy. Still, well done and a far cry from sloppy melted cheese with gloppy beans and overcooked rice. 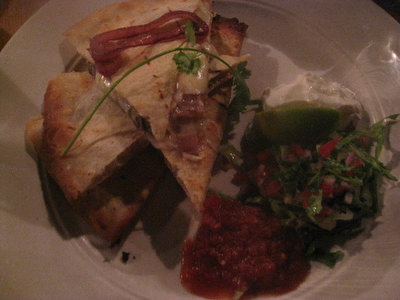 Garlic lime grilled skirt steak with barbecued onion. I loved the size — so many quesadillas these days are so fat they should be called quesadolas, I think — and the steak was nice. The tortilla, unfortunately, was a little greasy. I loved the sides, though: Really, so fresh, like everything we tried.

We decided to skip dessert, but they brought out a cotton candy with pop rocks on top! Yes — pop rocks. The ones rumored in the 1970s to have killed Mikey from the Life cereal commercial after he downed a box with a bottle of Coke. :-0 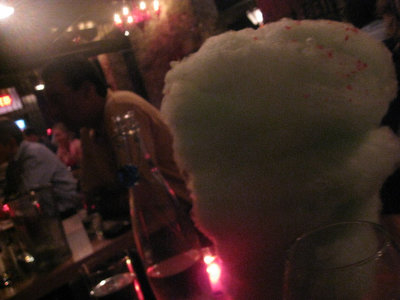 On our way out, we looked longingly at the people dining al fresco (the tables were full by the time we’d moved from the bar): 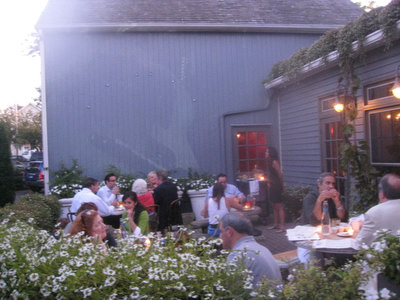 And look how cool. They’re showing old Westerns on the side of the barn. 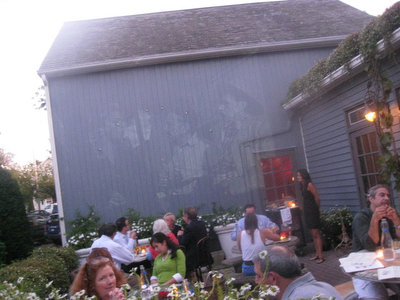 I’m really into this restaurant. The ceviches were fantastic. The guac was great. I love the atmosphere. I love the selection of tequilas and the quality of the cocktails — and I love the fact that someone, finally, is taking Mexican food very seriously around here. But not so seriously that they don’t want to have fun. The dry ice and the cotton candy make sure of that. ¡Andalé!

The 411 on Lolita Cocina & Tequila Bar. (The address and phone are there. Description coming soon.)