Good morning and happy Monday. A little frost on the pumpkin last night, huh? My plants made it through, but I think I live in a micro-climate that’s one zone higher than everybody else because I live on the slope of the bank on the Hudson, and the water keeps my neighborhood warmer, plus I live pretty close to my neighbors so our houses give each other heat.

I had a small dinner party on Thursday night (that’s one good thing about jury duty… at the courthouse you’re always done by 5). I made tacos al pastor — one of my favorite dishes from my time living in Mexico. Traditionally, marinated pork and pineapple are layered on a vertical rotisserie, almost like a Mexican version of gyro or schwerma.

Here’s a photo of the spit from a wedding I went to a couple of years ago in Cuernavaca. At the end of the 12-hour affair (an amazingly fun time with dinner, dancing to three bands and more props than you could shake a sombrero at), the hosts brought out a taco vendor. Your late night trip to the taqueria, taken care of right on the grounds of the reception: 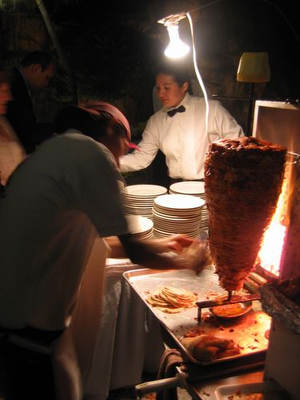 Well, I don’t have a vertical rotisserie, so I grilled my pork and pineapple separately the day before. Then I held back a little of the marinade and combined it with some of the pineapple juice that leaked off the pineapples as they stored in the fridge in a bag. I reheated the pork-pineapple slowly with the sweetened marinade. It was really delicious. Here’s my husband’s leftover plate on Friday night: 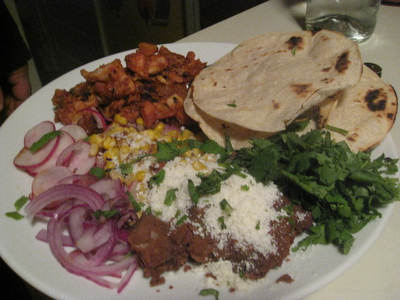 Served with refried beans, corn off the cob, radishes and cilantro. (On Thursday I served with a salad, too. You’ll see in a sec.)

On Thursday for dessert, I served David Leite’s Portuguese Orange-Olive Oil Cake from his new cookbook, “The New Portuguese Table.” It was fantasmagorical. 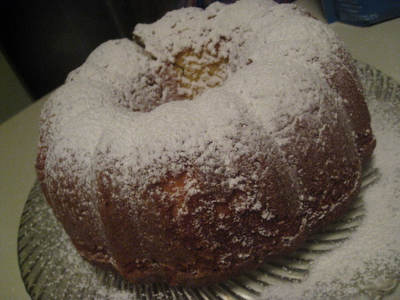 The beauty of this cake (especially for those of us on jury duty) is that it taste better if you make it a day or two ahead. 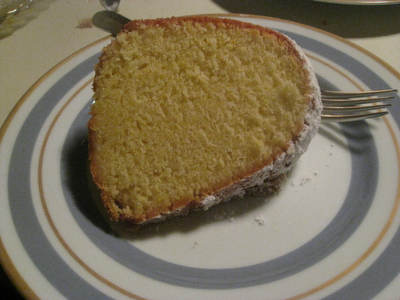 The texture is so wonderful. It’s moist and rich without being too cloying. The orange flavor just dances there in your mouth. As my friend said: “You know when you have a cake that doesn’t need icing, you’ve got a great cake.” Here is the cake recipe. I highly recommend it. (And it’s great with coffee in the morning, too.)

So speaking of the salad, here’s a look at my Friday supper, leftovers from the party, topped with panko-crusted chicken breast I baked in the oven for about 25 minutes at 350. (It was bone-in. Boneless you can go shorter.) 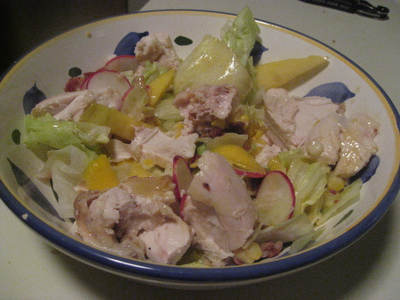 I used iceberg for this salad, but it takes advantage of the radishes, mango, corn and onion that I cut up for Thursday’s salad, which I made with a combination of red leaf and Boston lettuce and dressed with a cider vinaigrette. I love radishes on a salad.

After a long day working around the house on Saturday (stacking firewood, cleaning windows, etc. etc.), we decided to head out for pizza. I love the Mountain House in Sparkill. 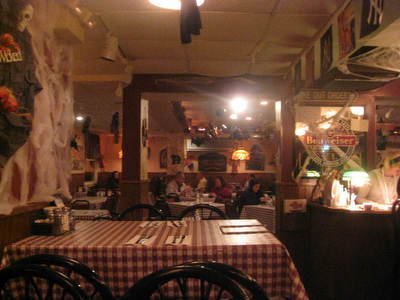 We shared stuffed mushrooms (not so good… flavorless and very watery): 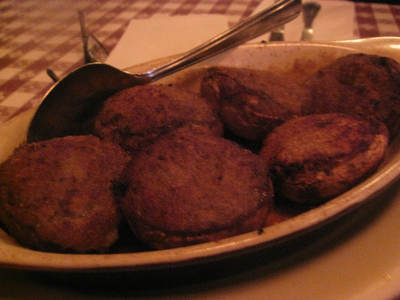 and a Casear salad (crisp and refreshing): 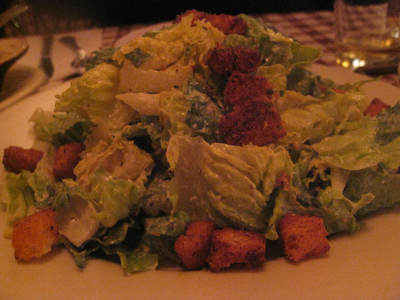 And two delicious pizzas. One plain and one with bacon and mushrooms: 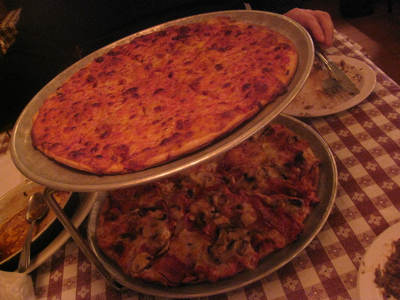 Good stuff. The leftovers are calling me….

So speaking of bacon. We had it for breakfast, too. We decided to splurge and made Belgian-style waffles. I have this adorable retro waffle iron from the 60s that my mother-in-law gave me. 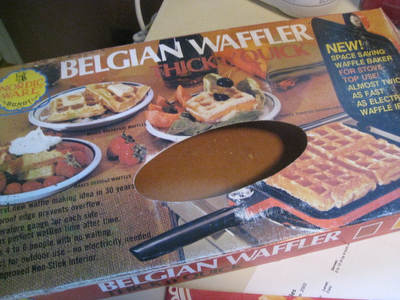 You use it stovetop, and it has little temperature gages on each side of the pan so you know you’re cooking it properly. 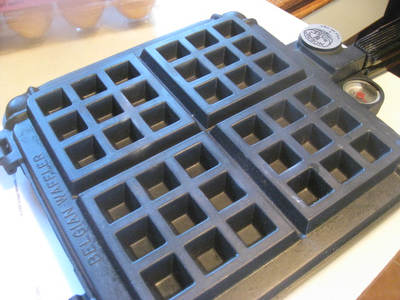 Isn’t it cool? I used a recipe from Emeril. I liked it because it didn’t use yeast, so I could get the waffles on the table before dinnertime. Classic Belgian Waffles recipe here. 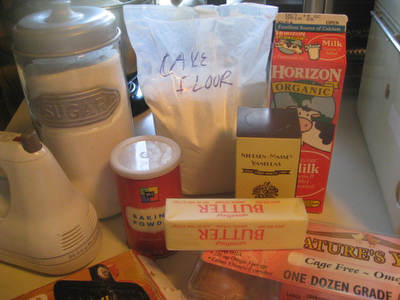 The waffle in the iron: 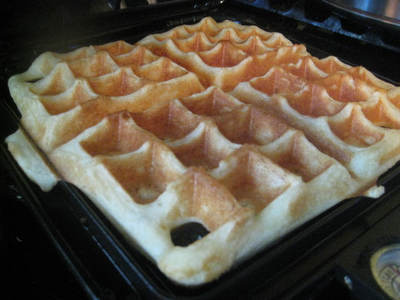 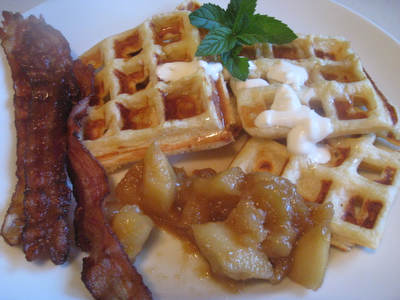 We also threw together an apple compote. Peeled and chopped some apples and threw them cold in the pan with some butter, salt and brown sugar. Wow.

And, because we hadn’t had enough pork products this weekend, we went to The Cookery in Dobbs Ferry last night. A party of six, we took the front table, chef Dave DiBari’s grandmother’s — or Mima’s — table, and feasted on a three-course meal we shared family style.

A few (of the many) highlights. Pork belly: 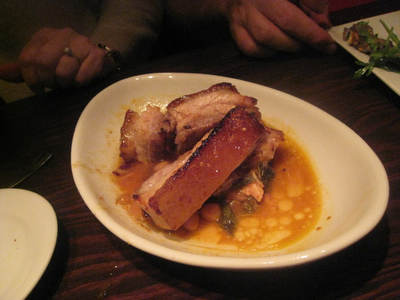 Pasta with a pork sugo and arugula: 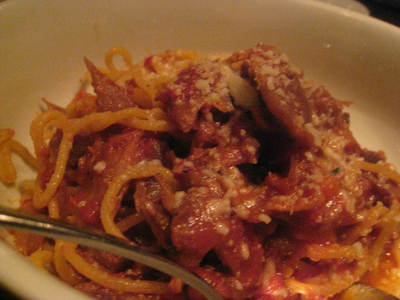 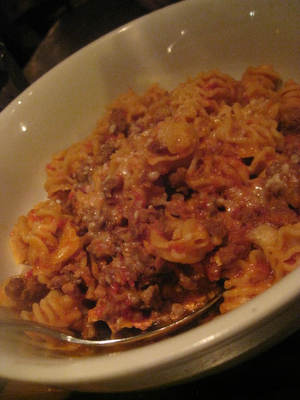 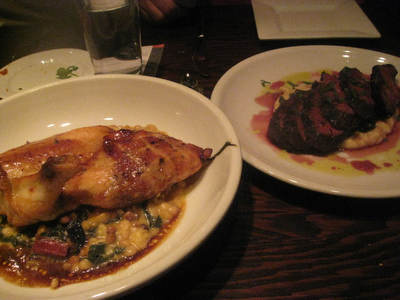 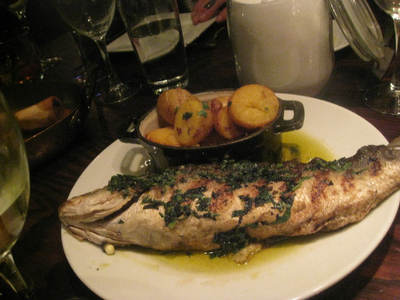 Let’s see… an hour on the treadmill…. a couple dozen miles on the bike…. maybe a couple times around Rockland Lake? Nah, still won’t make up for it. But it was a great food weekend, that’s for sure!

And for lunch? Back to salad. Where are those radishes, now?

Bon Chon Chicken opens in Northvale. (SH) (OMG I’m so excited about this. That is just spitting distance from Oak Tree Road in Tappan. Have you had Korean fried chicken yet? So crispy and delishy. And… btw, nice redesign on the Second Helpings blog. It’s much more readable!)
Emily is quite happy at Peekskill Brewery. (NYT)
Johnny’s Bar & Grill takes over Azzuri in Thornwood. (CH)
Recs for prix-fixe dinners in Westchester. (CH)
Bistro Citron in Scarsdale changes its chef. (CH)
Closed: Woody’s on Main in Mount Kisco. (CH)
The latest on American Dream Diner in Blauvelt. (CH)
Tea at the Ritz in White Plains. (NYT)
The Blushing Hostess makes Pumpkin Cake with Brown Butter Icing. (BH)
Rinku visits Spice Village in Tuckahoe. (CWR)
Miki’s trip to Eachester Fish Gourmet. (SSS)