People are reading
You are at:Home»Food Links We Love»Iron Pizza Chef: Battle of the Pepperoni-Olive

In the same vein of the Philly v. New York battle that I’m putting together for the food section, my husband and I often have Iron Pizza Chef battles in our own kitchen. We make two pizzas with different toppings and vie for whose came out best. You may remember a battle on the grill I posted about a while back.

Well, this week, my husband brought home some pizza kit from the big box store (he goes to those; I can’t stand them), and so we went for the big battle: 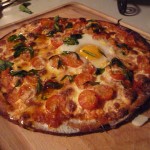 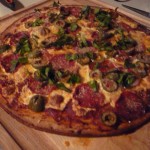 I know I mentioned before: the funny thing about these pizza “battles” is that his weapon is always the same: pepperoni and green olive.

I’m the only one that changes what my toppings are. This time? I spread just a tiny bit of jarred marinara sauce on the crust, then layered it with halved Sun Gold tomatoes and three cheeses: cubes of fresh mozzarella, shavings of Parmesan and shreds of Romano. 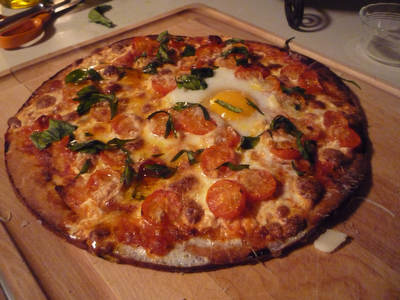 With about 3 minutes left to go, I cracked an egg on top. When it came out of the oven, I cut basil on top and drizzled it with olive oil, a la DiFara. 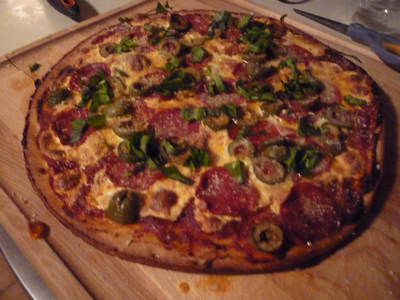 Pepperoni and green olive. He couldn’t resist the basil, either.

I think I won on this one, but you guys tell me. Votes welcome below.

By the way — one of the reasons my husband likes the pepperoni-green olive combo so much is because he is from Minnesota, and apparently that’s a pretty popular topping out there. (He loves it at Jake’s Stadium Pizza in Mankato, Minn., for example.) So here’s the funny thing: The Journal News publisher, Mike Fisch, is also from Minnesota. After he saw the last blog posting about Iron Pizza Chef, he told me he’s convince Gerardo’s, his favorite pizza place in Mount Kisco, to make a pepperoni-green olive pie for him. I’m not going to say it’s on the menu, but if you’re curious about it, just ask. I’m sure they’ll make it for you, too. Here’s a link to the Gerardo’s Web site.

Now, am I the winner this week, or what?