People are reading
You are at:Home»Food Links We Love»First Look (and Behind the Scenes at): Frank Pepe’s Pizza in Yonkers

I’ve tasted 5 pies from Frank Pepe’s in Yonkers over two visits in the last three days. And I’ve learned a few things:

1. Frank Pepe’s, founded in New Haven, Conn., in 1925, inspires rapturous loyalty in legions of fans.
2. The pizza is different from the cracker-thin, Brooklyn-style a lot of us are used to.
3. Tradition is important to the owners — the seven grandchildren of Frank Pepe himself. They do things the same way as always, right down to the rectangular sheet pans they serve the pizza on. Even in this, their fourth outpost, they use the same recipes, the same suppliers and the same ovens — even the castings of the old iron doors.
4. Those pizza ovens, fired with coal, are awe-inspiring.
5. The white clam pie — the signature dish at Pepe’s — is an acquired taste.
6. The original tomato pie — the first pie Pepe’s ever served (and it’s still on the menu) — is not an acquired taste. It is light, delicious and instantly endearing from the first bite.

My first visit, Wednesday, was with two friends. I waited in line with everybody else (about 20 mintues) and ordered three pies, some wine, a pitcher of beer and two salads.

Then I went back yesterday and met Francis Rosselli, one of the seven grandchildren. I was allowed to go behind the counter into the kitchen — and I got some pretty cool photos of the whole pizza-making process. (Those are further down in the post.)

We ordered the white clam, a pepperoni and the vegetable:

But not before waiting 20 minutes outside in a biting wind (the line moved fast): 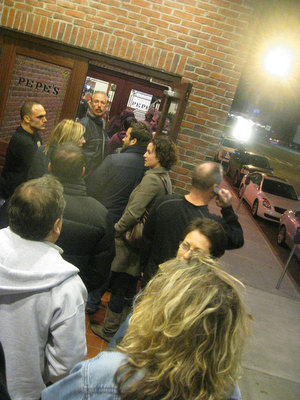 Once we were inside, it was warm and comfortable. 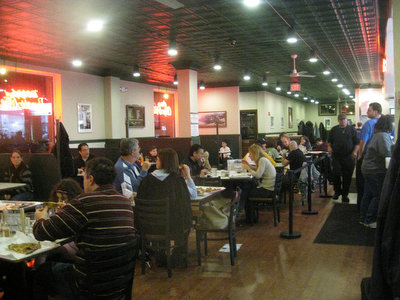 The kitchen is open to the dining room: 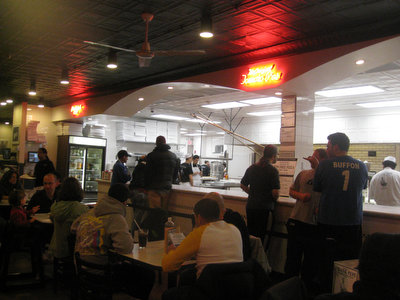 Besides the pizza, the only other dish on the menu is salad: 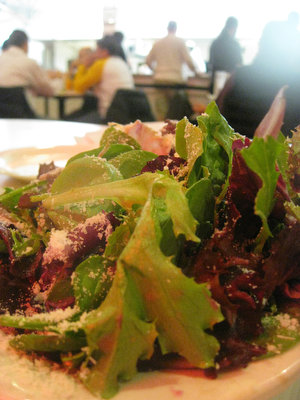 But on to the main event. This is the vegetable pie (small), made made with mozzarella, onions, spinach, broccoli, peppers, mushrooms. 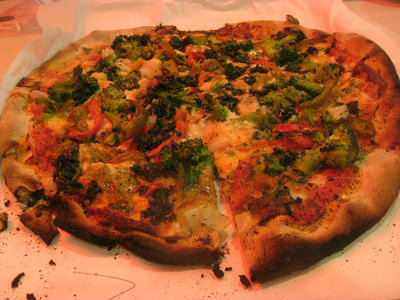 Here’s the pepperoni, the large size: 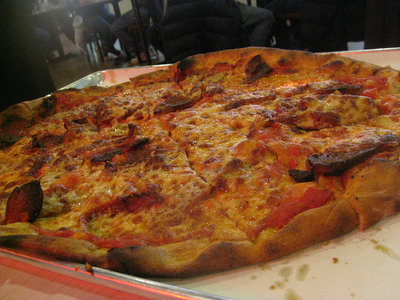 And, in the foreground, the white clam, a medium. 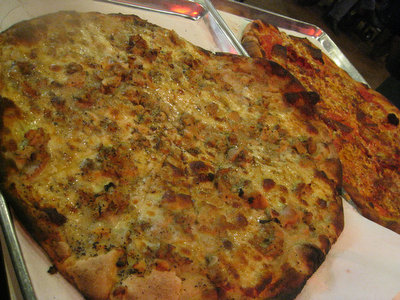 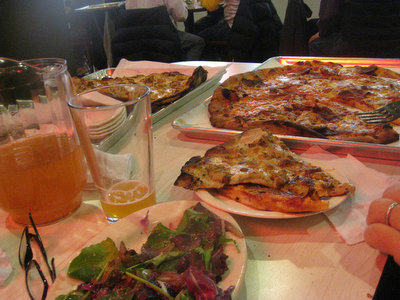 I found the pizza to be chewier than New York style, but in a good way. There are air bubbles in the crust, and the edges are charred and crispy from the intensely hot oven. The tomato sauce is light. The pepperoni is dry-style and spicy: You can tell its cured by someone who knows what he’s doing. And the clam? Well. I liked the clam. But only a little. It took some getting used to. Not because it wasn’t beautifully made with excellent, fresh clams. It was just a new idea to me at first bite. Some people will call me a heretic, I’m sure. But…

After my second visit, I took two pizzas back for my colleagues. An original tomato and a pepperoni/sausage with mozzarella. Even though they rode along in my front seat for 20 minutes,  and I ate them cold back at the office, they were fabulous. The tomato pie is made with just tomato sauce, oregano, garlic and grated cheese. I think because it has fewer ingredients, it’s lighter and crisper. As for the other pie, the combination of pepperoni (spicy and garlicky) and sausage (sweet and anise-y) is heavenly.

I loved those two pies. I’m sorry I didn’t take photos of them. I’ll just have to go back.

So here’s a look at my second visit: 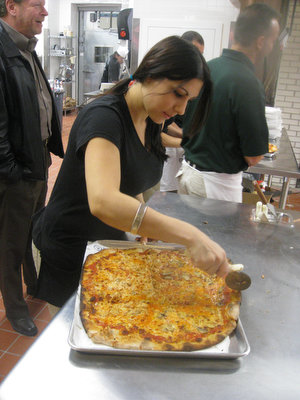 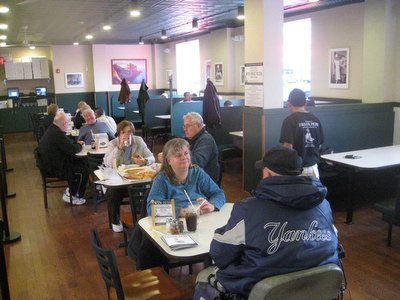 I had a sit-down interview with Francis Rosselli, one of the owners, and my colleague Matthew Brown shot some video. (Look for my story and the video on Wednesday.)

Then I followed a pizza from start to finish. Here is the dough, waiting to become crust:

Francis tells me the dough is made with a very high moisture content. That’s what gives it its chewiness. He reminded me that his grandfather was originally a bread baker, and that the ovens were made for bread. So the pizza crust is more like a flat, thin baguette — rather than a flatbread.

There’s a big marble table in the center of the kitchen. The marble — besides keeping the dough cool — helps get the dough smooth when it’s kneaded. 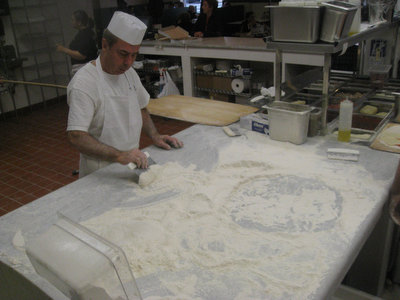 What pastry chef wouldn’t kill for something like that?!

They bring the peel to the center of the kitchen and place the dough on top. Then they build the toppings. This one is half clam, half mozz: 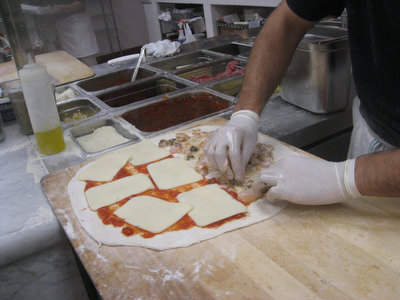 A little oil on the mozz… 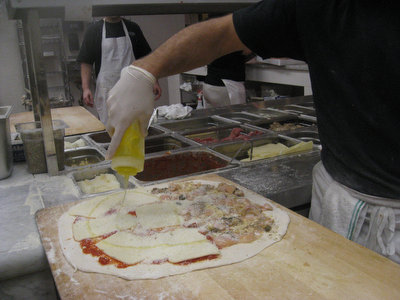 Then into the oven: 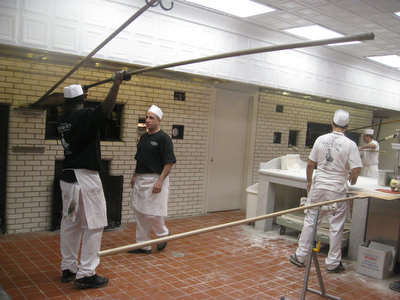 The ovens are exact replicas to within an inch of the original at Frank Pepe’s in New Haven. CFO Ken Berry tells me they had an old oven boarded up in back of the original location that wasn’t being used anymore. So they went in there with a camera and mirrors and took the thing apart piece by piece, and then put it back together. That’s how they learned how to draw the plans and make the replicas. 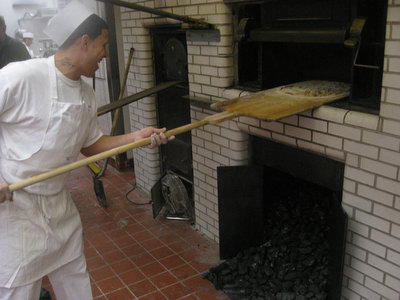 See the pizza? Itis  just to the side of the peel. 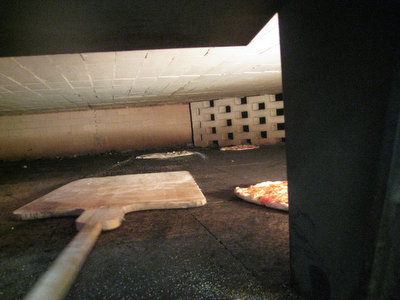 The grid of spaced bricks in back leads to the flue. 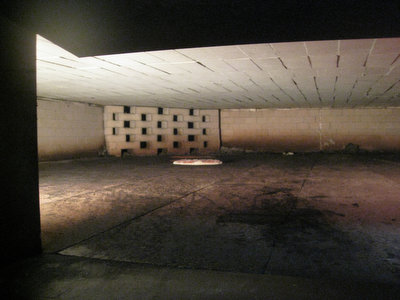 Because Frank Pepe was  a baker, his shop was originally a kitchen, and he delivered the bread. The story goes that he couldn’t read or write, so it was hard for him to keep track of his route. He decided to go takeout only. After that, he started making pizzas.

He wanted to change from a bakery to a restaurant, and so wanted a beer license. But because pizzas were such a newfangeled food, the government in Hartford didn’t believe he wasn’t a bakery.

So he and his wife drove up there with pizzas on their laps. They introduced the officials to the pizza, and they got their license.

Meanwhile, the ovens are still bread ovens. The family even say they “bake” the pizzas, rather than cook. The temperature for the “baking” is 600 degrees: 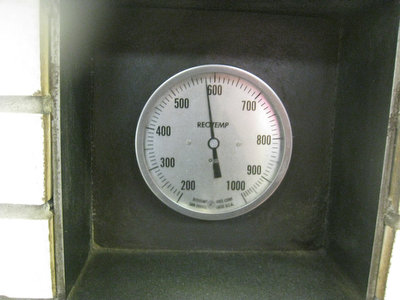 The iron doors are taken from castings from the original oven: 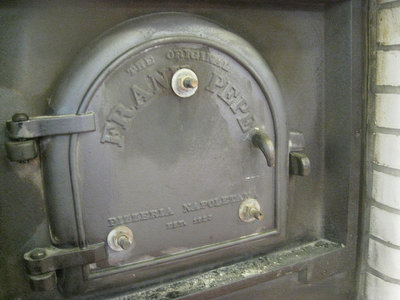 The restaurant goes through 1 ton of anthracite coal a week, which burns hot and clean:

It goes into the oven through this door: 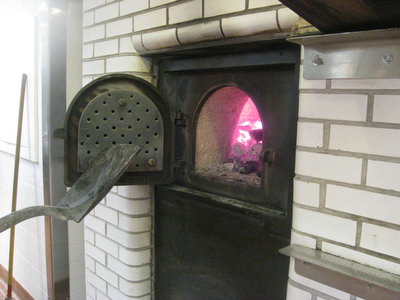 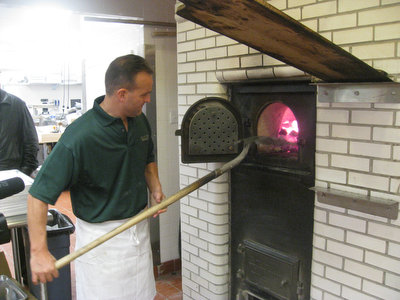 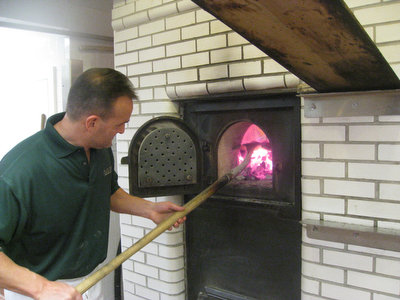 And burns right in the chamber on the floor of the oven. 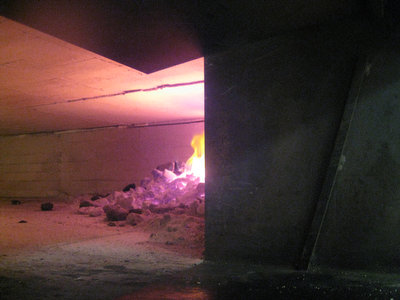 The flue pulls the heat over the bricks and the pizzas. They cook in 8 to 10 minutes. 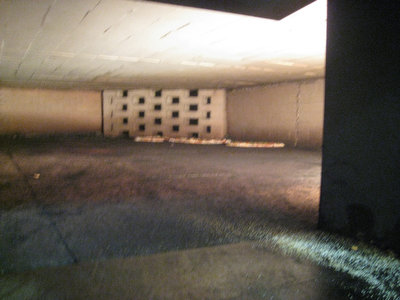 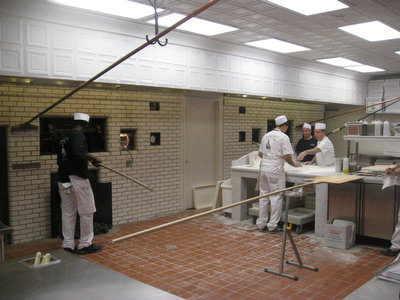 Then they pull the pizza out with the peel and land it on a sheet pan lined with parchment:

The reason they use a rectangular pan instead of a round one is that the tables are rectangular and, originally, Frank Pepe’s pizza was meant to be shared among a big family. Just plop it down in the middle and everyone can dig in. (They have made a concession to modern times, and today they stick tiny plates and a few forks and napkins under the parchment.)

The pizza is also cut in a special way (there is a diagram) so there are different sizes, but everyone gets a piece of crust. If Dad wants a big one, he can have it — and it will have a crusty edge. If junior wants a tiny one, well, same thing: 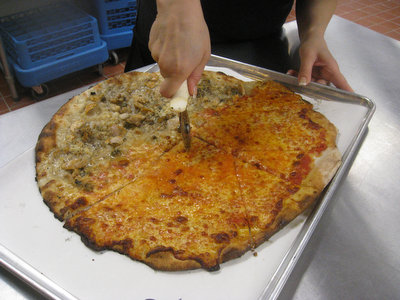 When you have tradition, you stick with it. 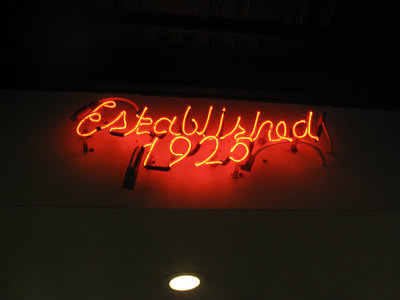 Here’s a menu board from the original New Haven location. It’s from the 1930s. 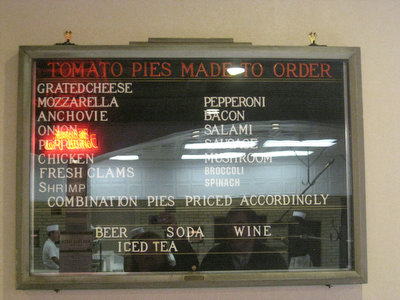 Maybe someday there’ll be a 80-year-old menu board from the Yonkers location, too.

The 411 on Frank Pepe’s coming soon. Until then: