People are reading
You are at:Home»Food Links We Love»It’s That Time Again: the Holiday Cabaret at X20 in Yonkers

I’ve been going to the Xaviars Christmas Dinner and Holiday Cabaret since back in the days when it was at Xaviars at Garrison. It’s a fabulous, fun evening with fantastic food and wonderful performances by chanteuse Mary Lou Shriber, pianist Paul Trueblood and two of chef Peter X. Kelly’s brothers — Ned and Paul Kelly.

The evening begins with passed hors d’oeuvres, egg nog and cocktails and is follwed by a four-course, sit-down dinner. After dinner, the show begins. Sure, it starts out all soft and sweet — but somewhere along the way, you’lre likely to see “the two ladies from Miami” — aka Ned and Paul: 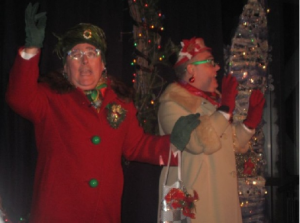 There are funny songs, classic songs, and, at the end, an interactive version of “The 12 Days of Christmas.”

Here’s my confession: I always request to be assigned “Five Golden Rings” because my family and I like to mimic Miss Piggy in the version from one of my favorite childhood albums, ” A Christmas Together” by John Denver & the Muppets.

Other folks bring props, like cow bells or swans on sticks. It’s a blast. And of course, the food is always superb.

The price, which includes dinner, entertainment, wines and hors d’oeuvres, is $150; $100 during the matinees.

And, just for kick,s after the jump, I’ve included a story I wrote for the 15th anniversary of the show.

Heaping on the holiday spirit

The Kelly brothers’ dinner and show overflows with sentiment – and silliness

Somewhere between the eight days of Hanukkah and the 12 days of Christmas, there are 10 days of Kelly brothers. And each December for 15 years, chef Peter X. Kelly and two of his brothers, Ned and Paul, have hosted a nightly holiday dinner and cabaret so full of holiday spirit that for some, it defines the season.

Ilsa Lang, who has attended with her family every year for at least the last decade, says: “We’ve had people rearrange their vacation schedule around it.”

The evening begins with champagne and passed hors d’oeuvres, including Kelly’s signature coconut shrimp. After the three-course dinner, but before dessert (a snow-dusted Yule log oozing with bittersweet Valrohna chocolate), Ned, Paul and Mary Lou Shriber perform the holiday show. It’s sentimental, hilarious, and always seasonal and full of joy.

What begins with a cooing ode to the magic of the holiday season ends with a rambunctious rendition of “The 12 Days of Christmas,” with audience participation so rowdy it has, at least once, brought a quizzical Peter Kelly out of the kitchen to make sure everything is under control. People stand on chairs; they twirl napkins over their heads; they ring cow bells; some (men) have even lifted their shirts – flashing the rest of the guests.

At a recent rehearsal, Ned Kelly sings a few of the first words of “Home for the Holidays,” the title of this year’s show.

“It’s beginning to look a lot like Xaviars – here in Getty Square.”

For the first time, the Xaviars Christmas show will not be held at Xaviars at Garrison, the restaurant where Peter Kelly built his reputation. Peter closed the Garrison restaurant on Jan. 1, anticipating the opening of the new restaurant, Xaviars at the Hudson, on the Yonkers pier. But once it became clear delays would prevent the holiday show from being held there, many people wondered whether they would be left without a 15-year holiday tradition.

But good food, holiday carols and egg nog were all traditions the Kelly brothers couldn’t imagine missing. So Peter found an understudy venue: the Philipsburgh Performing Arts Center in Yonkers. Like the Garrison restaurant, it has a ballroom. Unlike the Garrison restaurant, it has a stage. Instead of the 15-foot ceilings that were at Garrison, it has 30-foot ceilings, ornate balconies and velvet curtains.

“We tried very hard to find an avenue so all these years of tradition wouldn’t be lost,” says Peter Kelly.

And to make sure people get the same familiar experience they’ve been used to all these years, he has brought back Garrison’s former maitre d’s, Mark Montelone and Ezio Laurio, to oversee the service. And naturally, Peter will still oversee the kitchen.

“First of all, need I say, the food?” asks Melissa Kingston, who attends with her husband, Fred Hersh, and their family each year. “There is not food like that anywhere.”

Even so, the food is only part of the experience.

It’s also cool to people-watch; famous people like Gov. George Pataki and the actor Bill Murray have attended over the years. The room always looks like the sparkling vision of Christmas; Ned, an accomplished floral designer, transforms the space. Mary Lou Shriber’s voice is as shining as tinsel; she is the perfect foil for Ned. And when Ned and Paul perform their “Two Ladies from Miami” number in drag – complete with rhinestone cat-eye glasses – the sound of the laughter could trigger car alarms outside.

“It’s about being able to get bit by the spirit of Christmas,” says Ned Kelly. To help, Paul Kelly, who wrote the lyrics to the Broadway musical, “Swing!,” has written 3ÿ original numbers, including the one with the Getty Square mention.

He’s also written a satire about relatives set to “My Favorite Things,” a solo for Ned about his new retail shop in Piermont to the tune of “Santa Baby,” and another song set to “Jingle Bells.”

There are always two sing-along numbers, though, that Paul wouldn’t dare change. “White Christmas,” for which the lights are dimmed, and “The 12 Days of Christmas,” for which, for the first time, an actual, rather than virtual, spotlight will be turned on the audience. This is a number that guests come prepared for.

They request a certain character, and bring props. The time Peter Kelly came out of the kitchen, for example, was when the “Ten Lords A-Leaping” took a running start across the entire ballroom before jumping, hurdle-style, on cue.

Kingston tells the story of when her daughter, who was seated at the “Six Geese A-Laying” table, asked the kitchen for some hard-boiled eggs. When it came time for her verse, she tossed them onstage at Ned Kelly, who didn’t know they had been cooked.

“And he almost had a heart attack,” she says, laughing.

But Ned Kelly says that’s what the holiday dinner and cabaret is supposed to be.

“I believe these evenings are a success when we can get them to act like kids again,” says Ned Kelly. “It’s not just an elegant evening, or a spiritual evening – there’s out-and-out fun to be had.”