Good morning and happy Monday! There’s still snow in my backyard, if only a little. It’s kind of nice, isn’t it? My mom had a party on Saturday, and the snow lit by the flood lights through the windows made it almost a fairy tale setting. (She’s got a great house for decorating for Christmas — an old converted barn.)

But before the party, on Saturday morning, I squeezed in a run at Rockland Lake. The storm started with hail, and I was getting pelted ’round the final stretch! Afterwards, my husband and I warmed up with brunch at True Foods in Nyack. (I can’t find a web site to link to, sorry…)  It’s a cute little place on Broadway across Hudson Street from the post office. 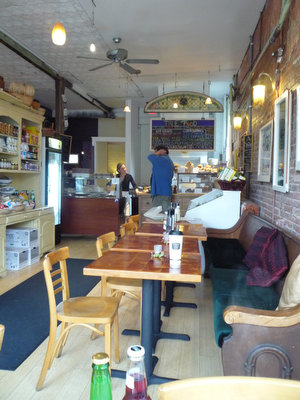 I got the mushroom frittata: 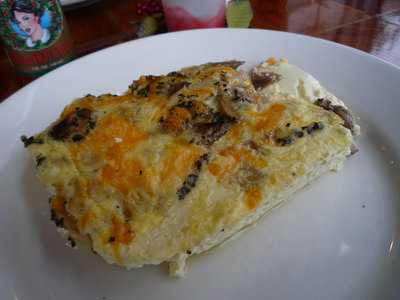 And he had the lentil curry with coconut milk and rice: 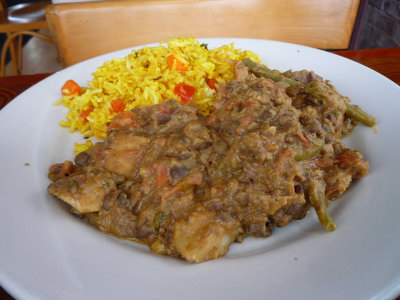 After a little trip to the library — after listening to Kurt Andersen’s Studio 360 this weekend, I’ve decided to try my hand at Moby Dick… I know… call me crazy (I mean, uh, Ishmael) — I headed over to help my mom set up for her party. I did the flower arranging and table decorating. 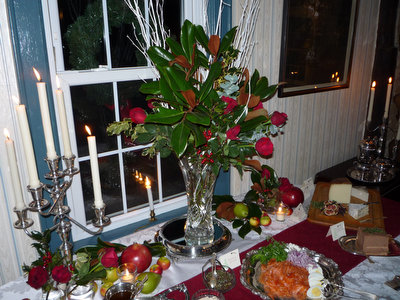 Magnolia leaves, holly, roses, eucalyptus and some of those white sticks my mom had lying around. Plus fruit and more magnolia on the table. What do you think? 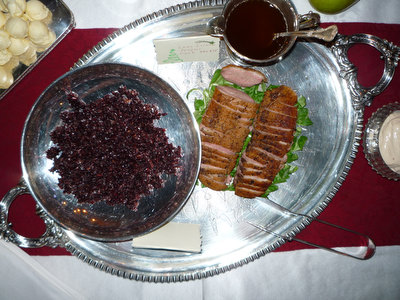 And they also had their delicious smoked salmon platter: 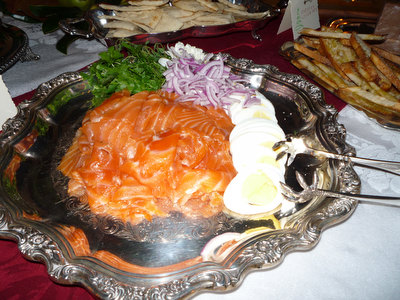 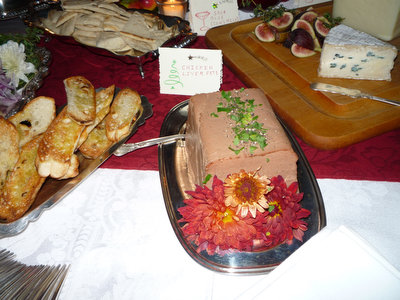 (I took a couple of those figs from the cheese plate and put them on top of my pate crostini… it was fab.) 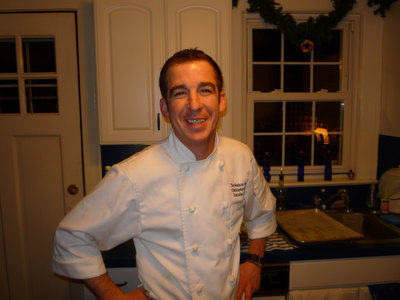 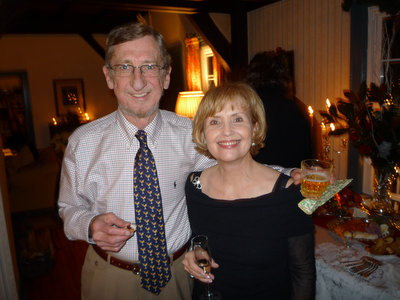 My brother and his girlfriend flew up from North Carolina for the party, so I hosted brunch the next morning before they had to leave for the airport.

Bagels — from Nyack Hot Bagels, of course — and pastries from Patisserie Didier Dumas: 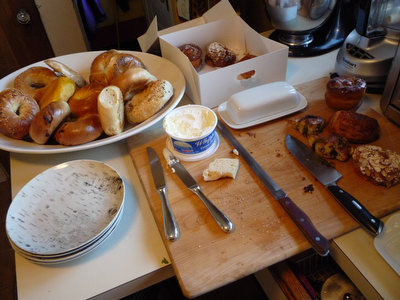 The bagels were a great way to use up the extra smoked salmon from the party. 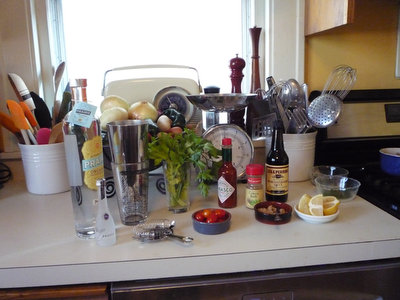 Have y’all tried that Prairie Vodka from Minnesota? I bought it because my husband is from Minnesota, but it’s actually pretty nice! It’s organic and the bottle sure is pretty. 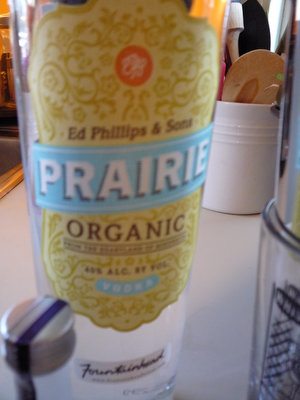 I’m sure you guys know I do love a cocktail, but not so much on Sunday morning. So I also set up a virgin drinks bar

Virgin peach and apple sparklers were in the fridge, and then there were these choices for juices: 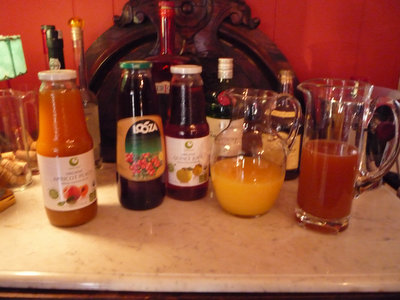 Brunch itself was eggs with chervil and parsley, bacon sprinkled with cinnamon, and grape tomatoes marinated with olive oil and thyme: 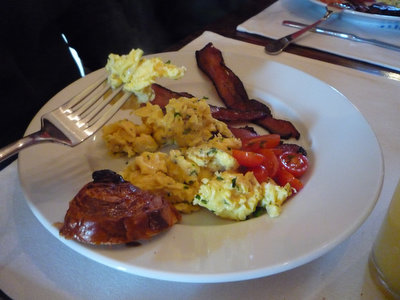 Plus whatever pastries or bagels people wanted to bring in from the kitchen!

My brother loves bacon so much he has a T-shirt proclaiming as much: 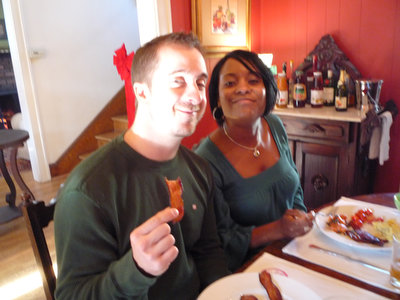 After all that work, my husband and I decided to take it super-easy for dinner. He drove down to Montvale and picked us up some Bon Chon chicken. 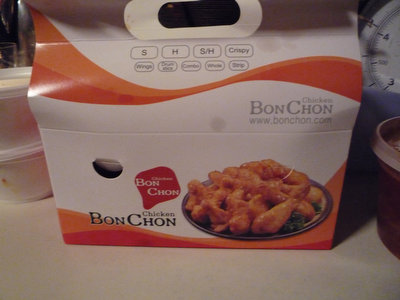 Nothing beats fried chicken (Korean style!) in front of the TV on a Sunday night, huh? 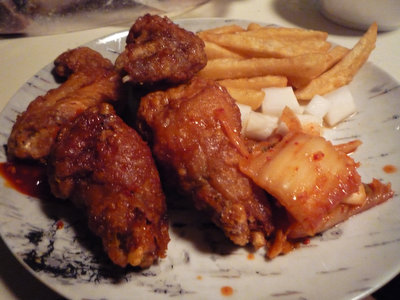 And a little kim chee never hurt anybody, either!

Moms discuss the best Mexican in mid-Westchester. (MLM)
Is Hunan Village in Yonkers closed? (CH)
The latest on FAB in Mount Kisco. (CH)
Tons of photos of FAB. (MMX)
Early reports on Il Castello in Mamaroneck. (CH)
More early reports on Limoncello in Mamaroneck. (CH)
At Los Abeulos in Ossining, breakfast is also great. (CH)
A good pork tenderloin at Sonora in Port Chester. (CH)
Three for the Road: Hastings-on-Hudson. (MMX)
Emily returns to Meateria in Larchmont, finding Victor is still behind the counter. (NYT)
Emily thinks Pollo a la Brasa Misti is “worth it!” (NYT)