Good morning and happy Monday. Only one holiday left to get through and we’re in the clear, right? I had a fun-filled few days. Thanks for indulging me the time off. On Tuesday night, I started off the weekend with a holiday dinner at a great new-ish restaurant in Manhattan called Aldea. 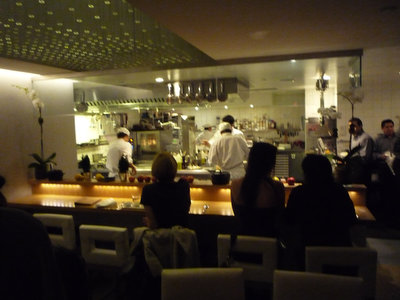 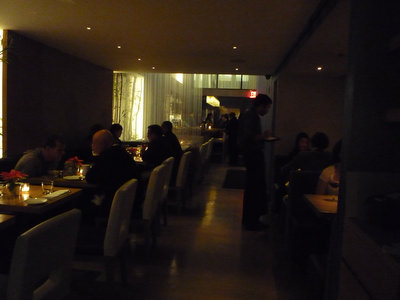 One of the dishes we tried was sea urchin toast.

The sea urchin, of course, was creamy and had the salt of the sea. But the other contrasts were a delight: crunch of the toast and a little spice, too.

We also tried the shrimp alhinho, which has garlic, coriander, pimenton: 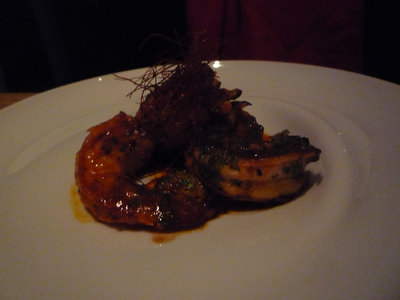 It was bold and delicious.

The most fun we had with a dish was the butternut and kabocha squash soup, which came with little liquid spheres they called “ravioli,” which made of serrano: 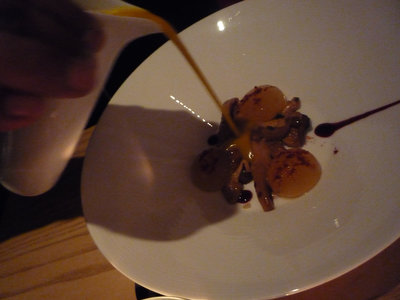 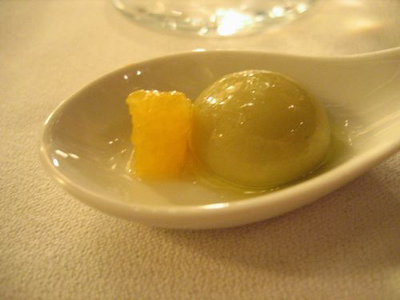 — the sphere bursts open in your mouth and the liquid seeps onto your tongue. A terrific, playful texture, plus the serrano flavor was a great match for the soup.

We tasted other things, too, but I can’t end without letting you know about the Arroz de Pato, a rice dish with duck confit, chorizo, olive and duck cracklings: 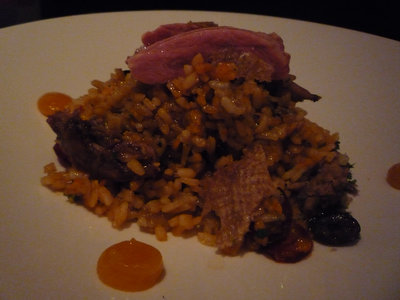 It was one of those deeply satisfying dishes that balances everything: rich and crisp, sweet and savory, crunch and soft — all of it is there for you to discover throughout the dish. Really.

When we left, one of the managers told us she thought we ordered the “greatest hits” dishes. But that just means there’s so much more to disover. I can’t wait to go back to Aldea and sit at the chef’s counter.

The next evening, I had a quiet pre-Christmas at home with my husband. We shared a platter of oysters: 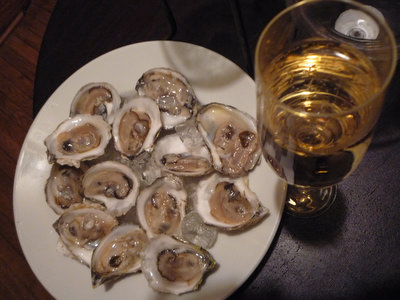 And he made a bunch of stuffed calamari for us — 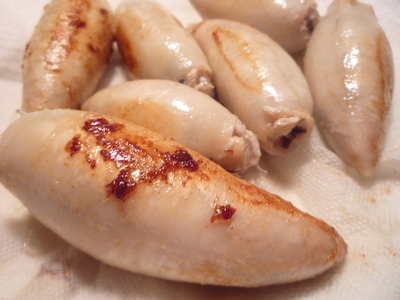 — which we paired with a great wine Scholium Lost Slough Riquewihr I got at Wine Geeks in Armonk: 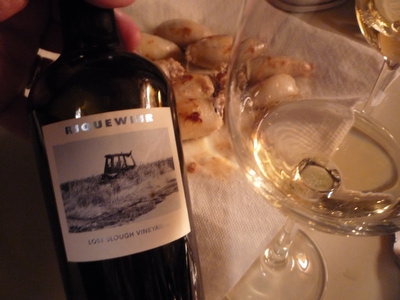 He found the recipe on Chow, and the stuffing was a pork sausage with herbs. He served it with nuoc cham, a Vietnamese dipping sauce: 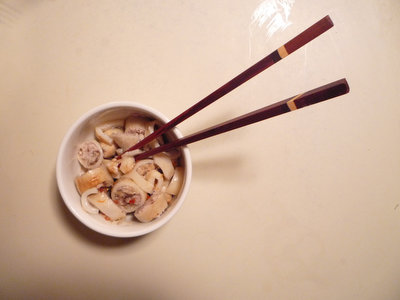 With all the cooking I was doing for Christmas, it was nice to have someone cook for me!

For my first baking mishap of the holiday, I give you the Chocolate Layer Mousse Cake that Vivianne Farre featured in Rockland magazine (and we featured in TJN) this month.

Everything started out fine — 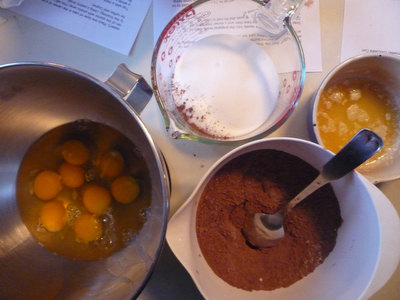 But I must have overwhipped the cream for the frosting: 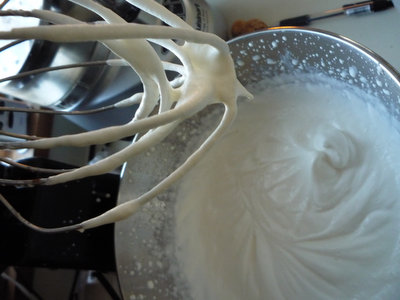 And, I let the cakes cool in their pans on top of the oven, so even though when they came out they were fine, they were completely overcooked and crumbly when I took them out of their pans. And my chocolate mousse wasn’t mousse at all. 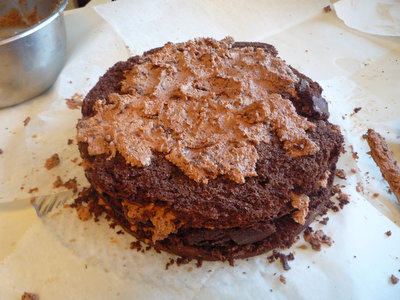 I thought at this point it was still salvageable, because I trimmed the cakes down to fit the amount of mousse: 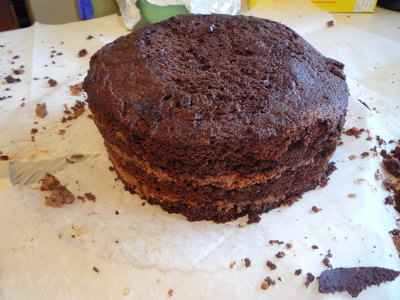 But oh no. My white chocolate mousse was also overwhipped: 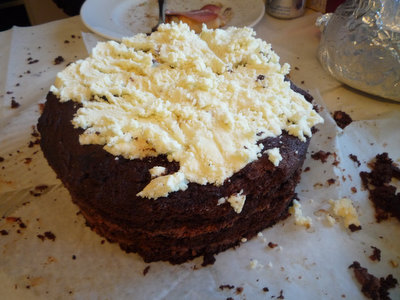 At this point, I called it quits. It was just dandy, then, to realize later that the timer on my coffeecake for Christmas morning also went off while I was downstairs in the basement wrapping presents, and so it was completely overcooked, too. When it comes to baking, I fear multitasking has its pitfalls. Thank goodness for Didier Dumas.

We went to my parents’ house for Christmas Eve supper. My mom made a chicken liver pate she’s had in her recipe box since I was a small child: 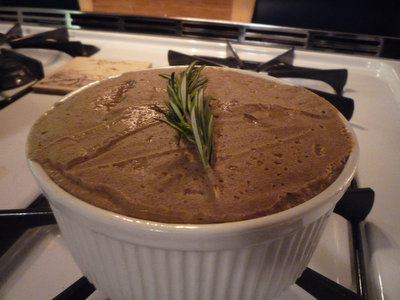 For the second year in a row, we made Peter Kelly’s Roast Rack of Pork. 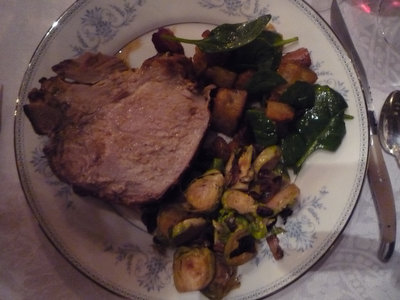 We served it with my dad’s great Brussels sprouts recipe (walnuts and onions) and Suzanne Goin’s sinful Caramelized Sweet Potatoes with spinach and bacon. Delishy. We had a pinot noir and a nice New York riesling from Hermann J. Weimer: 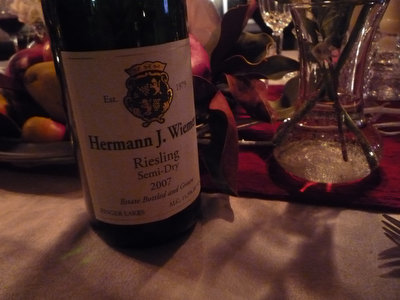 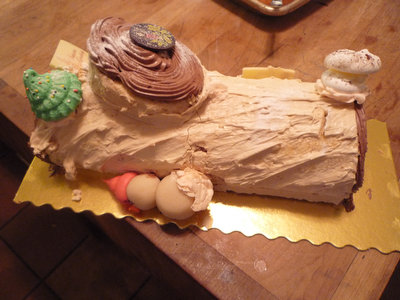 The next morning, we had two kinds of pork products with breakfast. (Hey! It’s the holidays!) My husband made homemade breakfast sausage with the ground pork he had leftover from the calamari, and my mom made cinnamon-sugar bacon twists. That, with eggs, fruit and coffeecake (I served mine anyway, and we had a store-bought one), made for a hearty breakfast indeed. 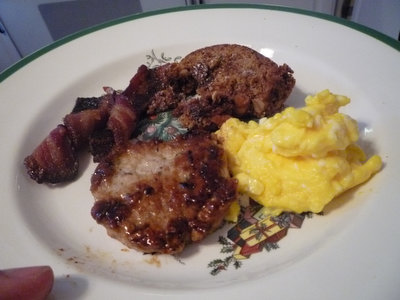 For Christmas Day supper, the family comes to our house for tamales. My mom orders them from the Texas Tamale Warehouse, and they are fabulous.

Naturally, we have the traditional Christmas margarita bar: 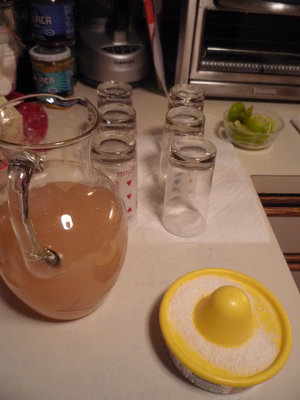 Don’t you love these glasses? Our family used to play a ton of Canasta (we still do on vacations) so my sister gave them to me a few years back: 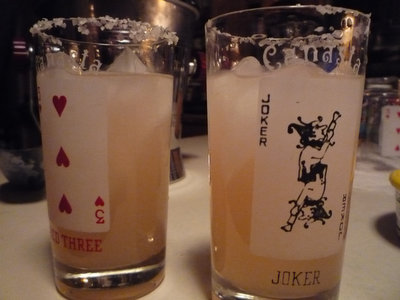 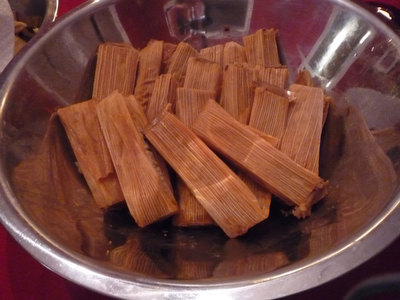 We got pork, beef and chicken. The best part is: they come frozen in vacuum-sealed bags, so you can just stick them in your freezer, and a few hours before it’s time to eat, you just drop them in a big pot of boiling water and they steam inside the bags. No muss.

I also made a bean salad with Christmas Lima Beans I ordered from RanchoGordo.com. Excuse the blur: 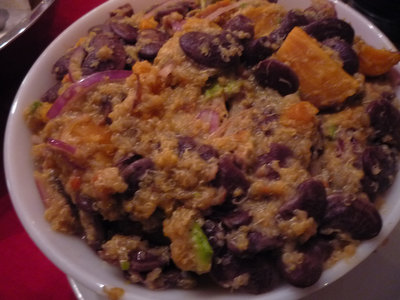 I found the recipe in the Rancho Gordo cookbook. It has beans, roasted beets, quinoa, avocado and onion. It’s lovely. Christmas buffet:

For dessert, we roasted marshmallows in front of the fire and made s’mores! 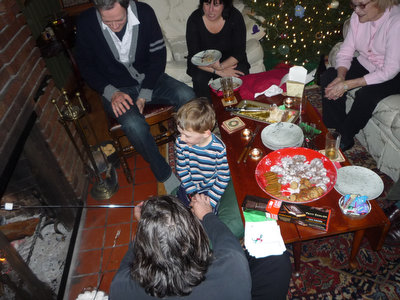 I’m exhausted! How about you?

For the rest of the weekend, I didn’t cook a thing or take a single photo. We had Thai takeout on Saturday (after seeing Sherlock Holmes… highly recommed!) and on Sunday, my husband heated up the rest of the calamari with some sauteed bok choy.

Merry Christmas, Happy Hanukkah, Happy Kwanzaa, and whatever else each and every one of you  celebrates. May there be joy and peace in the New Year.

And with that, here’s what people have been talking about while I was celebrating:
News on Tarry Fine Foods and Tarry Wine Merchants in Port Chester. (WE)
The Times critics name their three favorite bargains of the year. (The online article has dropped the names of a couple, but I have deduced that Emily’s number three is Tavern at Croton Landing and Alice’s number one is The Cookery in Dobbs The addresses are at the bottom of the piece.) (NYT)
Brunches in Westchester. (WM)
Adam heads to Aires de Colombia in White Plains and finds a very nice arepa. (AC)
Dara makes a slow-cooker brisket. (CITK)
Has Hito Asian Bistro moved to Mamaroneck Avenue in WP? (CH)
Has the former (original) owner of Strega purchased the former Woody’s on Main space in Mount Kisco? (CH)
Recommendations for good Chinese in Westhester. (CH)
Amuse Bouches from WM.
Dining solo in Westchester. (WM)