People are reading
You are at:Home»Restaurants»Turkois in Airmont: A Lunchtime Bargain

Over the course of several lunchtime visits this December, I’ve fallen unabashedly in love with Turkois, the wonderful seven year-old Turkish restaurant tucked into a little strip mall in Airmont.  I know I’m not Turkois’s first admirer–this restaurant has many loyal fans (like my friend Susan, who introduced me to Turkois).  Still, Turkois deserves to be better-known than it is for its excellent food and warm hospitality.

Here’s the entrance area to the restaurant. 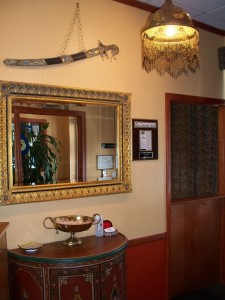 Unfortunately, Turkois and I have a long-distance love affair.  Perched on the border between Rockland County and New Jersey, Turkois is a forty-minute drive from my town in Northern Westchester.  But the $12.95 lunch special is worth the trip.

After you’re seated, your waitress will bring you a basket of warm Turkish bread, served with a plate of olive oil studded with zatar, a blend of oregano, toasted sesame seeds and other spices. 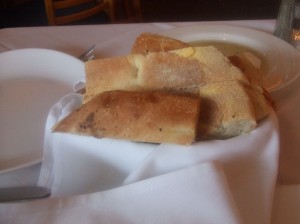 Then choose between the Young Bride’s Soup, a warm puree of red lentils, tomato, onion and peppers, or the Shepherd’s Salad. More after the jump… 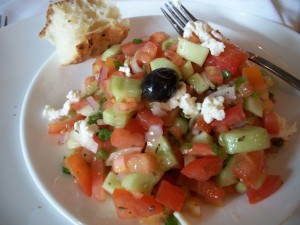 The salad is composed of cucumber and tomatoes tossed with olive oil, red onion and mint, and topped with Turkish feta, which has a light texture and a mild saltiness that really enhances the flavor of the vegetables.

For your second course, you can choose one of ten dips and appetizers, including stuffed grape leaves, tabbouleh, and baba ghanoush.  I plan to keep returning to Turkois to work my way through all ten selections. But for now I can wholeheartedly recommend the baba ghanoush, made with charred, roasted eggplant that gives it a seductively smoky taste, and the creamy hummus.  Here’s the hummus: 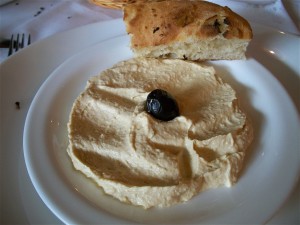 Assuming you have any room left (it’s hard not to fill up on that amazing bread), you’ll move on to your entree. Many of the eleven lunch entrees feature grilled meat of some sort, served with rice and bulgar, but there are several vegetarian choices, including mixed grilled vegetables and a spinach and rice dish served with yogurt.

Here is the Kuzu Sis, which is grilled cuts of lamb paired with grilled vegetables, rice and bulgur.  The lamb was flavorful but not as tender as I would have liked. The vegetables and the flavorful bulgar were terrific. 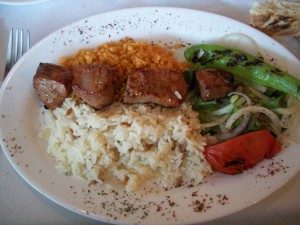 And this is the Izgara Kofta, grilled patties made from seasoned lamb and beef. 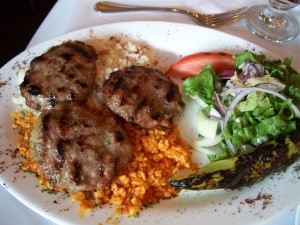 Those patties were succulent and tasty.  My husband cleaned his plate, but someone with a dainty appetite might have had enough leftovers for a light supper or tomorrow’s lunch.

I’ve saved my favorite entree for last–the Laharna Sarma, or stuffed cabbage, is surprisingly delicate.  Filled with ground meat and rice, and served with a creamy garlic yogurt on the side, this dish reminds me very much of Hungarian stuffed cabbage. 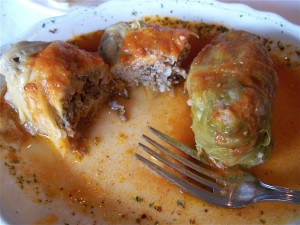 It’s like a delicious little history lesson on a plate–Hungarian cuisine absorbed many Turkish influences during Hungary’s years as part of the Ottoman Empire.

Dessert is not included in the prix fixe lunch (but soft drinks are).  Twist your companion’s arm to share a dessert with you, then order a Turkish coffee.  The rice pudding, served cold, is creamy and sweet, but perhaps a bit too heavy for midday.  We couldn’t finish ours. 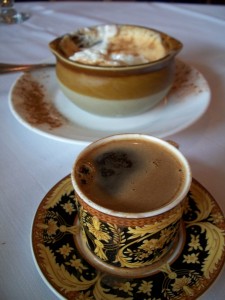 Opt for something light instead.  The Kayisi are jewel-bright dried apricots, marinated in a honey glaze and stuffed with morsels of chilled, dense buttermilk and peeled almonds. 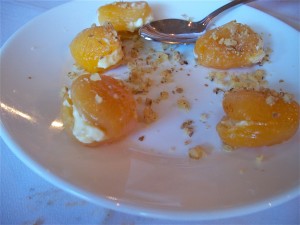 Each one-bite apricot is sweet and tangy, creamy and crunchy.  This dessert is simple and irresistible, and I can’t wait to have it the next time I’m at Turkois.

While lunch at Turkois is a bargain, dinner does feature many more choices, including fish entrees unavailable at lunch.  On Friday and Saturday night, there’s a live belly dancer to add to the ambiance. And tonight, New Year’s Eve, Turkois is offering an evening of Turkish and American music, with a belly dancer show, paired with a four course Turkish dinner with open bar.  Contact the restaurant for more information.

The 411 on Turkois is coming. Until then: