People are reading
You are at:Home»Food Links We Love»Believe in the Healing Power of Broth

Today in the food section, Linda Lombroso has a great story about all the different kinds of chicken soup from all sorts of cultures. Whether it’s Mexican (tortilla soup! my favorite!) or Greek avgolemono or Jewish Matzo Ball, everyone’s got their own version of Grandma’s penicillin. 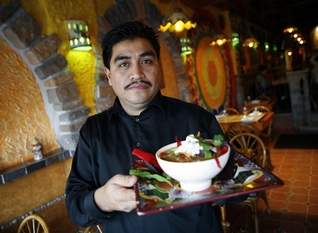 Above, Isidro Meza holds a bowl of Chicken Tortilla Soup at La Herradura in Mamaroneck. (Mark Vergari/The Journal News). Below, matzo ball soup at Epsteins of Hartsdale and Thai Coconut Chicken Soup, made by Abigail Kirsch. 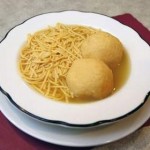 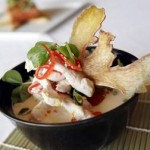 After the jump, Linda’s story — with recipes for Ladle of Love’s Chicken Noodle Soup, Abigail Kirsch’s Thai Coconut Chicken Soup and two recipes from “The Best Soups in the World,” by Clifford A. Wright: Korean Chicken & Rice Soup and Chayote Soup.

In broth we trust
No matter what culture you’re from, there’s a chicken soup to cure what ails you

For a guy fighting off a cold, Robert DeGroat couldn’t be in a better place.

As the owner of Epsteins of Hartsdale, a kosher deli on Central Avenue, DeGroat has unlimited access to the remedy known as Jewish penicillin: chicken soup. 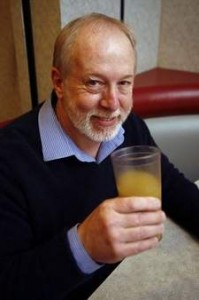 DeGroat, who’s been drinking the warm broth in a soda glass — minus the matzo balls and noodles — says many customers come in asking for chicken soup on the advice of their physicians.

There’s a scientific reason chicken soup may be just what the doctor ordered.

In a 1993 study of its medicinal qualities, University of Nebraska researcher Dr. Stephen Rennard put his wife’s matzo-ball soup through extensive laboratory tests. The results, published in a 2000 edition of the medical journal CHEST, found that chicken soup has anti-inflammatory properties that can ease the symptoms of upper-respiratory infections.

But it’s not just homemade chicken soup that does the trick (Rennard and his colleagues tested commercial soups as well). And there are plenty of international options: Different versions of chicken soup appear on the menus at Korean, Greek, Italian, Thai, Mexican and Italian restaurants throughout the Lower Hudson Valley.

And at Lefteris Gyro, a Greek restaurant in Tarrytown and Mount Kisco, there’s avgolemono, a chicken-egg-lemon soup served with rice. Owner Chris Grammatis, who lives in Tarrytown, says he grew up eating the soup on the Greek island of Lesbos, where his grandmother made it for him when he was sick — “definitely every time I had a cold.”

Chicken soup is absolutely a multicultural phenomenon, says food writer and cooking instructor Clifford A. Wright, author of “The Best Soups in the World” (Wiley, $22.95). But not every concoction made with chicken stock counts as a true chicken soup.

“For me, a chicken soup is not just chicken broth, but it has pieces of chicken in it, and that has to be the prime ingredient,” says Wright, who lives in Santa Monica, Calif. “That being said, you’ve got a thousand of them.”

International varieties featured in Wright’s book include a Colombian chicken soup (ajiaco bogotano), a Nicaraguan variety made with chayotes, a Kurdish chicken and yogurt soup, the Anglo-Indian mulligatawny and good old-fashioned American chicken soup made with homemade noodles.

“If you think, ‘Why would I want to make that? I can buy it in a can,’ well, there’s no comparison,” says Wright, who spent a year preparing a different soup each day. “The homemade version is just incredible.”

The homemade touch is critical to the success of the chicken noodle soup at Ladle of Love in Mount Kisco, says Leslie Lampert, owner of the soup and gourmet shop.

In order to prevent bitterness, the soup is simmered for hours but never boiled, she says, with frequent skimming of impurities that rise to the surface.

The chicken tortilla soup served at La Herradura, a Mexican restaurant with two locations in New Rochelle and one in Mamaroneck, also requires careful attention to detail. “It’s been a very traditional soup in Mexico for a long, long time,” says Isidro Meza, who runs the restaurants with his two brothers.

The soup, cooked with onions, cilantro, red and green peppers, garlic and pieces of corn tortillas, is blended, cooked further and served in a bowl with chicken, shredded Oaxaca cheese, avocado and strips of tortillas, and topped with fresh cilantro and a dollop of sour cream.

At Epsteins of Hartsdale, owner DeGroat says the chicken soup is so popular, they prepare tremendous quantities using whole chickens and 30 pounds of chicken bones (washed three times to purify them), along with parsnips, onions, dill, celery, carrots, garlic, salt and pepper. Matzo balls are hand-rolled and boiled, then served in the strained broth floating alongside noodles.

“Most of the trick with soup, with any kind of cooking, is technique,” says DeGroat, who kept the staff and all of the restaurant’s original recipes when he took over a year and a half ago. “You can have all the ingredients in the world, but you need the technique.” 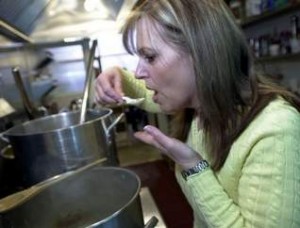 As for the curative powers of chicken soup, Ladle of Love’s Lampert is confident they exist: Last week, when she was home with the flu, she went through two quarts of it.

Chicken soup is not only good to eat, she says, it’s good to inhale.

“To me, it’s all about the feeling of having your grandmother making you better, taking care of you,” Lampert says. “It’s like a grandmother in a bowl.”

What if grandma isn’t a natural cook?

DeGroat says his mother, who is Jewish, occasionally made chicken soup when he was growing up in Stony Point. But somehow her soup pales in comparison to the one served at Epsteins — and he’s sure she won’t mind if he tells the world.

“It’s not as good,” he says, taking a sip of broth from his soda glass.

Begin making this soup the day before you want to serve it.

Place onion, carrot, celery, parsnip, dill, parsley and thyme in a stock pot and cover with chicken parts (this holds down the aromatics while cooking). Add water to just cover chicken. Add peppercorns. Bring just to a boil and quickly reduce heat to a bare simmer, being careful not to boil stock (hard agitation creates a bitter stock). Simmer until the chicken is tender, about 2 1/2 hours, skimming off impurities every 20 minutes. Add salt to taste.

Strain soup through a fine-mesh strainer, reserving carrots and chicken. Season with salt and freshly-ground pepper. Chill overnight, then skim layer of fat. Slice carrots and shred chicken and place back into stock. Add noodles. Reheat, re-seasoning as desired.

From “The Best Soups in the World,” by Clifford A. Wright

In a small cast-iron skillet, toast the sesame seeds over medium-high heat without any fat, shaking the skillet often until the seeds are lightly browned, about 1 minute. Transfer to a small bowl and set aside.

In a large pot, add the chicken broth, garlic and ginger and bring to a boil over high heat. Add the rice, reduce the heat to medium-low, and simmer until the rice is tender, about 12 minutes. Stir in the soy sauce and sesame oil. Add the chile paste and stir to blend. Add the shredded chicken and as soon as it is heated, ladle the soup into bowls and garnish with the scallions and reserved sesame seeds.

This recipe, from Abigail Kirsch, appeared in The Journal News in October 2005.

Turn off the heat, cover the pan; allow broth to steep for 30 minutes.

Strain the broth into a clean pan, discard solids. The broth may be refrigerated, at this time, up to 3 days.

Slice the chicken crosswise into 3-inch strips; cut these strips in half lengthwise. All strips should be about the same size so that they cook evenly.

Reheat broth over medium heat until it begins to simmer; do not boil. Add chicken; gently poach until the meat is just cooked, about 5 to 10 minutes.

Stir in lime juice, season with salt to taste. Divide soup into warm bowls and garnish each with cilantro, pea sprouts and ginger. Serve piping hot.

To fry ginger: Peel and slice ginger vertically into 1/2-inch pieces. Cover with cold water and chill overnight in fridge. Drain and dry ginger pieces well. Place oil in a small skillet and heat until 350 degrees. Fry ginger for 30 seconds and drain.

This soup comes from Nicaragua, and is included in “The Best Soups in the World,” by Clifford A. Wright.

2 large chayotes (about 1 1/4 pounds), peeled and sliced 1/4-inch thick. If chayotes are not available, substitute zucchini

Bring a large pot of salted water to a boil over high heat, then reduce the heat to low and simmer the chayotes until tender, about 20 minutes. Transfer the chayotes to a blender and blend, using about 1 cup of the cooking water so the blades turn well, until a smooth puree is formed.