Good afternoon and happy Tuesday. I’ve been caught up with writing for tomorrow’s paper, so I’m only now getting to the blog and this week’s Local Links. My apologies!

First, thanks again for all your get-well wishes. I can’t believe how many people emailed and commented — and you all seemed genuinely worried. I appreciate it! I am finally feeling better, and though I’m still coughing a little, I have enough energy to get out and about at least. I can’t believe how truly debilitating the flu can be! I got sick on Dec. 29 (I blame someone who was coughing on me during the first showing of Sherlock Holmes on Dec. 26 at the Palisades Center! Fess up, loser!), and I didn’t feel truly better until yesterday. That’s almost a month. So I’m sure glad it’s on its way to being over.

Now let’s get to this weekend’s food adventures (and there were many). Friday, my husband and I had our Iron Pizza Chef Battle. (Previous Iron Pizza Chef battle posts here.) If you’ve been following along, you know that I always switch up my ingredients depending on my mood, and my husband always — always — prepares a pepperoni and green olive pizza. Friday was no different. 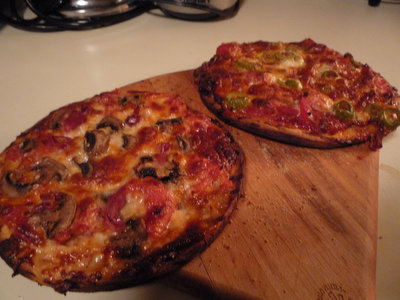 Mine, with mushrooms and speck from La Quercia, is on the right. Greg’s is on the left. C’mon, I win, right?

On Saturday, I was reporting on the Sausage & Beer Master Class at Blue Hill at Stone Barns. This is part of the story that’s coming out in tomorrow’s paper, advancing the fifth annual Sausage & Beer Dinner at Blue Hill at Stone Barns. Adam Kaye, chef and kitchen director at Blue Hill, led the class, teaching us all about the history and culture of sausage-making, and then giving us hands-on lessons on how to make red wine and sage sausage and a lamb merguez.

Here’s Adam, having just put the meat in the canister to go into the stuffer: 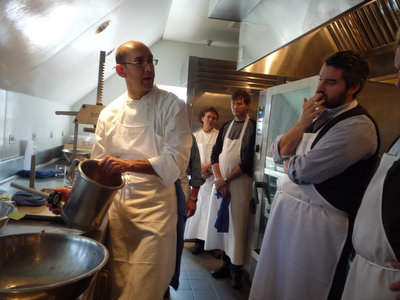 Red wine and sage sausage that the class made: 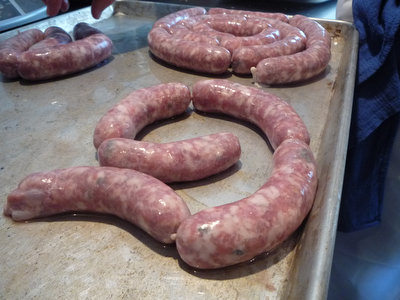 Afterward, the class headed over to Captain Lawrence Brewing Company in Pleasantville. 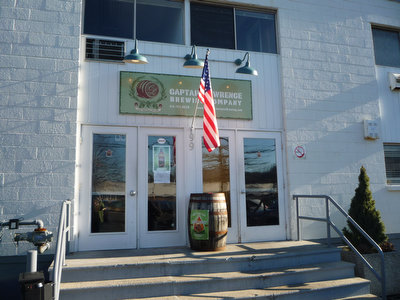 It was a busy Saturday, with people filling up their growlers and tasting samples in the Tap Room: 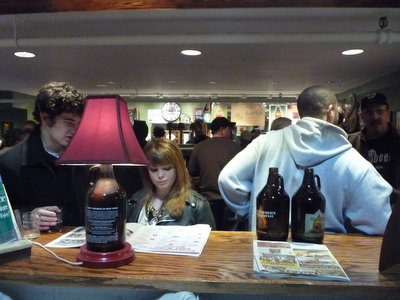 Scott Vaccaro, owner and brewmaster, led us through how you make different styles of beer, and we got to sample some, too: 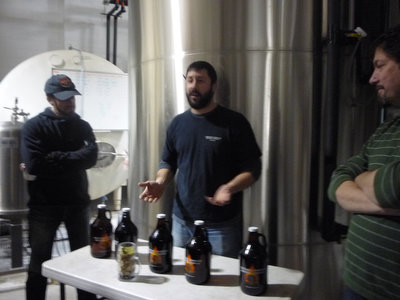 It was a blast and I learned a lot, both about sausage and beer. It will make attending the dinner on Sunday that much more interesting.

I didn’t feel much like cooking after that, so we headed out for dinner on Saturday night. Wasabi in Nyack was absolutely packed. Recession? What recession? 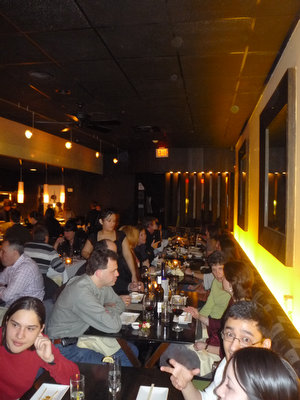 We tried many things, including white abalone and scallop: 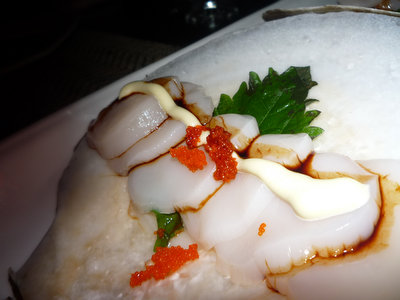 Here’s me, finally out of the house: 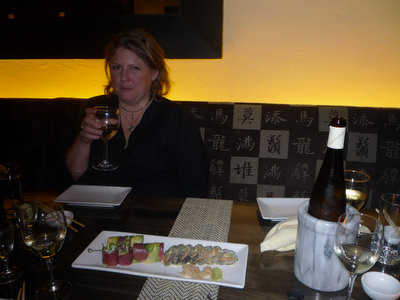 (I kind of look like I’m still sleeping, huh?)

On Sunday evening, I attended an amazing and eye-opening dinner at Blue Hill at Stone Barns. Chef Angél Leon, who is known as Spain’s chef of the sea, prepared a special ‘Mar y Tierra’ (Sea and Earth) seven-course dinner.

He’s doing many creative and innovative things there, some of which he demonstrated at the French Culinary Institute the week before. Check out Anne McBride’s excellent blog post to learn about those: cooking over olive pit-charcoal; using micro-algae to clarify stock; how he uses photosynthesis to raise plankton.

I learned many facts at the dinner: that Angel has witnessed big fishing boats throw out 80 percent of their catch because it wasn’t the big “name” fish like tuna and salmon; that he works with fishermen to cook delicious food with the “ugly” fish that no one knows even their names; that there’s a sustainable fish farm called Veta La Palma that might be an answer to the way we raise fish in the future; and that he tried to collect plankton from the water before finally learning how to grow it himself. Thinking about how our fish supply is seriously in trouble made me feel kind of bad for having sushi for dinner the night before.

This was one of the courses at the dinner: Oysters Under the Sea.

It was an oyster served on top of plankton with a sticky citrus foam. Chef Angel said he hoped that while we were eating it, we could imagine ourselves swimming under the sea — and you could. Its essence was briny, but bold from the plankton, which was both dark and bright green at the same time. 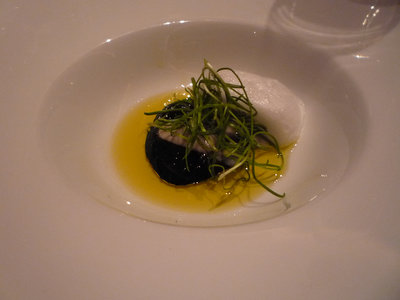 There were other courses: all of them incredible. Perfect scallops, served with rutabega and parsnips from Stone Barns Farm; Cod with smoked soup; and lubina from Veta La Palma, served with a clear consomme of Moroccan flavors and with two perfect gnocchi so beautifully shaped I thought they were cannellini beans.

But the dish that really took my breath away was caviar (from American paddlefish) served over an Iberian consomme with the most heavenly egg yolk in the middle. 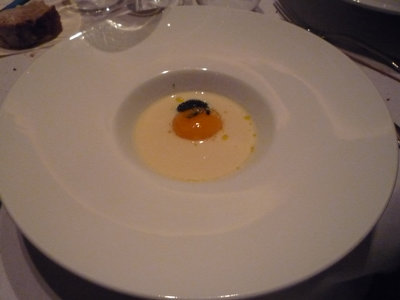 The broth was rich and porky (there was speck blended in) and the caviar was a bright pop. We were joking that it was like the best breakfast sandwich you ever had. It was a combination of everything chef Angel found at the farm and what he knew from back home: a surf and turf, he called it.

Indeed, the menu that chef Angel originally sent over from Spain had to be completely rewritten once he arrived at Blue Hill at Stone Barns. Dan gave him a tour of the farm and he was so utterly overwhelmed by its abundance and freshness that he had to rest, think and rewrite. He came up with something that took real advantage of the farm, including dessert. He said he tasted one of the carrots straight from the ground and it was the sweetest carrot he’d ever had in his life. So he used it (with oranges) to make a sorbet. 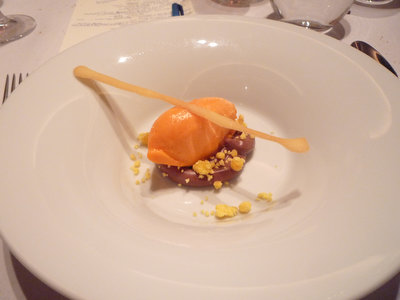 The other parts of the dish he used because they are two of his favorite foods: chocolate and vodka.

MH goes to Sazan in Ardsley. (NYT)
MH also profiles Neveah in Pleasantville. (NYT)
12 Great Pubs. (WM)
20 Fabulous New Restaurants. (WM)
Where to dine on Valentine’s Day. (WM)
Julia reports on Fairway. (WME)
David and Marge give SolMar in Tarrytown mixed marks. (WM)
A recipe from Lisa Graziano of the Fish Cellar for Broiled Cod with Mushroom Ragu. (WM)
Dara visits Rain Water Grill in Hastings. (CITK)
Doug goes to Horsefeathers in Tarrytown for the burger. (HT)
Doug lays out the hits and misses on the pulled pork sandwich at Barnacle BBQ in Mamaroneck. (HT)
Martha has photos of the winter activity on her farm in Bedford. (TMB)
Lauren Groveman posts photos from her recent birthday trip to Barcelona. (LG)
Clarification on the two Ruis of Oporto, Duoro and Elia Taverna. (CH)
2 Broadway in Pleasantville is closed. (CH)