People are reading
You are at:Home»Food Links We Love»Great Seafood Shops in the Lower Hudson Valley

Tomorrow is Ash Wednesday, and that means a lot of people are going to be buying fish on Fridays for the next 40 days. So here’s a look where to buy fish in Rockland, Westchester and Putnam. Longtime Small Bites fans may have  seen this list before, but I’ve called each place to update for this year. (And, sadly, I had to remove Ebb Tide from the list, after it closed earlier this year.) Judith Hausman and Deven and Jill Black contributed to the original article, and some of their prose and reporting is included below.

Apple Farm
37 Tarrytown Road, White Plains. 914-288-9521.
At Apple Farm, shoppers walk through the bustle, around the piles of fruit and vegetables, past the Italian deli case and on to the rows of whole fish on ice. Just take a plastic pan and help yourself; the multilingual fishmongers will weigh the fish for you. Fish is about 20 percent of Apple’s business all year. “We bring in fresh fish everyday,” says manager Jay Suh. The blue crabs, mullet, eels and whiting are labeled in English, but they’ll go into Korean dishes, Latino dinners and Italian specialties for all kinds of holidays. 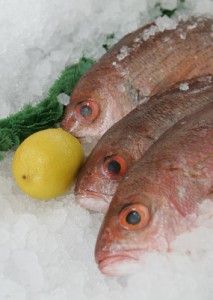 Not long after the fishmonger’s shop opened in 1978, customers started asking for prepared meals, with as many as 250 orders coming in every Friday during Lent. Eventually the owners opened Gilligan’s, which has grown into a full-service, 150-seat seafood restaurant that shares the same piece of Pomona real estate.
The two establishments are so intertwined – you can get anything from Gilligan’s menu as takeout from the fish market -that C&M manager Vito Russo can’t say how much fish the store sells because they don’t separate retail from restaurant sales. The most popular item, on either the raw or the cooked side of the business, is flounder fillet. 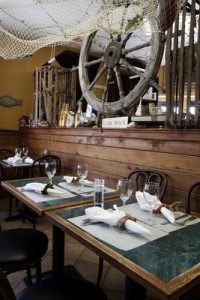 Conte’s Fishmarket is hard to miss with its brightly painted exterior on corner on Route 117. The fish case is in the back of a 36-seat restaurant, which is decked out with nautical decor: nets, cork floaters, carved fish and other paraphernalia. Owner Rob Conte can tell you what you need to know about the skate, tuna and monkfish waiting there on ice. “I ask them if they’re adventuresome and then recommend fish they may not have tried,” Conte says. He sells more cod, sole and shrimp during Lent, and the miso-glazed cod is among his most popular dishes. Right now, Nantucket bay scallops are in season, and Conte says to look for soft shell crabs and shad roe soon. New this winter: Wednesday nights the restaurant hosts “Lobster Lunacy,” a special where you can get two 1-pound lobsters and Maine steamers for $34.95 per person. The restaurant used to be cash-only and BYO; you can now use Visa or MasterCard and they sell beer and wine. (But you can still bring your own if you wish.) (Interior of Conte’s, above. Mark Vergari/TJN)

Daido
522 Mamaroneck Avenue White Plains. 914-683-6735.
A Japanese grocery with imported dry goods such as nori, kombu and many different misos. But the crown jewel of the market is the fish display: Sushi-grade tuna and salmon, octopus and squid, shrimp and plenty more, all packaged neatly in plastic and Styrofoam. Plus, the take-out sushi near the front of the store is a favorite lunch for locals.

Eastchester Fish Gourmet
837 White Plains Road, Eastchester. 914-725-3450, www.eastchesterfish.com
Rick Ross has been bringing fresh fish to lower Westchester for nearly 30 years. He started out as a buyer for Windows on the World and was a director of purchasing for the Hyatt Corporation before opening his shop in 1981. Between the retail shop and the restaurant two doors down, he’s built a business that moves 5,000 pounds of fish a week. During Lent, he notices people scooping up a lot of scrod and flounder fillets – “because that’s what they grew up with” – but he offers between 25 and 30 other varieties. Nantucket Bay scallops are very popular this year. People buy a lot more prepared foods these days; at least half his sales are such daily-prepared dishes as Chilean Sea Bass with fresh tomatoes and herbs or parmesan-crusted cod. He’s also offering a Weight Watcher’s entree and Weight Watcher’s potato. In the restaurant, he has two special nights: On Thursdays, clams, oysters and shrimp are $1 each; and on Monday nights you can get a 1 1/2-pound lobster for $26.95. 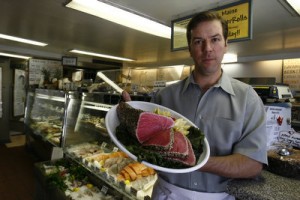 “People are eating fish because it’s healthy, interesting and tasty,” he says. “If they have questions I guide them to meet their needs.” His prepared seafood dishes, such as lobster cakes, shrimp over angel hair pasta and chowders, sell well too. They are all made from scratch, with attention to salt, fat, and calories.

(Joe DiMauro, above left. TJN file photo)
Mount Kisco Seafood is a full-service market, selling artisan bread, local produce, beef, cheeses, sweets — and about 40 varieties of fish. You can also eat its seafood at The Fish Cellar restaurant on the other side of town – both are owned by Joe DiMauro. The most popular fish during Lent, he says, are flounder, cod and salmon.But, he says, “a  lot of people have to eat fish every Friday, so we try to make it easy on them — prepare things they don’t normally come in for: stuffed sole, prepared shrimp scampi dishes, a different prepared meal every day.
The shop also recently added a sushi bar, which has become especially popular for takeout lunch. DiMauro’s favorite rolls? The nigiri combo, the Red dragon and the Dancing Dragon. And here’s a bonus: Mount Kisco Seafood carries some of the best artisanal bread around: Wave Hill, from Wilton, Conn. 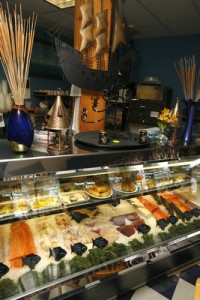 Rick’s Seafood has 13 tables alongside its fish case, so at night, the cozy shop turns into a restaurant, too. (They sell wine and beer, but you may also BYO, and there’s
no corkage fee.) Owner Rick Megna has hired a new chef who is well-versed in Italian cooking, so you’ll find prepared foods to-go and a menu full of specialties such as eggplant rollatine, risotto, and antipasti such as fresh mozzarella and marinated mushrooms. During Lent, the most popular items include lemon sole, organic salmon, sea scallops and homemade quiches. (The display case at Rick’s, right. TJN file photo)

Rockland Seafood
110 Route 304, Bardonia. 845-624-3660.
You can judge a fish market without stepping all the way inside. Just poke your nose in the door. If you get a whiff of fish, turn and flee. The first thing you’ll notice about Rockland Seafood is how clean it smells. Even on a frigid winter night just before closing, the aroma is as sweet and fresh as sheets dried in spring sunshine, a sure sign that fish is top-of-the-line fresh. The shop boasts of supplying some of Rockland and Westchester’s top restaurants and most demanding chefs, and owners Tom DeCelestino and Brian Smith sell the same fish and seafood for home cooks. 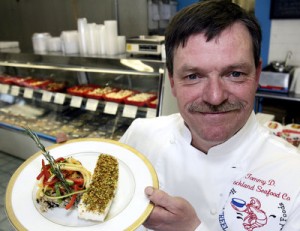 They also offer cooked-to-order entrees, soups, sandwiches, wraps and fried dinners or microwave-ready meals. New to the line-up is Branzino from Greece, but cod and flounder and lemon sole are still big sellers, says manager Josh Rosen. Most popular item: fillet of sole; they sell some 400 pounds a week.

Turco’s
380 Downing Dr., Yorktown Heights. 914-243-9100, www.turcos.com
Let’s talk numbers: 40 different types of fish, 45 feet of display case (plus another 12 feet behind for shellfish), a 12-foot freezer and 1,000 pounds of water for the fresh lobsters. And that’s not counting the 50 to 60 prepared items (stuffed shrimp, linguine with clam sauce, clam chowder), which are made from scratch down to the sauce: dill sauce, cocktail sauce, tartar sauce. The list goes on. (They even house-cure salmon to make lox, says manager Charlie Crosby.)
The white fish are popular these days: tilapia, salmon, bass, flounder and lemon sole.

Know of another great seafood shop? Share below in the comments field. I’ll try to include it in the roundup as I update it throughout Lent.