People are reading
You are at:Home»Restaurants»Valentine’s Day Dinner at La Panetiere

Hi, it’s Katherine Curry, guest blogger, with some pictures from the Valentine’s Day dinner my husband and I enjoyed at La Panetiere.

Our reservation was in the early evening, and when we arrived, the dining room had just a few other guests. But by the time we were tucking into our appetizers, the room was bustling with happy couples of all sorts.  It was a convivial Valentine’s Day dinner, with diners at adjacent tables conversing and laughing.

Our meal began with an amuse bouche, a short glass of creamy winter veloute made with celery root and pear. 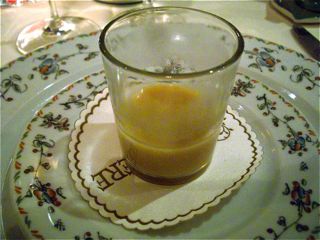 Our waiter brought us a luscious creme brulee of foie gras, served with brioche toast. 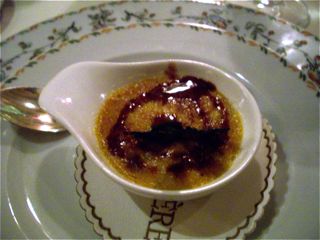 Next up was something called a “terra-marea” mosiac, which was thinly-sliced raw beef, tuna, salmon and another fish that I’ve forgotten.  Everything was impeccably fresh and beautifully presented — that kind of sums of La Panetiere, too.  Every detail is done right here — see how lovely the serving plates are? 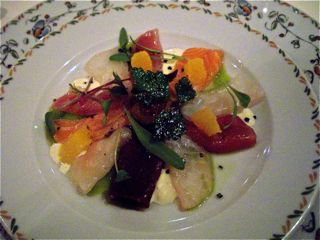 This dish was called a “rosace”, so it was shaped like a rose bloom — thinly-sliced sea scallops on top of mushrooms duxelles with spinach and tomato. 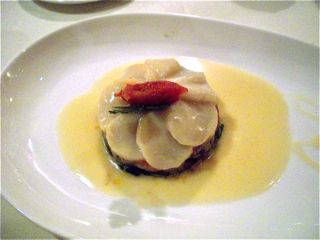 My husband’s main course was two beef short ribs, tender and flavorful, served with potato croquettes and a little salad. You can see that my food pictures didn’t turn out very well — the lighting, as one would hope, was soft and romantic.  The short ribs don’t look so great, but trust me, they were. 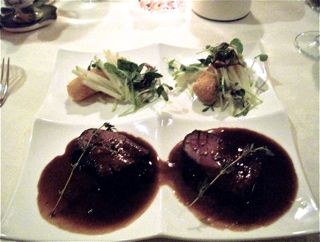 I ordered off the regular menu for my entree — as did one or two other diners near me — because I simply can’t come to La Panetiere and not eat Dover sole. Typically the sole is expertly-boned tableside, but tonight it was prepared in the kitchen. 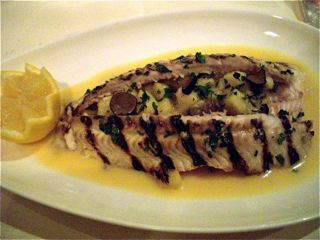 The sole is served with a ridiculously rich hash of potatoes with black truffles and buerre blanc sauce. If I had to request a last meal, it might be a double-order of that hash, with extra butter sauce.

The fish is listed on the menu as being grilled.  The last time I was at La Panetiere, in October, I thought the sole was sauteed — in butter, naturellement!  My grilled fish was moist and tasty, but given a choice, I’ll take sauteed-in-butter every time.

The Valentine’s dessert trio was a gratin of raspberries, passion fruit ice cream, and a chocolate ganache Napoleon, which was pretty much a rich brownie with a French accent. 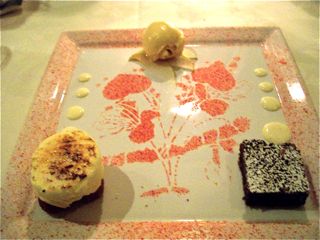 And back at the beginning of dinner, we placed our order for a Grand Marnier souffle.  Light, sweet, crispy, creamy — a heavenly dessert! 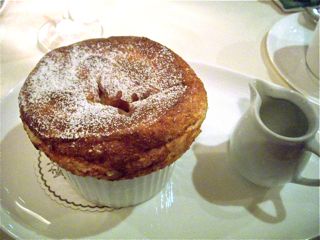 I probably don’t need to eat again until next Valentine’s Day.