People are reading
You are at:Home»Food Links We Love»Holy Smoke in Mahopac

Hi, everyone — it’s Katherine Curry again.  I had lunch today at Holy Smoke in Mahopac, just across the Westchester border into Putnam County.  Lunch was several hours ago, but I still smell faintly of smoke.  If it were socially acceptable to smell like this all the time, I would: I smell delicious!  When you walk into Holy Smoke, one whiff tells you that you are in a place that knows how to barbecue — an enticing wood-smoke aroma hangs in the air. 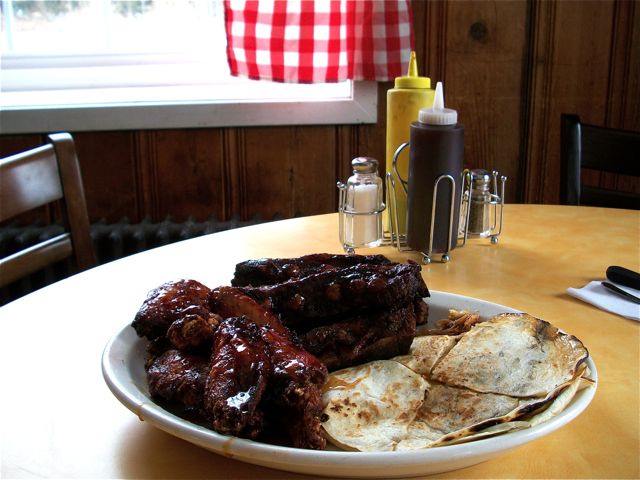 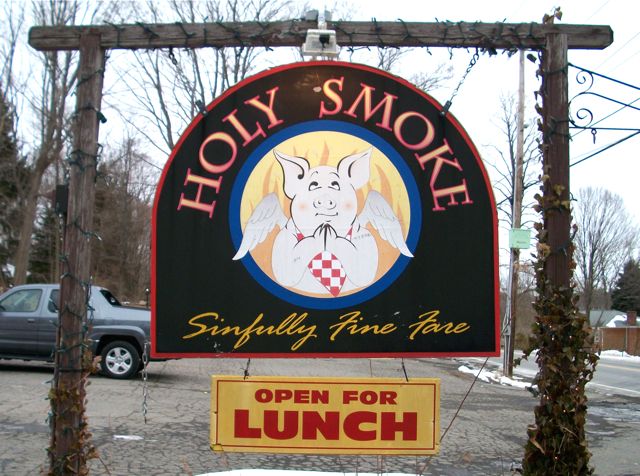 Lots more pictures after the jump. 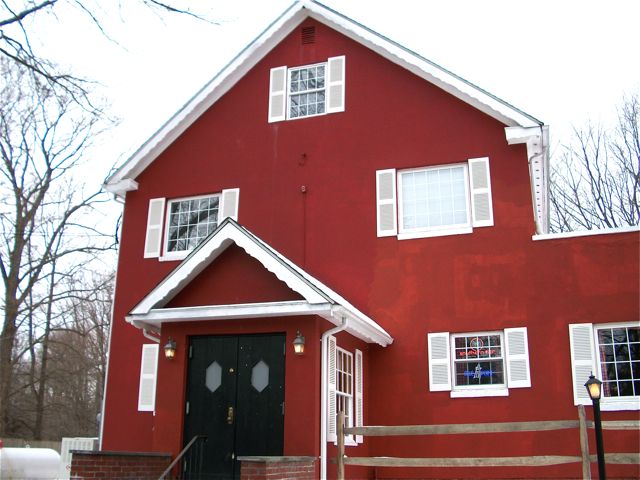 The bar area is the first thing you see when you walk in.  On tap at any given time are at least two dozen beers — the selection changes daily. Today, among the offerings were Sierra Nevada Brown Ale, Liberty Ale, Doc’s Black Current Cider, and Dogfish Head Pangaea. 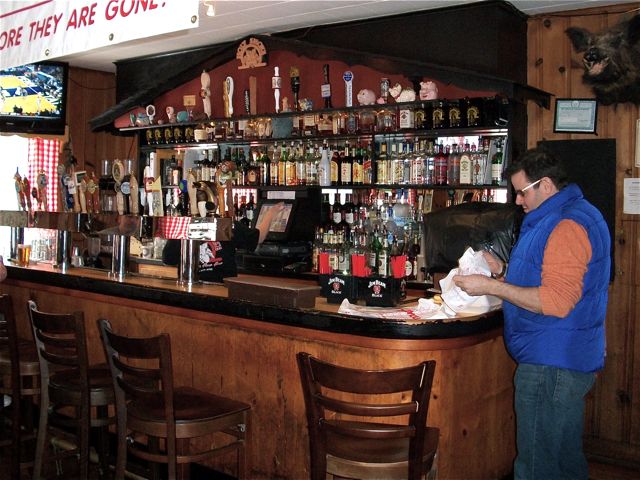 Holy Smoke hosts a number of special beer evenings throughout the year, many of which sell out quickly.  Coming up May 15th is a Dogfish Head Night, with the folks from Dogfish Head coming in and a bunch of great beers on tap.  For a complete list of events, visit the Holy Smoke website.

On this sleety, slushy, snowy afternoon, my friend and I had the whole place to ourselves. The dining room is bright, cozy, and simple, with light wood paneling on the walls and gingham curtains at the windows. 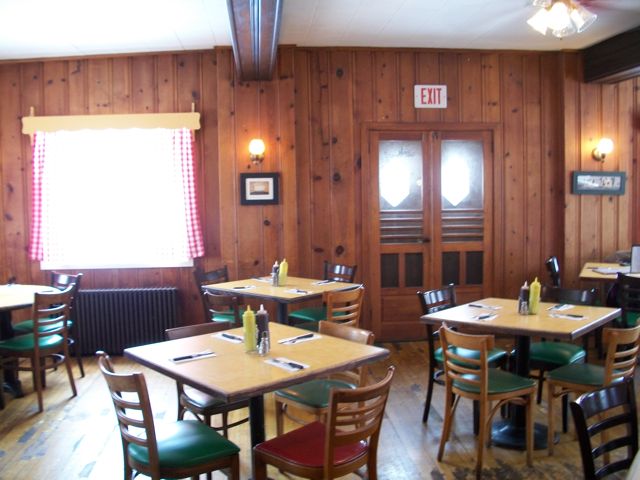 The first time I visited Holy Smoke a few weeks ago, my friend and I shared the combo platter from the starters menu.  You can select any three full-size appetizers for $21.25 — a perfect way to sample the BBQ wings, the “trash rib teasers” (essentially rib tips), and pulled pork quesadilla.

Pardon me if I gush about these wings. 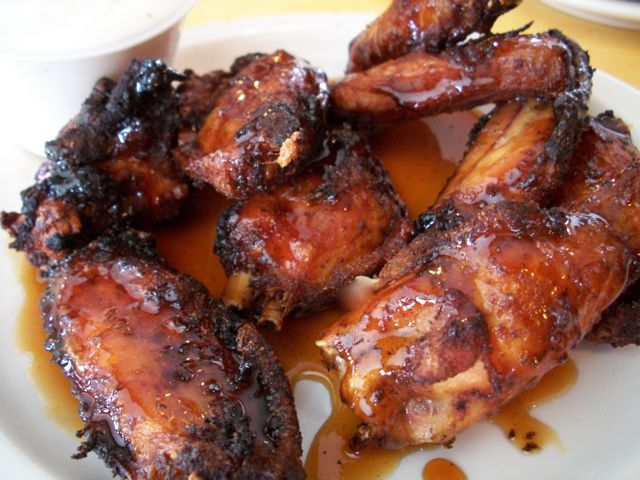 They are meaty and ample without being alarmingly oversized — some wings these days seem like they came from freakishly giant chickens, which in fact they probably did.  At any rate, Holy Smoke’s wings have a wonderfuly crisp skin with a little char, an assertively smoky flavor, and the bbq sauce is sweet with a wee bit of a kick.

There was nothing really wrong with the pulled pork quesadilla. It was stuffed with jack cheese and carmelized onions, but the pulled pork didn’t have as much flavor or plush texture as I would have hoped. 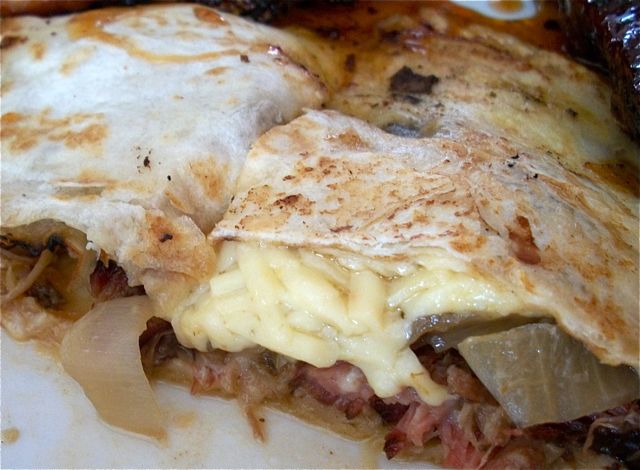 Here’s one of those rib tips — like the wings, the ribs are beautifully smoked, carmelized and charred on the outside, tender on the inside. 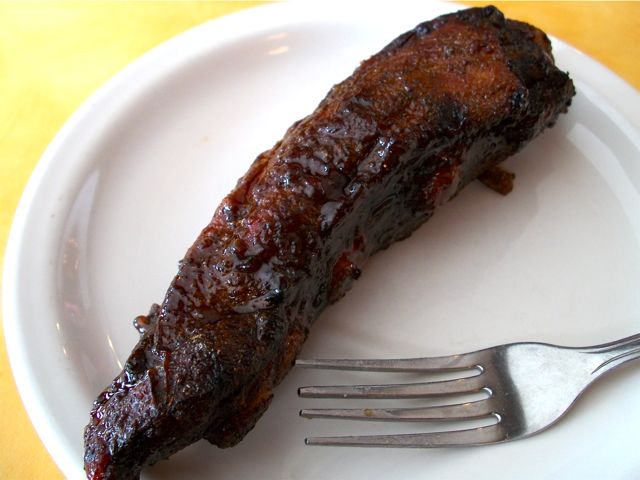 Today I tried to focus on the sides at Holy Smoke.  I ordered a half-rack of ribs, which came with two sides.  We chose the garlic smashed potatoes and creamed spinach.

I’ll spare you a close-up of the creamed spinach, since I’m not sure it’s possible to photograph even the most delicious creamed spinach without it looking like something the cat threw up.  This spinach was creamed, for sure, with a luscious texture and good flavor.  The garlic smashed were pretty tasty, too. 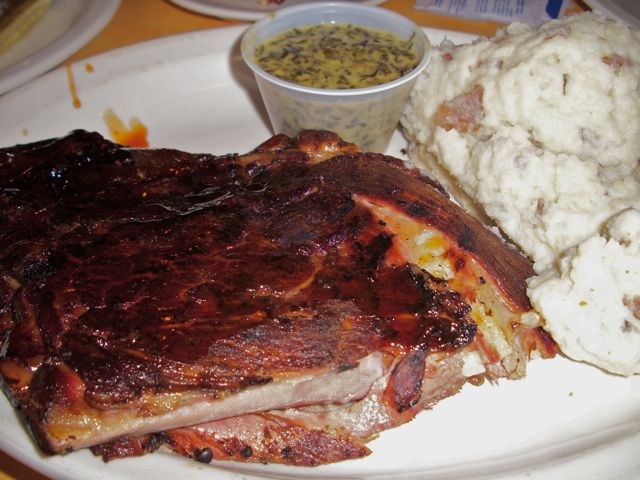 The other entree we sampled was the homemade chorizo sausage.  While the texture was a little dry, the sausage really packed a flavor whallop — spicy, hot, meaty. The sausages came with carmelized onions atop a hefty roll, which was fine but superfluous. When you’re dealing with this much meat, who has time for bread? 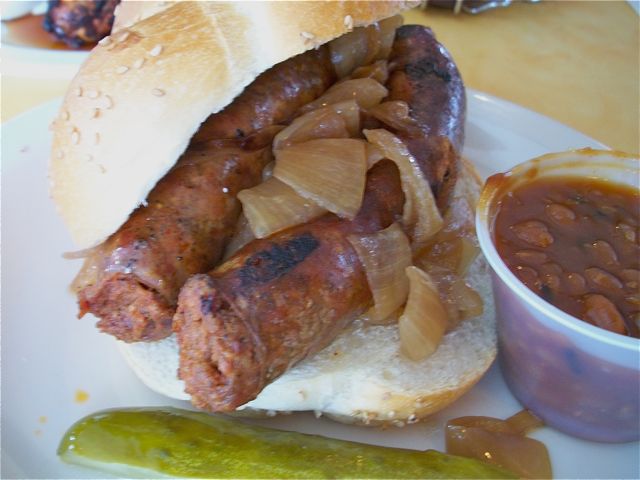 We chose baked beans as our side with the chorizo. I didn’t get a close-up of the beans, but they were more sweet than smokey, with a molasses tang and a hint of something herby, I think maybe sage.

Phew! I don’t even know what’s on the dessert menu at Holy Smoke — one of these days I’m going to save up enough room to find out.  Or maybe I’ll ask this guy — he and a fellow wild boar oversee the action at the bar. 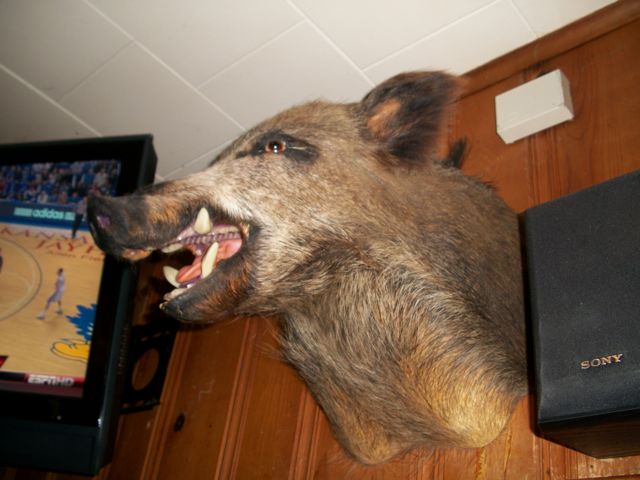