Hi everyone and happy Monday! What a weekend, huh? I went around Rockland Lake both Saturday and Sunday — some running, some speed walking — plus I got out on the garden to prune the blueberries and plant some lettuce. I can’t remember an earlier year I’ve been out planting!

We started the weekend out very well indeed on Friday night at the Tarry Lodge in Port Chester. 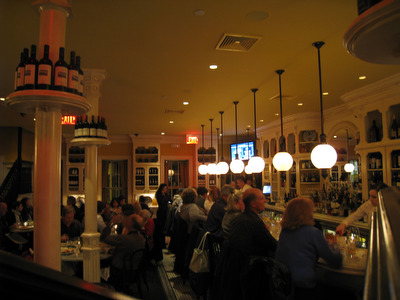 (BTW, Mario Batali is coming in April for a couple of dinners to pimp his new book; I’ll post the details on that this week). Here’s our first round of deliciousness. In the front, the clam pizza, in the back, the guiancale pizza with black truffles and egg. In the middle, a frisee salad with some of the best gorgonzola I remember eating: 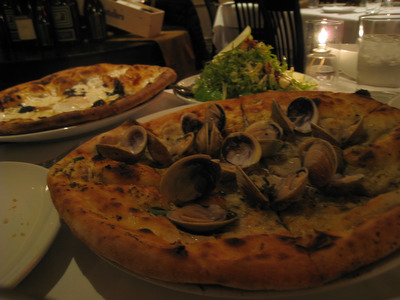 The second round of deliciousness. Clockwise from the front of the photo: orecchiette with suasage and broccoli rabe, the same salad (we wanted to keep nibbling), garganelli with mushrooms; the skate with puttanesca sauce; and roasted brussels sprouts with pancetta. 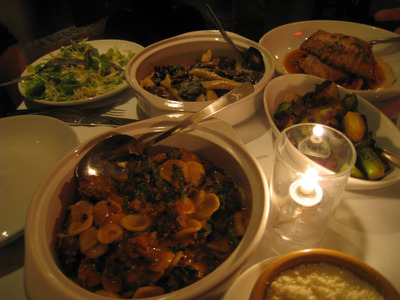 Holy hannah is that good stuff. We kind of made our own tasting menu by ordering all that food, so we took most of it home. I heated the pizza up in a 400 degree oven and it really held up well. I sent the rest home with my friend, and she reports that all of the food was terrific as leftovers, even the skate.

On Saturday night, we got the grill out. I know, it’s out of season. Please don’t call the grilling warden. Look at this, snow on one half of the garden, grilling on the other: 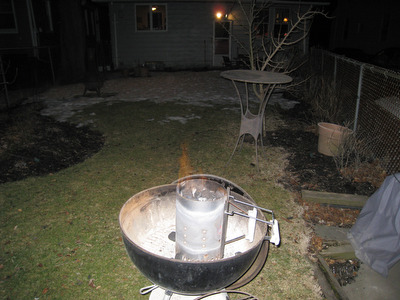 We had surf and turf — another all-local dinner, procured at the Palisades Farmers Market. Dines Farm Ribeye, Pura Vida Scallops, and baked potato and simple salad from Gajewski Farm: 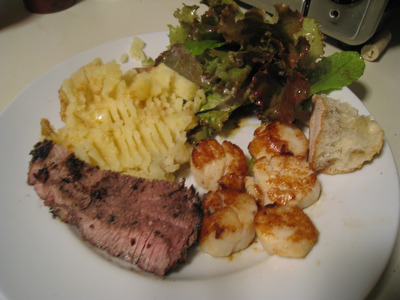 On Sunday — after the lake, the garden. Some longtime readers may remember that in 2007, I planted four blueberry bushes as foundation plants. Here’s the link to them in full bloom. To get fruit in June, you have to prune in March. Look at this overgrown Medusa: 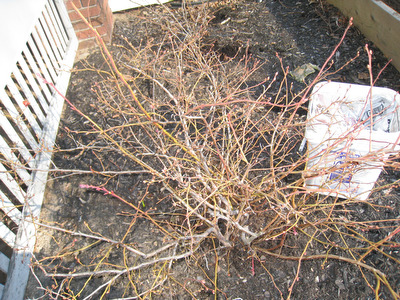 Ah look, she can breathe now! After its haircut, we gave it some Hollytone. Blueberries like acid. About a cup per every three feet of branch span. 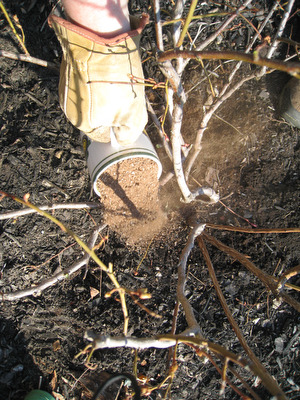 We also tended to some of our raised beds. Here’s my husband planting carrots. 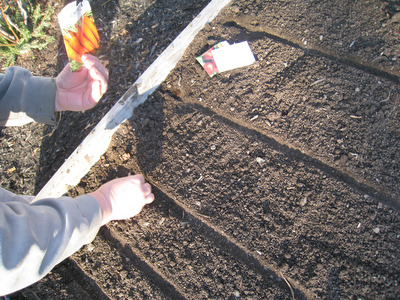 On Sunday evening, we went to a friend’s Oscar party. (She has satellite TV.) I made pigs in a blanket. I got fancy with them, slicing some of the dogs open and putting in some caramelized onion and some gruyere. I served them with tricked-up ketchup and roasted garlic mayo. Delishy. But the other food at the party was even better. 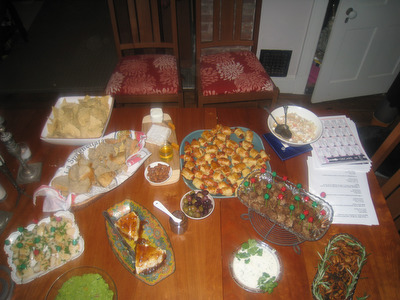 I can’t remember a year I did worse on my Oscar pool, so I was not the winner of the coveted prize of the party, a Mrs. Butterworth’s syrup jar dressed up Hollywood style: 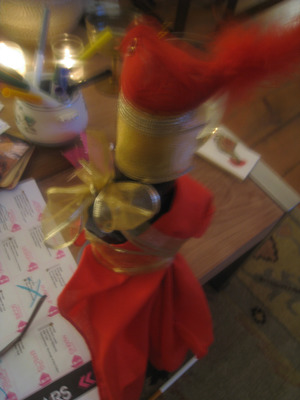 Where is the most authentic Irish soda bread in Southern Westchester? (CH)
A new spot in Hastings: Juniper. (CH)
Some very nice reports on Elia Taverna in Chester Heights. (CH)
Martha checks on her bees. (TMB)
Doug pays a visit to Chat for Westchester Magazine. (WE)
Freshly baked baguettes and hot sandwiches at Cicade Cafe in Ossining. (NYT)
Alice couches her “OK” rating of Limoncello with some nostalgia. (NYT)

I must have missed this coverage from a few weeks back: EDIT: Oops! Intrepid correspondent Katherine Curry had my back on these on this post here. Thanks Katherine!
Alice likes the simple food at Traditions 118, but finds the service very uneven. (NYT)
Pane and Gelato in Eastchester gets many of its ingredients flown in from Sicily. (NYT) (Those photos appear to be from Traditions 118, though.)
John Mariani loves Flames Steakhouse. (JMN)