Today in print, correspondent Katherine Curry has a great story on an Irish pub crawl in Pearl River. We focused mainly on the places that specialize in food, too, but I can think of a bunch of other great stops you might like to put on your list, not the least of which is the Pearl River Hotel. Love that bar.

Katherine recommends you start off with the full Irish breakfast at Gildea’s: 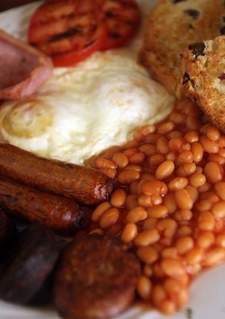 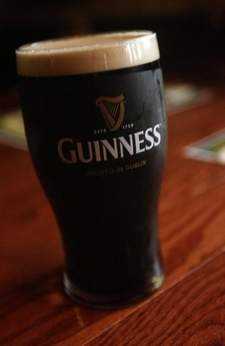 Then, after a few more pints (you’re not driving, right?), have a corned beef and cabbage at Murty’s: 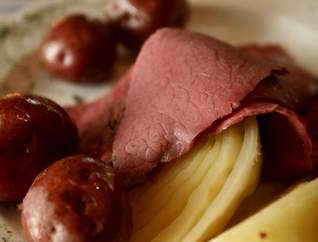 Here’s a link to her pub story. I’ll also post it in full after the jump.

We also have a wire story with some St. Patrick’s Day recipes using — what else? — BEER.
Recipes include Beer-Battered Fish & Chips, Murphy’s Irish Beer Stew, and Guinness Chocolate Cake. Yum. Here’s a link to the beer recipe story.

The other story in print is about our Hudson Valley Restaurant Week guest bloggers. But if you’re reading Small Bites, you already know all about that, right?

Katherine’s story, after the jump.

The comforts of Ireland, close to home
BY KATHERINE CURRY • FOR THE JOURNAL NEWS • MARCH 17, 2010

Visiting an Irish pub today? Consider the pubs of Pearl River, where you’ll feel like you’ve really gone to Ireland. Home to the state’s second-largest St. Patrick’s Day parade, the town has been an Irish stronghold for decades.

Start with a hearty Irish breakfast and a pint of Guinness at posh Gildea’s, near the top of Central Avenue. After that, it’s all downhill — literally — since Central Avenue slopes down the middle of town. We’re highlighting a selection of pubs with food, and they are listed in order so you can follow along as you stroll. And if you go on Sunday, when the town’s parade kicks off at 1:30 p.m., brace yourself for parking challenges, no kitchen service and standing-room only at most pubs.

Gildea’s
An ornate pub with a gleaming mahogany bar, pressed tin ceiling, and an almost-swanky dining room with maroon curtains and white tablecloths. The friendly service tableside and at the bar make even new customers feel like regulars.

Best for: A real sit-down meal on St. Patrick’s Day.

On tap: Eight beers including Guinness, Bass and Sam Adams.

Kwan Thai
Why is the next stop a Thai restaurant? Today’s the day everyone’s a little Irish, so Kwan Thai is throwing its annual Thai-rish Fest, serving corned beef, corned beef pad Thai, banger fried rice and more. Owner Peter Bellhouse’s personality is as exuberant as the restaurant’s colorful décor.

T.F. Noonan’s
Your next stop is a picture-perfect Irish pub, replete with pressed tin ceiling and gleaming wood bar. The heated outdoor patio is an inviting place for Guinness alfresco. The kitchen stays open until 3 a.m., so this is a prime stop for a late-night bite.

Menu highlights: A dizzying array of appetizers, including so-wrong-but-delicious disco fries served with melted cheese and brown gravy. The menu is rounded out by burgers, sandwiches, salads and Shepherd’s Pie.

On tap: Eight beers, including the requisite Guinness.

The Saloon
If you were a wee tipsy, you might get lost in this Victorian-style pub, with its sprawling floor plan, two bars and multiple levels. Free popcorn, a model train overhead circling the bar, a tiny video game room, and a jukebox keep the atmosphere festive night and day.

Best for: Playing WWF WrestleFest and other vintage video games.

On tap: Ten beers, including Yuengling, Bass and Bud.

Murty’s Publick House
You’ve almost reached the end of your pub tour. Here you’ll find a long mahogany bar, dark green walls, friendly and efficient bartenders and a crowd that runs the gamut from young to old. The dining area is made inviting by upholstered booths and a gas fireplace.

Best for: Hanging out with bagpipers.

Menu highlights: No surprises here: lots of bar appetizers, plus an array of burgers and entrees. Traditional Irish fare is featured: Shepherd’s Pie, Irish breakfast, and, perhaps the most filling entrée ever, a plate of Irish sausage, baked beans and chips.

Parade Day: Open at noon. No table service, but hamburgers, hot dogs and chicken wings will be available.

Horse And Jockey
From Murty’s, stroll next-door to this welcoming stop with gleaming wood floors and mustard-and-pumpkin-colored walls adorned with prints of racing horses. One of the plasma televisions is often tuned to horse racing. The dining room is family-friendly and a nice stop for a weekday lunch.

Best for: An expertly drawn pint of Guinness.

Parade Day: Open at noon. No regular menu, just corned beef sandwiches. 107.1 The Peak will do a post-parade broadcast live from the bar.

Defiant Brewing
Neither restaurant nor full-service bar, this craft beer outpost by the train station is open during the week for beer tasting and purchasing of growlers, kegs and half-kegs. The no-frills room is lined with behemoth copper tanks holding microbrews. Pull up a seat at the longest bar in Pearl River, and order a draft or a bottle. Try a bottle of the Belgian Triple, a dry, spicy beer with the complexity of a fine wine.

Best for: A great pint of something other than Guinness.

Menu highlights: Friday and Saturday nights, barbecued ribs, brisket and pulled pork, are available for takeout or eating at the bar.

On tap: A rotating selection of craft brews.

St. Patrick’s Day: Open 2 p.m. to midnight, serving draft beer and bottles. O’Defiant Stout will be on tap. No food.