People are reading
You are at:Home»Food Links We Love»HVRW: Guest Blogger Sharon from The Good Life on X20 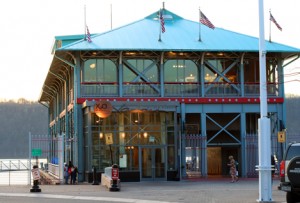 That was me, Sharon, letting out a sigh of relief. See, this entry, in addition to being published at The Good Life, is also being published at Liz Johnson’s Small Bites site for special Hudson Valley Restaurant Week coverage. I volunteered a couple of weeks ago to write about my experience at Peter Kelly’s X20: Xaviar’s on the Hudson and boldly declared, ‘Let the chips fall where they may,’ and ‘Who cares if Peter Kelly is a superstar chef who pals around with Bill Murray, slays Bobby Flay on Iron Chef, and makes Anthony Bourdain actually say nice things about a chef? If the meal is lousy, you’ll hear it from me, because diners need to know which restaurant should earn their $28 come HV Restaurant Week.’

I needn’t have worried: the restaurant, which sits on the Hudson River and has always reminded me of Sandra Bullock and Keanu Reeve’s Lake House, is indeed a winner, and what a relief, because I’ve decided there’s no place in town I’d be more horrified to be blacklisted from than X20.

Simply put: what a marvelous evening! And what huge strides the restaurant has made since the last time I visited for Hudson Valley Restaurant Week two years ago. On that occasion, while the food was very good, two of the three Restaurant Week entrees looked and tasted so similar I left feeling like I had no idea what I could expect from the regular menu if I ventured back for a non-restaurant week dinner.

This time? There were choices galore!

My dining companion Todd and I were seated in the main level of the restaurant (there’s also a smaller dining area upstairs that’s so quiet you can hear a pin drop—avoid the upstairs if possible); within moments, a polished, dapper gentleman deposited menus in front of us, and began telling us about the specials for the evening.

This is when my eyes glazed over and I let my mind wander to the fabulous weather we’ve been having and how nice it would be to take a boat out onto the Hudson and race it under the Tappan Zee Bridge, which had caught my eye through the window. (Normally, I enjoy listening to dinner specials, but this was an exception: I knew I had come out to take advantage of the $28 dinner; it was pointless to get excited about a dish that was going to jack up the price.)

Todd, on the other hand, was having other ideas.

“How much is that rock shrimp appetizer you just mentioned?” he asked.

Our server looked surprised. “Each of the specials I mentioned to you is a part of the Restaurant Week menu,” he said. “You can order any of those and still come in at $28.”

Now I was all ears. This was going to be embarrassing.

“I’m sorry,” I said. “Could you describe the rock shrimp appetizer again?”

It was a rock shrimp risotto in lobster sauce.

Blueberry cobbler. Our server was still smiling, despite having gone through all of the specials twice. A classy guy, our server.

Here’s my point: who would’ve thought that X20 would be serving Restaurant Week specials? The restaurant already had four choices each for Appetizer, Entrée, and Dessert, (normally, restaurants have three, and some offer only one dessert). X20 was bringing the grand total of choices to five. FIVE choices for each course! You go, X20.

Here’s how the rest of our dinner went down: 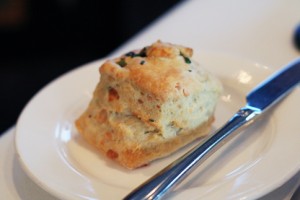 Complimentary gorgonzola biscuit. Nice way to start the meal. The bread guy was also carrying some crusty, delicious-looking French bread, which he said we could have too, but Todd and I stuck with the biscuit.

To drink was a $40 bottle of “Right Banks Red,” a blend, from Hudson Valley Farms right here in New York. The wine distributor, Bill, was extremely happy with our choice, saying he had made it himself. Like a proud papa, he checked on us throughout the evening, curious as to how the wine was holding up through our meal (fantastic). 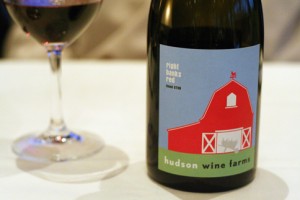 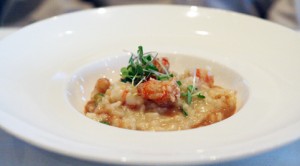 (“See? He listened to the specials,” our server admonished me.) This was a wonderful risotto: rich and creamy, with a slight kick (garlic?), and nice chunky pieces of shrimp.

I stuck with the regular menu and ordered the Spicy Tuna Roll with Avocado: 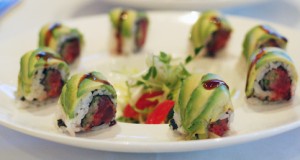 Yep, that’s eight slices there, an extremely generous portion for an appetizer. I’ve ordered tuna at X20 before and deemed it some of the freshest raw seafood I’ve ever had. This spicy tuna was equally fresh, and very well-seasoned. Surprisingly, the little frisee salad in the middle of the plate with the yuzu vinaigrette ended up stealing the show. Each elements was so remarkably fresh, with the yuzu added such a sweet, unexpected ping!. I could’ve easily made a meal out it. 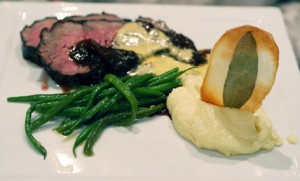 This was very good. I’m convinced Peter Kelly’s strength is steak. So many friends have raved about the masterfully seasoned/grilled piece of meat they experienced at X20 or Restaurant X in Congers. Here, the caramelized shallots and sauce choron (a béarnaise sauce with tomato paste) added a creamy kick. There were also some buttery Haricot Verts with a killer snap, and a waxy, truffled Yukon potato puree (with a whole piece of sage inside a potato chip). A winner.

I ordered the Grilled Loin of Black Hog Pork: 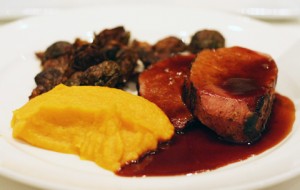 Another generous portion, but I appreciated the understated elegance of Todd’s sirloin to the more in-your-face flavors of this pork dish. Almost unidentifiable on the upper-left are fried brussel sprouts, which I adored, however, I’ve spoken to people who have ordered these same brussel sprouts, really looking forward to brussel sprouts, and then being disappointed when these little fellas rolled out instead. They’re different. I suppose because I had no preconceived notion of what I was eating (I just took a bite and said, “This is good; it reminds me of something. What is it?”), I was delighted to discover I was eating brussel sprouts. If I were expecting brussel sprouts, maybe it would’ve been a different story. Also on the left was a sweet potato and ginger mousseline. The ginger was a bit overpowering, but the flavors still went nicely together. Points for creativity!

And now for our desserts, which were the show-stoppers of the evening.

Over on Todd’s plate, you have Old Bushmill’s Butterscotch Pudding: 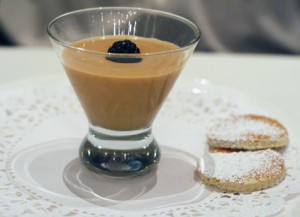 Ie: the best butterscotch pudding I’ve ever tasted, reminiscent of a crème brule. And those little lady fingers on the right? Little pillows. Insanely good. If I had to recommend one dessert on the menu, it’d be this one. I say that even with Peter Kelly’s famous Red Velvet Cake on the menu (I don’t even like red velvet cake, but his cake is something else entirely), and my dessert, which was also killer. 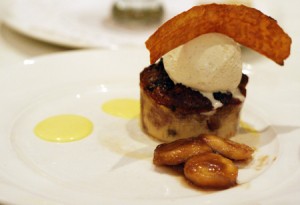 I’ve had delicious bread pudding before, but when I bit into this, I would every so often get a taste of mashed banana that was so. unbelievably. fresh. It tied the whole dish together. Outstanding.

Here’s a pic of two coconut macaroons that accompanied our very reasonable bill: 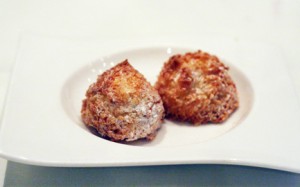 Fellas: X20 is one classy establishment. You’ve got the views, ambiance, a professional staff capable of serving a well-paced meal even during the craziness of Restaurant Week, a superstar chef who likes to come out and greet you (also during the craziness of Restaurant Week), and dishes that are daring in flavor combinations, but still the resemble meat and potatoes you crave.

Here’s hoping you can score a last-minute ressie this week, even if you have to eat at 9:30 at night. It’s worth it.