People are reading
You are at:Home»Food Links We Love»Peter X. Kelly Makes the Short List for the James Beard Award for Best Chef, Northeast

Peter X. Kelly,  chef-owner at X20 Xaviars on the Hudson in Yonkers, Restaurant X & Bully Boy Bar in Congers, Freelance Cafe & Wine Bar in Piermont and Xaviars at Piermont, has been nominated for a James Beard Award for Best Chef, Northeast, for his Xaviars at Piermont. 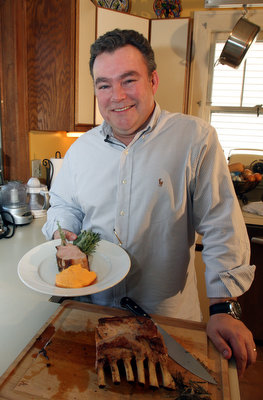 The category includes chefs with restaurants in Connecticut, Massachuttses, Maine, New Hampshire, New York state (not NYC), Rhode Island and Vermont. The other nominees are:

A few other local food professionals have been nominated for the Journalism awards, too.

Tanya Steel of Port Chester has been nominated for  Website Focusing on Food, Beverage, Restaurants, or Nutrition for Epicurious.com. 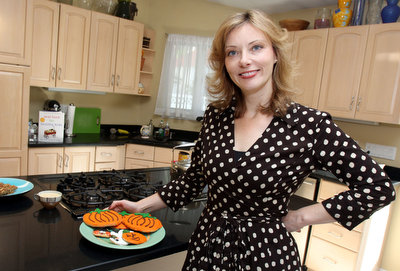 Lettie Teague (a part-time Westchester resident) has been nominated for Writing on Spirits, Wine, or Beer for a column in Food & Wine magazine, “Is Grüner a Great Wine or a Groaner” 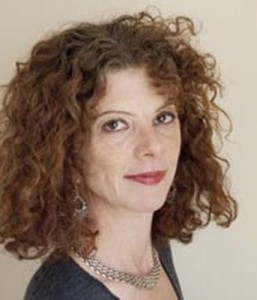 And Alan Richman of Mamaroneck, king of the Beard awards, has been nominated for three categories for his writing in GQ magazine. 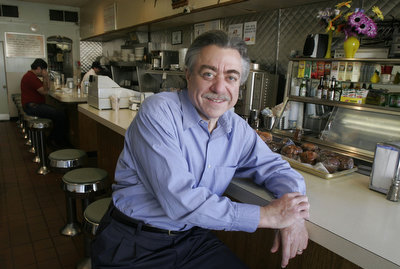 Alan Richman of Mamaroneck used to hang out at the former illage Luncheonette in Mamaroneck, Nov.3, 2004. ( Mark Vergari / The Journal News )

Congrats to all the nominees, but I’m pulling for our local talent! The entire list, after the jump.

New York, NY (March 22, 2010) – The James Beard Foundation is proud to announce the final nominees for the 2010 James Beard Foundation Awards, the nation’s most prestigious recognition program honoring professionals in the food and beverage industries, taking place May 2 and 3, 2010 in New York City. The nominees were announced this morning at an invitation-only breakfast at the acclaimed Palace Café in New Orleans’ French Quarter, hosted by Susan Ungaro, President of the James Beard Foundation, and Dickie Brennan, James Beard Foundation board member and Managing Partner of the Palace Café, Dickie Brennan’s Steakhouse and Bourbon House. This is the second year that the Foundation has taken its nominations breakfast “on the road” and Louisiana, with its rich food culture and history, was the ideal setting. Nominees In 55 categories were announced in the Foundation’s various awards programs – Restaurant and Chef, Restaurant Design and Graphics, Books, Broadcast Media and Journalism, as well as honorees in a number of special achievement awards categories, including Who’s Who of Food & Beverage in America, America’s Classics, Lifetime Achievement, and Humanitarian of the Year.

“Louisiana, a state that has won ten James Beard Foundation Awards in the past, has an incredibly storied food tradition and we were delighted to announce this year’s nominees in New Orleans,” says Susan Ungaro, President of the James Beard Foundation. “We are proud to recognize all of these finalists from across the country and are looking forward to welcoming them to New York City in May.”

The Louisiana Department of Culture, Recreation & Tourism is a Supporting Sponsor of this year’s James Beard Foundation Awards and will be a participant throughout the Awards festivities. They will be presenting this year’s Humanitarian of the Year Award to Taste of the NFL Founder Wayne Kostroski at the annual Awards Ceremony on Monday, May 3, 2010 at Lincoln Center’s Avery Fisher Hall, and Donald Link of New Orleans’ Cochon restaurant will represent Louisiana and join the evening’s chefs at the Gala Reception, which immediately follows the Awards Ceremony.

“Having the James Beard Foundation choose Louisiana as the setting for its nominations breakfast this year is an honor,” says Louisiana Lieutenant Governor Mitch Landrieu. “The local chefs who have been honored by the Foundation in the past have played an important role in our state’s culinary heritage. It is an enormous service to New Orleans to be able to participate in an occasion of such distinction.”

previous years’ Media Awards ceremonies, which did not include the Books category. The James Beard Foundation Awards Ceremony and Gala Reception will take place the following evening, Monday, May 3, 2010, at Lincoln Center’s Avery Fisher Hall in New York City, hosted by Food Network star and James Beard award-winner Alton Brown and two esteemed James Beard Outstanding Chef award-winners, Lidia Bastianich and Wolfgang Puck. Open to the public, the event honors the winners of the Restaurant and Chef and the Restaurant Design and Graphics awards categories, as well as the Who’s Who of Food & Beverage in America, America’s Classics, Humanitarian of the Year, and Lifetime Achievement Award recipients. The Awards Ceremony and Gala Reception are open to the general public, and tickets can be purchased by calling the Awards Box Office at 212.925.0054 or by visiting www.JBFAwards.com. General public tickets are $450

Established in 1990, the James Beard Foundation Awards recognize culinary professionals for excellence and achievement in their fields and continue to emphasize the Foundation’s mission: to celebrate, preserve, and nurture America’s culinary heritage and diversity. The annual James Beard Foundation Awards honor the best and the brightest talents in the food and beverage industries, celebrating outstanding achievement in each of the following categories: Restaurant and Chef, Restaurant Design and Graphics, Books, Broadcast Media, Journalism, and special achievement awards. Each category has an individual Awards Committee made up of industry professionals who volunteer their time to oversee the policies, procedures, and selection of judges for their respective Awards program. All award winners receive a certificate and a bronze medallion engraved with the James Beard Foundation Awards insignia. There are no cash prizes.

The theme of this year’s Awards is “The Legacy Continues,” a tribute to the enduring impact of the standards of culinary excellence set by James Beard himself and all the talented professionals who keep those traditions alive. In a nod to this year’s theme, each of the Outstanding Chef winners honored over the years, including Mario Batali, Thomas Keller, Jean-Georges Vongerichten, Daniel Boulud, Nancy Silverton, Rick Bayless, Grant Achatz, Alfred Portale, Dan Barber, Larry

Forgione and David Bouley, will serve as award presenters throughout the Awards Ceremony on Monday, May 3, 2010. At the Gala Reception immediately following the Awards Ceremony, guests will enjoy a dine-around gala prepared by notable chefs from across the country, each of whom was personally selected by a past Outstanding Chef winner.

About the James Beard Foundation

Founded in 1986, the James Beard Foundation is dedicated to celebrating, preserving, and nurturing America’s culinary heritage and diversity in order to elevate the appreciation of our culinary excellence. A cookbook author and teacher with an encyclopedic knowledge about food, James Beard, who died in 1985, was a champion of American cuisine. He helped educate and mentor generations of professional chefs and food enthusiasts. Today, the Beard Foundation continues in the same spirit by administering a number of diverse programs that include educational initiatives, food industry awards, scholarships to culinary schools, and publications, and by maintaining the historic James Beard House in New York City’s Greenwich Village as a “performance space” for visiting chefs. For more information, please visit www.jamesbeard.org. Find insights on food at the James Beard Foundation’s blog Delights & Prejudices. Join the James Beard Foundation

For cookbooks published in English in 2009

by Donald Link with Paula Disbrowe

Been Doon So Long: A Randall Grahm

The King of Vodka: The Story of Pyotr

Smirnov and the Upheaval of an Empire

Category: Cooking from a Professional Point of View

Araxi: Seasonal Recipes from the

The Fundamental Techniques of Classic

by The French Culinary Institute with Judith

Salt to Taste: The Keys to Confident,

by Marco Canora with Catherine Young

The Pleasures of Cooking for One

by Jesse Price, the Editors of EatingWell

Recipes from the Celebrated Spa

by Dean Rucker with Marah Stets

Recipes from the Author of The

Lidia Cooks from the Heart of Italy

Mastering the Art of Chinese Cooking

The Country Cooking of Ireland

Chop Suey: A Cultural History of

Chinese Food in the United States

Translated by: Maureen B. Fant

Techniques for Putting Up Small

The Seasons on Henry’s Farm: A Year of

Food and Life on a Sustainable Farm

CATEGORIES: COOKBOOK OF THE YEAR

Presented by Lenox Tableware and Gifts

For television, webcast, and radio programs aired in 2009

The Best Thing I Ever Ate: Obsessions

Chefs A’ Field: King of Alaska

Gourmet’s Adventures with Ruth: The

Show: Mexico One Plate at a Time

A Moveable Feast with America’s

The Greenmarket: One Farmer’s Story

For articles published in English in 2009

Column: Back of the House

“The Wonders of Ham”

“The Beauty of the Beast”

“The Price of Tomatoes”

“In Through the Back Door”

“The Art and Economics of Charcuterie,

“Not So Clear Cut”

“How Not to Hire a Chef/The Canning

“A Hunger to Help”

“Throwing Out the Wheat”

“Is Grüner a Great Wine or a Groaner”

For the best restaurant design or renovation in North America since January 1, 2007

For the best restaurant graphics executed in North America since January 1, 2007

A RESTAURANT OPENED IN 2009 THAT ALREADY DISPLAYS EXCELLENCE IN FOOD, BEVERAGE, AND SERVICE AND IS LIKELY TO HAVE

A SIGNIFICANT IMPACT ON THE INDUSTRY IN YEARS TO COME.

TO OTHER FOOD PROFESSIONALS. CANDIDATES MUST HAVE BEEN WORKING AS CHEFS FOR AT LEAST THE PAST 5 YEARS.

A CHEF OR BAKER WHO PREPARES DESSERTS, PASTRIES, OR BREADS AND WHO SERVES AS A NATIONAL STANDARD-BEARER FOR

CANDIDATES MUST HAVE BEEN PASTRY CHEFS OR BAKERS FOR AT LEAST THE PAST 5 YEARS.

EXCELLENCE IN FOOD, ATMOSPHERE, AND SERVICE. CANDIDATES MUST HAVE BEEN IN OPERATION FOR AT LEAST 10 OR MORE

A WORKING RESTAURATEUR WHO SETS HIGH NATIONAL STANDARDS IN RESTAURANT OPERATIONS AND ENTREPRENEURSHIP.

NOMINATED FOR A JAMES BEARD FOUNDATION CHEF AWARD IN THE PAST 10 YEARS.

A RESTAURANT THAT DEMONSTRATES HIGH STANDARDS OF HOSPITALITY AND SERVICE. CANDIDATES MUST HAVE BEEN IN

OPERATION FOR AT LEAST THE PAST 5 YEARS.

A WINEMAKER, BREWER, OR SPIRITS PROFESSIONAL WHO HAS HAD A SIGNIFICANT IMPACT ON THE WINE AND SPIRITS INDUSTRY

CANDIDATES MUST HAVE BEEN IN THE PROFESSION FOR AT LEAST 5 YEARS.

A RESTAURANT THAT DISPLAYS AND ENCOURAGES EXCELLENCE IN WINE SERVICE THROUGH A WELL-PRESENTED WINE LIST, A

KNOWLEDGEABLE STAFF, AND EFFORTS TO EDUCATE CUSTOMERS ABOUT WINE. CANDIDATES MUST HAVE BEEN IN OPERATION FOR

INDUSTRY IN YEARS TO COME.

CHEFS WHO HAVE SET NEW OR CONSISTENT STANDARDS OF EXCELLENCE IN THEIR RESPECTIVE REGIONS. EACH CANDIDATE MAY

BE EMPLOYED BY ANY KIND OF DINING ESTABLISHMENT AND MUST HAVE BEEN A WORKING CHEF FOR AT LEAST THE PAST 5 YEARS.

THE 3 MOST RECENT YEARS MUST HAVE BEEN SPENT IN THE REGION WHERE THE CHEF IS PRESENTLY WORKING.

Café Boulud at the

Presented by The Coca-Cola Company

RESTAURANTS WITH TIMELESS APPEAL, BELOVED IN THEIR REGIONS FOR QUALITY FOOD THAT REFLECTS THE CHARACTER OF THEIR

COMMUNITY. ESTABLISHMENTS MUST HAVE BEEN IN EXISTENCE AT LEAST 10 YEARS AND BE LOCALLY OWNED.

Founder, Taste of the NFL