People are reading
You are at:Home»Food Links We Love»HVRW: Jeff Marx on Half Moon

Hello guest blogger Jeff Marx here. I am a web developer in the Journal News’ online department. When I’m not writing/editing code for the Journal News/Lohud.com, I enjoy snow skiing, hiking, and of course .. eating.

I have been working here for about four years now and most of my time is spent maintaining this and Lohud.com’s other 40 blogs. For my Hudson Valley Restaurant Week review, My co-worker Larry Vollmer recommended a place in Dobbs Ferry called Half Moon because of its great views and amazing food. My date and I were not disappointed.

I really liked the atmosphere of this restaurant as it had the feel of a really elegant place, but it was still laid back enough so that it didn’t seem stuffy or elitist. The restaurant sits right along the shores of the Hudson River so it featured a spectacular views out of the window that was facing our table. But since it was pretty late at night, I couldn’t get a great picture, so you’ll just have to take my word on that. The lights were dim and the tables were spread out nicely. Putting little candles in the center of the table was a really nice touch. Now to the food. 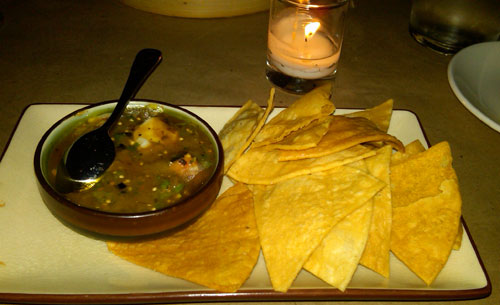 My date had Shrimp Ceviche for her appetizer, which is a spicy shrimp dipping sauce. She had the dish before and said that is the first time she had it with tortilla chips, but she thoroughly enjoyed it nonetheless. 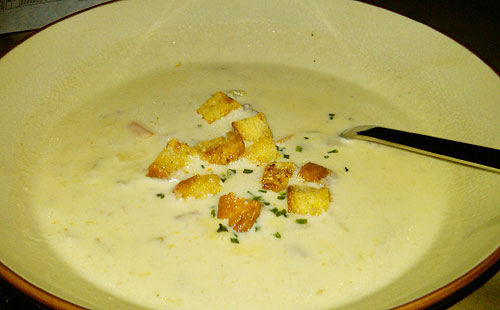 For my appetizer I decided on New England Clam Chowder. Having spent quite a bit of time in Vermont, and all over New England, I was pretty curious as to how this Westchester restaurant would fare with my favorite soup. They did a fine job as the the soup was creamy yet not too thick and the soup had a lot of flavor but it wasn’t too salty (which is a common mistake), They also included just the right amount of potatoes. The only complaint that I had was they could have filled the bowl a little higher.

I was in the mood for steak so I ordered the Skirt Steak Chimichuri for my entree. The skirt is not my favorite steak cut but they cooked and prepared it perfectly and it was as tender of skirt steak as I have ever had. Those kinds of cuts are usually pretty tough. The Chimichuri sauce added a really unique flavor and it all went well my cabornet glass of wine. The Mashed potatoes were a little lumpy and had a few too many chives in it for my taste, but it was good. And I’m not big on vegetables, but the aspargus did have a nice buttery taste to it.

My date ordered the Day Boat Scallops for her entree. She thought the scallops were a little on the bland side. But she said the addition of the rice and pasta gave the dish some good flavor.

For dessert they gave us a sampling of Strawberry Shortcake, Chocolate Brownie Sundae and Carrot Cake, which paired with some decaf coffee, made for a pleasant end to the evening. 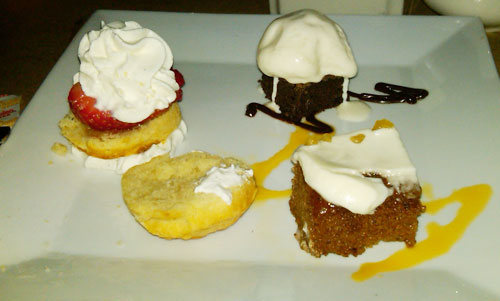 I would definitely recommend this restaurant to anyone who is looking for a good meal and a nice setting. And I’m really looking forward to trying this place on a hot summer evening to try the outdoor seating.