People are reading
You are at:Home»Food Links We Love»HVRW: Liz at Ruth’s Chris Steakhouse in Tarrytown

For my next stop on the HVRW restaurant train, I headed to Ruth’s Chris Steakhouse, which is in the Marriott Hotel in Tarrytown. We got to sample the entire HVRW menu, plus a few extras from the regular menu, too. Here’s a look at our feast! 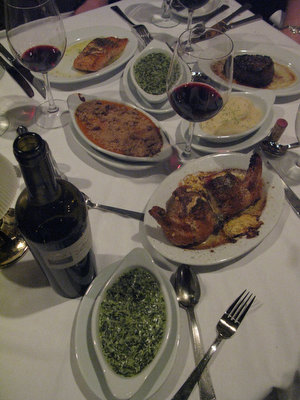 The restaurant was mobbed. I don’t know that I’ve seen a busier restaurant during HVRW. The bar was packed, and the dining room was turning tables left and right. We sat in the upper dining room: 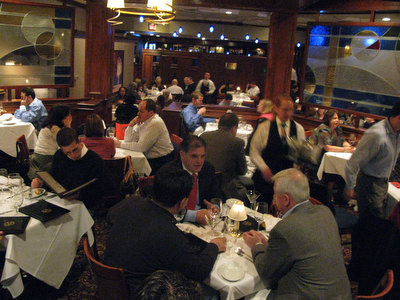 More food and room photos, after the jump:

So as I said, we sampled the entire menu, plus a few extras. This, the seared ahi with sesame and ginger, was an extra: 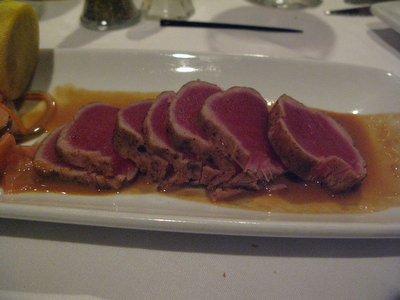 It was rare but not cold, and cut and seared nicely.

These two were the appetizer choices for HVRW. The Steak House Salad: 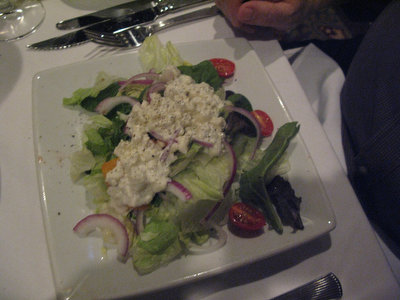 (That one is dressed with blue cheese.)

And the Louisiana Seafood Gumbo: 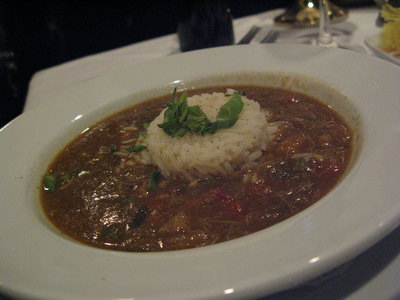 I bet you’re wondering why they serve gumbo at a steakhouse. Because Ruth’s Chris Steakhouse comes from New Orleans. (You’ll see a sweet potato casserole coming up, too.)

And our lovely waitress, Mary, explained why it’s Ruth’s Chris with an apostrophe after the first word. Mary’s story was that Ruth’s original steakhouse burned down, and she wanted to buy the one owned by Chris. He agreed, but said only if you keep his name attached. So she just hung a sign above the old one. The Web site says a different story: that Ruth had already bought Chris Steakhouse, but THAT one burned down. When she built a new one, she had to keep the name because of the original contract with Chris, which required her to keep his name on the restaurant. 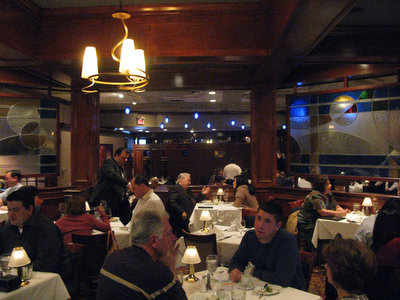 Now on to the entrees. The HVRW menu offers a choice among petit filet mignon, North Atlantic salmon (blackened or broiled) and chicken breast stuffed with garlic herb cheese and drizzled with lemon butter. I must say, for a steakhouse, I was a little disappointed there wasn’t more than one steak choice on the menu. I know you can’t afford to send out a ribeye, but what about a half a strip? Or a skirt steak or a flank steak or something?

Funny, though, that I’m saying that, because the chicken was the best dish of the night. 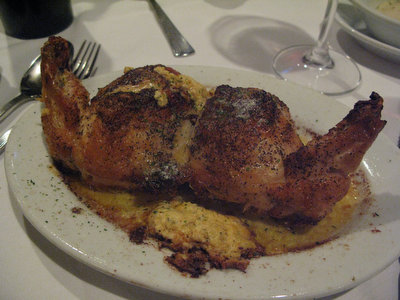 Garlicky, herbaceous and juicy with crisp skin and a ton of flavor. It was better, even, than the steak, which I stupidly forgot to get a closeup photo of. (It’s in the big table photo, though.)

Here’s the salmon. We chose broiled. 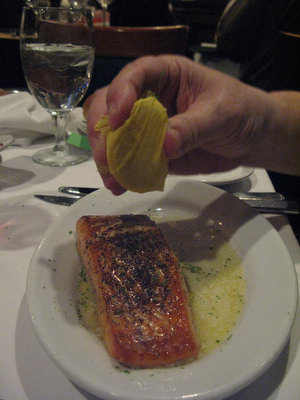 It was fine. Flaky and not overcooked. I’m getting a little tired of salmon during this HVRW, I must say. Probably because of my generosity, though. I always let my guests choose what they’d like to get first, and then I take what hasn’t been ordered. I somehow keep winding up with the salmon. 🙂

The sides that came with HVRW were garlic mashed potatoes or creamed spinach. We got one of each — 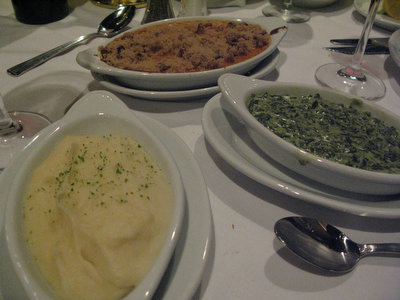 — plus an extra off the regular menu, the Sweet Potato Casserole with Pecan Topping: 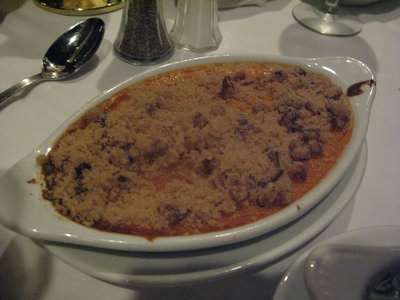 That was the best side dish. It was sweet, but not too sweet, with a nice crunch. I want the recipe for my Thanksgiving table. Here’s our supper. The steak is at 7 o’clock:

We ordered a Simi Cab from Alexander Valley from the blindingly expensive wine list. That wine was among the cheapest I could find, and it was $88. There were a few wines in the high $50s, but those were for bottles I can get for $8 at my local shop. The Simi sells for around $20 or $25. It was a winner with the meal.

There was just one choice for dessert, the chocolate mousse cheesecake: 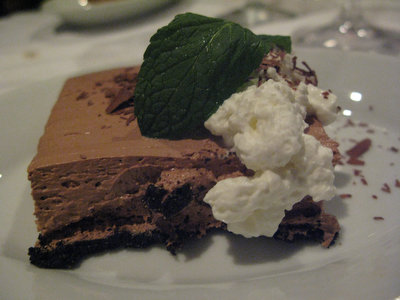 And here’s the second round of diners in the lower dining room: 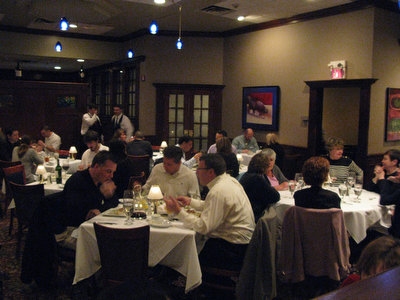 We also ran into a ton of electrical workers who were on loan from their companies fixing all our downed power lines last week. They just paraded in, one after another, into a private dining room for dinner. I’m sure they were happy to get a big steak after that work.

So all in all, I liked Ruth’s Chris. I’m not really a big steakhouse girl, but I think especially if you have friends or family visiting, and they’re staying at the hotel, it’s a great place to get together. And I was happy to get to try it during Hudson Valley Restaurant Week. Kudos to them for participating.

The 411 on Ruth’s Chris Steakhouse.