People are reading
You are at:Home»Food Links We Love»Liz at Il Portico in Tappan: A Sort of HVRW Post

This post on Il Portico in Tappan is not going to as helpful for HVRW as I would have liked. I forgot to ask when I made the reservation, and no, they were not participating in HVRW on Fridays and Saturdays. But what are you going to do, get up and leave?

We put together a mix of appetizers and entrees that ended up costing about the same, by the way. And the wine list at Il Portico is surprisingly affordable. We ordered two bottles of wine among four people and each was less than $30.

On the way out, I asked for the HRVW menu. So I’ll include it at the end of the post, should you choose to go today or Sunday.

I started with the beef carpaccio: 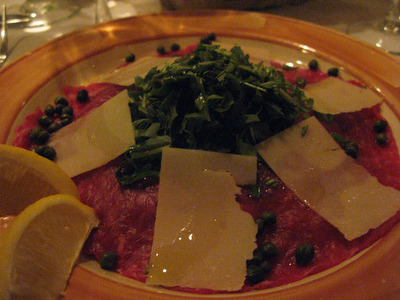 Nice lemony dressing on the arugula. It wasn’t cut quite as thin as I’m used to, but it was still easy to chew.

I like carpaccio because it reminds me of a funny story from my college days. Well actually, just post. I was living in Paris, subletting an apartment in the Marias, and my sister was staying with a family in Trocadero while she was studying abroad.

We spent a lot of time together, but a lot of time apart, too, so when I was getting ready to trade in the apartment for a backpack and a year-long trip to Asia, we decided to have a celebratory dinner before I left. We went to an Italian restaurant. (Please. Don’t ask. I wasn’t really that into food then. I survived on baguettes and boursin.)

We got a table outside. We decided to be adventuresome and order carpaccio. We didn’t know what it was, but guessed it might be a kind of pasta.

Imagine our surprise when it came to the table: a plate of thinly pounded raw meat. We were not experienced eaters at the time, and we were repulsed. We didn’t know what to do. We didn’t want to seem like idiots, especially in front of a snooty French waiter.

So my sister took a few pieces of meat off the plate and put them in her napkin. She called the waiter over. I don’t remember who did the talking, but we still quote what was said: “This is the WORST carpaccio we have ever had. We demand you take it away immediately!” Nothing trumps snooty like snooty.

So I always think of that whenever I order carpaccio.

My husband got the Caesar Salad: 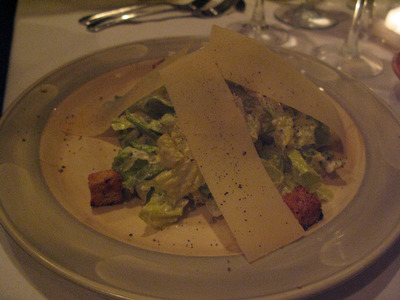 Fresh, crisp lettuce. Not too overpowering of a dressing.

My parents shared a salad. I did not taste. 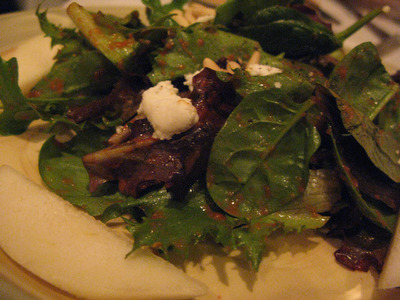 For our entrees, we all got pasta (well, I got rice). My dad had the orecchiette with broccoli rabe and fennel sausage: 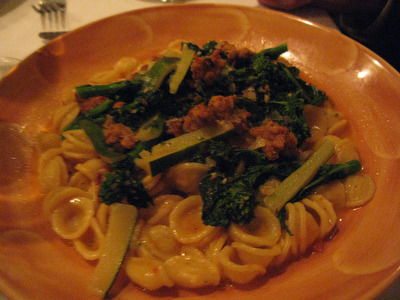 Good but a little oily on the topping.

My husband got the linguine with red clam sauce: 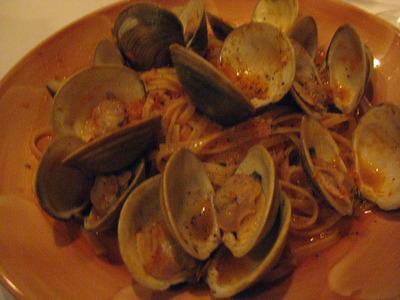 Good clams. Fresh. Not sandy. And it’s nice to serve them in the shell.

My mom got the papardelle with veal bolognese. 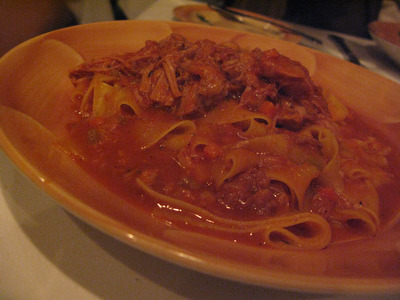 The winner of the night. Hearty, meaty, with al dente pasta. Braised for hours, I’m sure.

And I got the risotto with fava beans and beets. 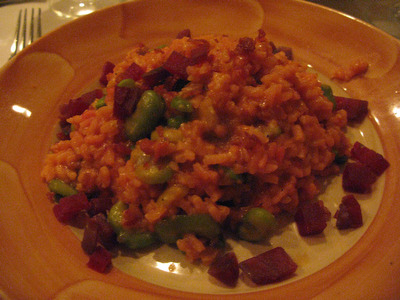 It wasn’t as elegant looking as I’d hoped, but not a bad flavor. It’s nice to have favas in your life again… spring is almost here!

So my trip to Il Portico wasn’t an HVRW trip, as I’d hoped, but we made the best of it, and had a really lovely meal for about the same price. 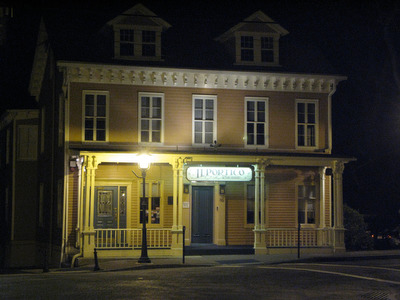